In previous Elder Scrolls games, weapons and armour would have their quality degrade and you would have to repair it with the Armorer skill to fix it. This provided a constant stream of experience which made reaching level 100 Armorer quite natural.

In contrast, Skyrim does not have weapon or armour condition ratings, and the only way to advance Smithing is through creating and improving vast amounts of new equipment. From a roleplaying perspective, this can seem a little contrived. I would like to know the following:

No. Making Daedric Armor grants you the same experience as making an Iron Dagger. The quickest way to level is to travel to a town, buy out their iron and leather. Use those to make as many Iron Daggers and Leather Bracers as possible, and move on. Doing the same with gold -- the physical stuff -- is profitable and easy to do with Transmute. Enchanting the results is very profitable. The biggest roadblock on your way to smithing godhood is that dozens of daggers and gloves become heavy quickly.

After doing that a few dozen times, you are now the greatest smith and enchanter in the land, rich as sin, and can make magical armor out of dragons. 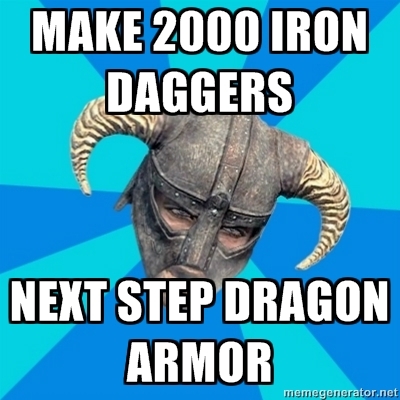 (My apologies, but it's true, you know.)

No, same as above.

Does smelting bars of higher-level metals such as ebony carry a significantly higher experience reward to lower-level metals, such as iron?

No. In fact, smelting doesn't even grant experience (neither does tanning leather).

One thing that does make a difference is that making new items grants more experience than improving old ones.

(Also, FWIW, the exploit in Oblivion was to hotkey up a bunch of bows and arrows, then fire one arrow apiece and repair ad nauseam. IMO, Skyrim got the smithing part totally right as weapon endurance was annoying, but there should absolutely be incentives to produce better equipment.)

While making iron daggers and leather bracers is the most economical way of increasing smithing and generating enchanting targets, there is a benefit to making the better gear.

Speech increases based on the amount of gold transacted. Buying/Selling, doesn't matter. If you buy good materials, craft/enchant with them, and sell them back... You'll get more gold movement per soulgem than when you work with iron daggers.

while most people say that iron daggers and leather bracers are the best way to up your smithing, that was patched and now, i have found that making dwarven bows and armor are the best for experience (unless you can craft glass then glass bows are better but the materials are harder to find).

20
How does value affect the gain of smithing experience?

55
What is an effective way to level smithing?
10
What is pickpocket experience based on?
6
Do you gain more experience on higher difficulty levels?
4
Smithing doesnt go over 100
4
Smithing Enchant Not Working?
20
How does value affect the gain of smithing experience?
9
Are the attack speeds of weapons offset by their damage output?
0
Smithing capacity?