What is veteran status, and how do you get it?

I noticed that in my battlelog (listed below my platoons) I have a veteran status for BF3 and BattleField Play 4 Free.

From the Battlefield Wikia:

Battlefield 3 is now the fourth game in the series to use the Battlefield Veteran system. If someone has played an older Battlefield game, they can receive the M1911 pistol in the game just by registering an old Battlefield game to the website www.battlefield3.com/veteran. It also unlocks two variants of the M1911, the tact and suppressed versions.

I'm not certain how one logs into the Veteran site to register other games, as the link provided just redirects to the BF3 site. Some folks apparently have 10 or more Veteran Points, and supposedly it's possible to make your veteran status show on your dog tags.

Your veteran status is based on how many other games in the series you have played. Certain games offer rewards based on your Veteran status, Bad Company 2 for example gave you the M1 Garand for use in the multiplayer.

Originally I think you had to register the game to your account on www.battlefield3.com/veteran but now a lot of it is tracked automatically based on whether you have multiplayer stats on the EA servers.

You earn Veneran status by adding games (activation code) to your Battlefield or Orgin online profile. For example I log in on battlefieldbadcompany2.com/veteran and I see something like this... 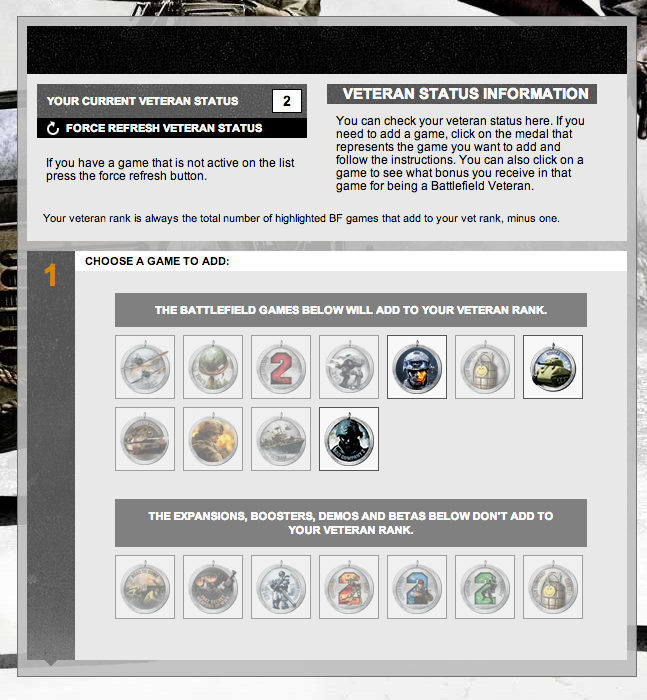 If you have Orgin by adding game code on this site or in app - but I'm not so sure.

List of games that can give you Veteran status;

3
Is the M1911 still a bonus gun after signing up for EA Origin account?

8
What do these bars below my inventory at the Deploy screen in Battlefield 3 mean?
6
How can I get Battlefield 3 to play nice as a Steam shortcut?
3
Are you awarded points for reparing vehicles?
31
You have died from… 'Bad Luck'… What actually killed me?
1
Why are there PC players playing in PS3 matches?
3
How does one subscribe to BattleField 3 Premium Events?
3
How can I unlock dogtags for Battlefield 3 if I own other games in the series?
2
Battlefield 3 Network Problems (Lag)