What does the “Weapon Damage: X%” skill statistic actually mean?

Some skills list "Weapon Damage: X%" as one of their stats, for instance in the second circled area in this screenshot: 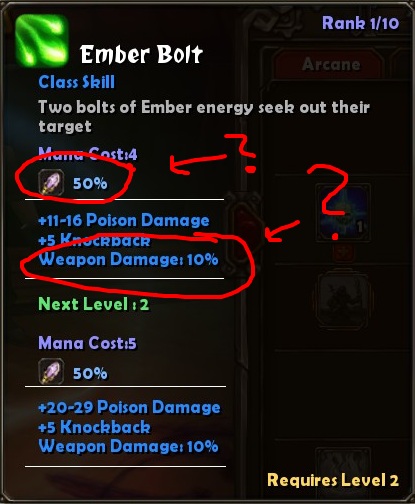 What does it mean? Does it mean every attack with the skill deals an additional percentage of the weapon I'm currently wielding?

What happens when I'm dual-wielding weapons? Should I strive to wield just one powerful weapon instead of two weaker one to maximize spell damage?

And does the weapon attack speed make any difference? Should I aim for higher-damage over higher-DPS weapons if I want to maximize skill damage?

Yes, that means that 10% of your weapon's damage will be applied to this magical attack. Therefore, wielding a stronger weapon will yield more damage from this spell.

When it comes to dual wielding, the effects vary, there's a list of the Alchemist skills that benefit from dual wielded weapons on this Torchlight Wiki.

According to one Torchlight wiki, your weapon attributes impact your spell attributes in the following way:

Unfortunately, actual data about the game mechanics and formulae is spotty at best and outdated at worst.

7
What do the skill percentages in the description of some skills mean?
11
How is skill damage calculated?

7
Wand Damage Increased by Which Attributes and Skills?
20
Should I always equip a weapon in my free hand, even if it is a weak one?
5
How does the Ricochet power work?
6
What does dual wielding do, without the Dual Wielding talent?
7
What do the skill percentages in the description of some skills mean?
11
How is skill damage calculated?
4
I've defeated the Overseer. Now what?
11
How do you calculate the total damage output?
8
What do the horse's messages mean?
7
what is the green trailing glow on enemies?