Is it possible to make memory card loads faster with ePSXe?

I've googled around for this but couldn't find a result. Besides using the quick-save/load feature of ePSXe, is there a way to make the memory card become "detected" quicker for certain games?

I'm playing FF7 again, and I like to use the save points as kind of a peace-of-mind backup. When I go to save though, the memory card takes like 5 seconds to become "detected". Is there a way to speed this up, ignoring the quick-save answer?

If it helps, I'm currently using Pete's OpenGL2 Driver 2.9 for my Video plugin. Here are the settings: 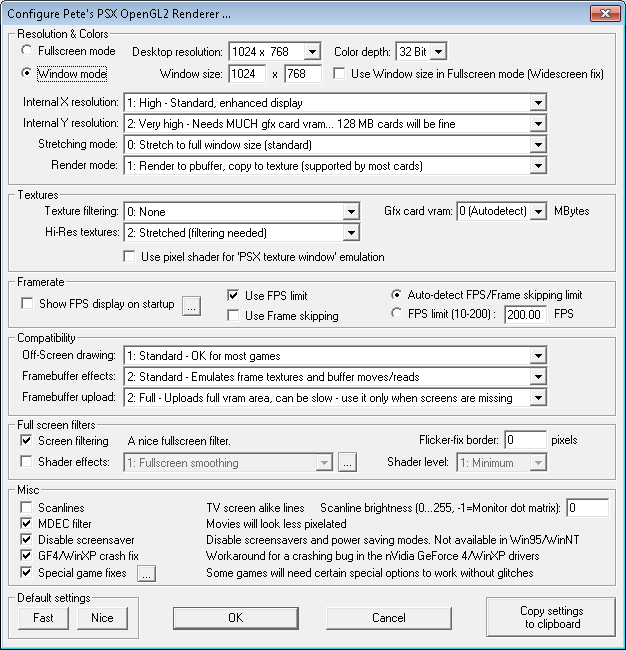 OK, so I messed around with the FPS limits as per Xkeeper's method, and successfully toggled the frame limiter between all 3 states. The only noticeable difference that happened is that in the FL2 state, the FPS stuck right at 59.8, while the others just hovered around 60. Is there a way to change the 59.8? I've tried changing all combinations of the radio buttons regarding the framerate in the settings image above, with no success. The [...] button simply leads to button mappings. I guess this question could be interpreted to the following now: Does anyone know how to fast forward with ePSXe, or forcibly set the FPS?

An alternative option I've found is to try to switch to PSX Emulator, which has a fast forward button on the spacebar, but I'd rather not do that.

Depending on what graphics plugin you're using, you might be able to disable the framerate limit (which will speed up the game, normally). It varies based on plugin and version, but some hotkeys to try are F4 (toggles limit in ePSXe >= 1.7.0), 9 (unknown versions), and the later F-keys (F9 to F12), which adjust the frameskipping/limiting settings.

Check your video plugin's options screen to see what options it gives you.

An ideal emulator acts as close as possible to the original hardware when playing the game, so the issue you're describing, where memory cards take a lot of time to read, is probably an issue with the Playstation software or the game themselves. Aside from reverse engineering either of those, which I believe is beyond the scope of most people, there isn't anything you can do to alter the behiviour you're describing.

However, the fact that you're emulating the hardware, rather using the actual hardware, allows for some sort of workaround. I would check if your emulator or any other emulator allows for speeding up the emulation. This way you can force the emulator process to run faster momentarily, specifically when laoding the memory cards, to allow the process to finish quicker.

Another alternative, for Final Fantasy VII, at least, is to play the PC version. It doesn't allow for save states but is rather fast saving games.

Not the answer you're looking for? Browse other questions tagged emulation epsxe .

5
How can I run a .BIN file with the ePSXe emulator?