How do I complete the Snow Ballin' Achievement?

How do I get the Snow Ballin' achievement in CrimeCraft GangWars?

You complete it by getting 200 points in total in Snow Brawl matches.

After you've signed up on a realm, you might want to do a practice round first for the basic controls. They're not very complicated though, and you can jump right into the Snow Brawl event, by clicking the gun icon, selecting the events tab and pressing the FIGHT button below Snow Brawl. Here's a visual guide: 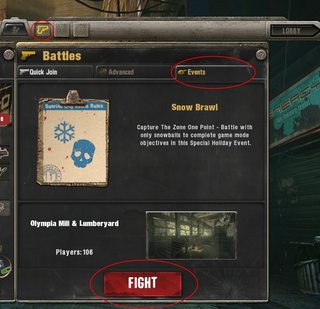 It's your basic third-person shooter. The Snow Brawl game mode is one of CrimeCraft's other game modes, but nobody has any ammo, and everyone has infinite snowball grenades.

However, note that round points do not count towards the achievement — for example, if you get a game mode with control points, holding them will not be your objective for the achievement.

You do get (personal) points for:

Anyway, on to the killing. In this game mode, any and all weapons are disabled, but you have a snowball grenade, which is Ability #1 (bound to F1 by default). This is incredibly awkward, so you might want to rebind it to something more accessible, like, say, the F key.

All that remains is to throw said grenades at jerks that are not your color. Some tips:

After you've accumulated 200 points in total, the achievement will unlock.

On the battle menu, there should be a tab all the way to the right titled "events" the snow ball brawl event will be there and all you have to do is hit battle.

Not the answer you're looking for? Browse other questions tagged achievements .