Which Zerg units beat that ball?

Which Zerg units would be good to counter that Protoss group? 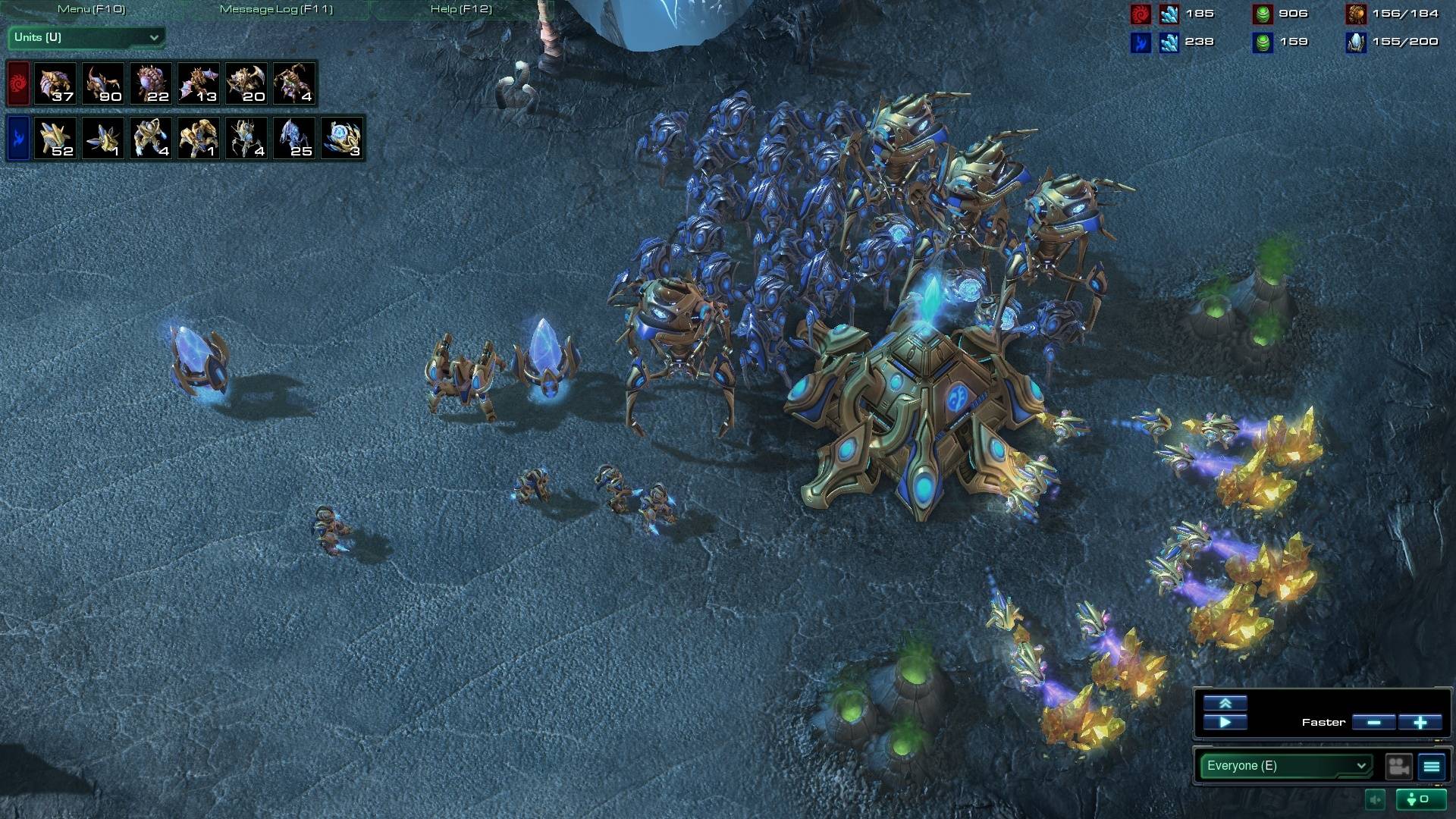 It depends on what tier you've reached at this time:

Some hint when you want to attack:

Why you need to counter him? Protoss looks peaceful :) take 12 mutas - kill few probes on gold expansion. His death ball (I believe whole) will move to your mutas - fly to his natural. Once death ball move to natural - attack his expansion with roaches...

Kill few stalkers here and there, but your main goal should be: damage to opponent economy... yes you will loose something, but he will too. keep expanding and producing stuff... eventually he will go out of minerals.

One question I would ask.... why does the Zerg only have 37 drones? That brings me to the focus of how to counter this composition - macro.

From the descriptions if the game, it seems like the Protoss has three bases, one of them a gold. To get this costs money and time. Additionally, his army costs, in total, 5150 minerals and 1900 gas. This is an exorbiant amount of minerals and gas, and certainly enough to delay him for quite some time. In this time, what was the Zerg doing? He only got to Lair tech. He had most of his gas spent on mutas, which were clearly not doing much as the Protoss was approaching twice as many workers as the Zerg, and that not even enough to saturate all of his three bases. By this time, the Zerg should have about 80 workers and four or five bases up. In the time it would take for the Protoss to amass this force, the Zerg could have 2-2 roaches, infestors, a few corruptors and brood lords.

As to specifically what would counter that force, it is the macro'ed up force I just described. In this case, roaches would tank, infestors would fungal to ensure a large majority of the stalkers could not blink under the brood lords, the brood lords would sit back and rain hell and broodlings upon the Protoss, the corruptors could take potshots at the colossi, and the Protoss would not be able to do a thing. Supported brood lords can essentially take down any non-Stargate supported Protoss force. In the amazing event this was not enough, the Zerg could rally enough roaches from his many bases to take out what's left and take out the gold expansion.

In summary, the way to beat this force when you see the Toss turtling to amass it is expand like crazy and tech up to infestors and brood lords. By the time he attacks, you will be ready, and will be able to remax instantly if the battle goes ill. This Zerg, frankly, has done all the wrong things - not enough drones, not enough roaches, too many zerglings (they are worthless versus upgraded colossi) and too many mutas, which suck up gas and will contribute little in battle in terms of tanking or damage while soaking up precious gas. So do these things, and you should be able to crush that Protoss deathball.

Corrupter + roach/hydra would work. The colossus can be sniped down fairly easily. Roach/hydra can handle mass stalker pretty easily.

It might sound stupid, but you should not let him max out.

Here are some strategies that will not let him get this ball:

Should you still hit the late game try to get this composition:

When you hit 200/200 attack. He should not be maxed out. Repeat until he is dead or has no more money.

17
What are the best counters for Zerg air units in Starcraft 2?
9
Are Immortals useful against any Zerg unit?
5
Strategies against zerg when playing protoss
6
Counter mass Thor + SCVs as Zerg
6
What zerg units counter Archons after patch 1.3.3
7
Zerg strategy against Void Rays in SC2
6
Can Terran Medivacs heal allied units?
2
How do I deal with a protoss army containing high templars as a zerg?