How can I earn lots of credits?

On reaching level 20, I was advised to 'start saving up' for Speeder training by a tutorial popup. And looking at my class skill trainer, high level abilities cost... well, they cost what seems to be an astounding amount of money to my low level self.

What's the most efficient way to earn lots of credits in The Old Republic?

I spent some days with my guild running missions and the new results are in:

Pre-nerf, we estimated the best missions to get us about ~5.5k/hour. At the moment, we're looking at about ~1.8k/hour at most. Keep in mind, this is from low-level missions and as those are very short, there will be more downtime between missions so the end result will be quite a bit less than that. 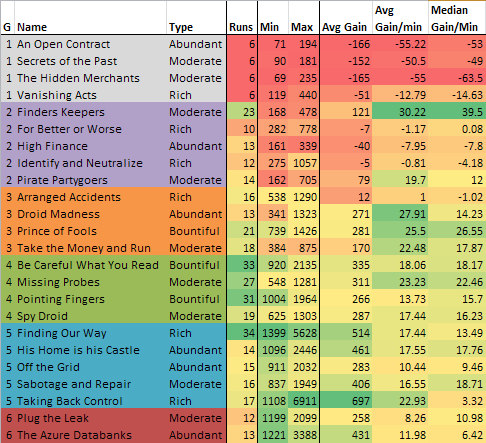 This answer is out of date.

With the recent nerf to Slicing, it is, at best, breakeven to run lockbox missions. Slicing can still be a money maker thanks to slicing nodes in the open world, and, accounting for crits, if you only run bountiful lockbox missions so I'm keeping this answer up, but it's hardly the best way to earn money anymore.

So far, the best results I've had have come from Slicing. Before I get into what makes Slicing so effective, I want to point out why I've had limited success with other tradeskills:

Other Gathering and Mission Skills have two key issues. Firstly, here's an upfront investment, in credits, required to do any sort of substantial gathering. This puts a floor on the price for which you can sell your goods at a profit, and that floor is actually fairly high. Furthermore, the Galactic Trade Network is atrocious. The UI is horrible for searching for specific items or for selling or purchasing decent sized quantities. What this means is that for you, the seller, your pool of available buyers has shrunk. Worse yet, because the game is so new and the economy is not yet mature, there are a ton of people simply dumping these materials on the GTN at 'below cost' - they're just trying to recoup some of their investment as they power through to the next skill tier, or dump the mats they didn't end up using while leveling Synthweaving or Armsmech or whatever.

Crafting skills are in a similar bind - while these are likely going to be the most profitable in the long run - especially with the ability to sell 'crit' crafted items with an extra augment slot - as of now, crafting requires a fairly massive upfront sink in both time and credits. Furthermore, most crafted goods are easily replacable by items from token vendors. Simply do a few warzones or flashpoints or some quests, and you'll be swimming in mods and orange gear to slot them in. Additionally, an immature economy means there isn't much demand for high level items just yet, and the market for low level stuff is flooded. Add to this the aforementioned problems with the GTN, and crafting, while it has a high potential upside, again lags behind.

Which brings us to Slicing. First off, I want to be clear here: Slicing isn't spectacular money, and it's not particularly fast money, but what it is is easy money. That is to say: Slicing is great because it doesn't require any interaction with the larger economy, is reliably profitable, and delivers it's rewards directly in the form of credits.

So, How do you make money with Slicing?

It's pretty simple really. The key is to, first off, always be running missions (obviously), and specifically, always be running missions that reward Lockboxes - especially those labelled as Rich and Bountiful. Interestingly, higher level missions are not always more profitable. For example, the bountiful missions listed as levels 41-48, His Home is his Castle and Off The Grid, will yield a smaller profit than the level 33-40 bountiful missions, Be Careful What You Read and Pointing Fingers. While they are still profitable (and thus, worth doing for the skill increase if that's of value to you), they will make you substantially less money than alternatives.

This Spreadsheet, compiled by the excellent folks in <Revenge of the Jerks> does an excellent job of laying out exactly which missions are the most profitable, both in terms of raw credits, and in terms of credits/minute.

TL;DR: Slicing provides the simplest and easiest way to make tons of credits with a minimum of fuss. While other professions will eventually be more profitable as the game matures, at this time, Slicing clearly provides the most reliable monetary benefit - and should continue to be a no-fuss, no-muss, reliably profitable option for solo players as time goes on.

I just ran my level 22 daily space missions (all 5 of them), with the daily quest rewards. It took 30 minutes.

This activity yields ~17000 credits/hour with the daily space missions at level 22.

One of the missions awards 600 credits for completion and can be run in 6 minutes. Another one awards 300 credits for 3 minutes. Repeatedly running either one gives 6000 credits per hour without the daily space missions at level 22.

The most efficient and quickest way to earn credits in the end-game comes from dailies and the new(4.0) Heroic quests system, and for the more active player; Operations.

Other ways to earn credits are:

Slicing and Treasure Hunting are great for money, I recommend both.

I've had some good results selling guns on the GTN, but nothing so far has compared to just running the missions. Every new planet (and level) seems to result in so much more money that hanging out examining prices doesn't pay off.

If you dig the money game, that's different. But the quests seem to hand out good enough cash to pay for speeders & skills, provided I don't get too spendy on crew skill missions.

You can do the following things as said in this guide to making millions of credits:

At this fancy site (maybe the official website for swtor?), it says to do (Full explanations at site):

I've found that the gtn is the best way to make money. i agree that missions, warzones, and flashpoints give a good amount of money (especially with the dailies) but selling any unwanted, unbound items at the gtn gives you lots of money. just pay attention to how much the other players selling the same item are selling it for and even if you down your price a bit it will still make you plenty back.

if you craft and do crew missions like treasure hunting, archeology, etc. and sell anything you don't use you will make lots of that money back. selling things you craft will make you tons of cash as well (especially when you start crafting prototype and artifact items).

just note you will need a bit of starting cash to sell items on the gtn though, but as an example, i had about 5-6k credits to start, after putting a couple artifact items on the gtn, i came away (after they were sold of course) with 50k+ credits.

certain items (like tatooine flamegems) sell in small groups better too so watch that as well. selling the same thing over and over can help as well so you can see how much you can put up as a price and still sell. and always keep in mind supply and demand (especially demand).

do note also that however long you put an item up, if it doesn't sell the first time just keep putting it up, it will sell evetually. you get your deposit back every time the item expires so you can put it up as many times as you want. also, if it doesn't sell and expires you can adjust the price when it expires. just don't cancel a sale once it's up or you'll lose your deposit.

again with this i've made quite a bit of extra money and it has worked very well for me so far. little work but big payoff.

Not the answer you're looking for? Browse other questions tagged star-wars-the-old-republic .

0
As a level 35 sith juggernaut how do I make credits fast
10
Which crew skills are appropriate for each class?
14
What is the exact effect that affection has on companions?

8
How can I sell all my vendor trash easily?
9
How can I improve my social skills?
8
How can I rewatch the intro movie?
10
Are flashpoints the quickest way to earn social points?
4
Ways to earn experience-points
3
How can I toughen Qyzen Fess?
2
What is the easiest way to earn a few more Dromund Kaas commendations?
3
How can I handle inappropriate behaviour?
7
Paying credits after a failled spacemission