I've seen a "world boss" referenced several times, but have yet to see any quest that leads to something that seems like a "boss" for the world. So what's a world boss?

Basically, they are "world-level" bosses (not found in instanced, repeatable adventures) that require more than a 4 person party. Usually an operation of 12-16 players (of the appropriate level) are recommend for going against them.

The world boss mobs are usually massive and have an indication saying "World Boss" when you select them.

A world boss is an enemy that exists in the open world, they are not locked into any Flashpoints, Operations, or Story area. Anyone can attack him, but generally one or two players will not be able to take them down (unless they are really high level and have great gear).

They generally do not have a quest associated to them, but generally drop good pieces of equipment/weapons for any heroes strong enough to kill them.

So far I have encountered 2 such world bosses. One exists in the middle of nowhere in the Dune Sea on Tatoonine and the other is a giant robot in Shadow Town on Nar Shaddaa Co-ords (2093, 2910). Both these bosses have over 500,000 health. 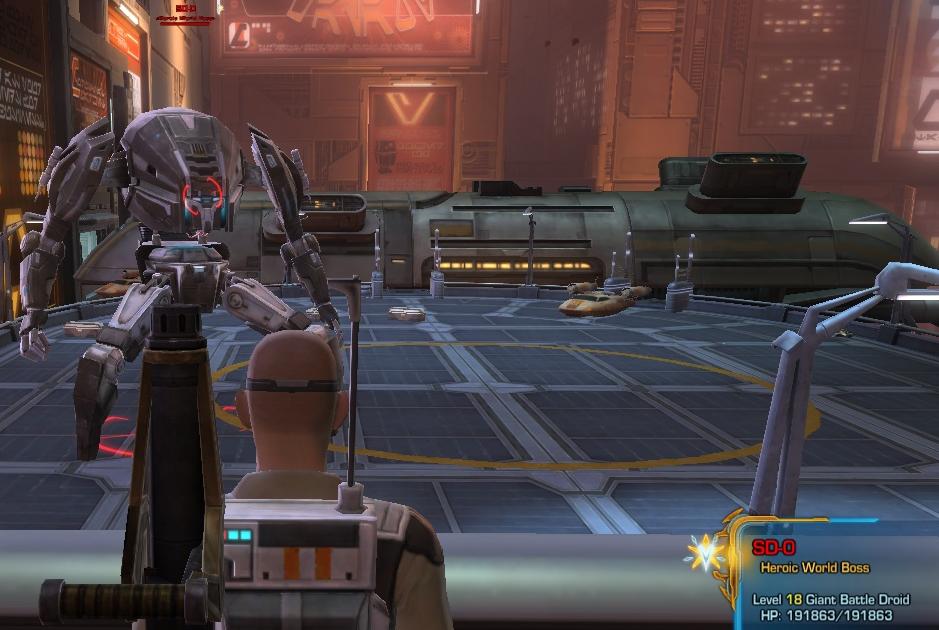 From the hitpoints (191k) and considering an attacker might do 400 damage per attack, it would take ~475 attacks to kill.

With x attackers, it would take y attacks to down (assuming no defensive specials, no additions, no boss heals).

Based on my healing characters running out of resources at ~30 actions, it seems this boss would require between 10 and 20 attackers.

Not the answer you're looking for?Browse other questions tagged star-wars-the-old-republic or ask your own question.

3
How do world bosses work?
4
Ways to earn experience-points
1
How can I get Grade 1 Lost Artifact Fragments?
8
How many quests does each companion have?
8
Can the Orochick (Wondrous Egg) be acquired? If so, how?
3
Do my companions gain abilities by themselves or do I need to train their abilities somewhere?
12
Strategies to avoid being underleveled as a F2P in SW:TOR?
1
Returning to SWTOR after a couple of years - Level 55 class quests?