How does discovering new patterns/recipes/schematics with reverse engineering work?

Is there a limit to some crafted items as to how "high" they can go? Will some not go beyond blue or purple? Can most items even go up to magenta-quality (super-epic or whatever)?

Does the chance to discover the higher quality recipes change with level or is it some fixed percentage? (I was burning my low-level materials on some enhancements and it only took me 3 items to get up to purple; lucky?)

So, the short version is, You Got Lucky.

There are two kinds of reverse engineerable items. The first kind is simple. Reverse Engineer the item, learn the pattern for a slightly better version with a higher color-grade quality, up to Artifact grade (Purple). The chance to learn the higher-quality schematic is usually 20%, you can see the chance when hovering over the item. Most crafted item customizations (Armoring, Barrels, Mods, Enhancements, Crystals, Hilts) and consumables follow this system, as do some craftable weapons (but not most). A crit on crafting one of these results in two of the item rather than one.

The other system is a bit more complicated. Most equippable items, when Reverse Engineered, have a chance to teach you a variant of the item, which is upgraded. The new recipes name will have one of three prefixes, based on the additional stat that is added to the item:

Unlike critical crafting with base items, a crit on one of these Prototype items will instead be called Advanced when they gain an augment slot.

These prototype items, like customizations, can be RE'd again, to give you a chance at an Artifact grade item. Once again, there are a number of variants - specifically, for each prefix, there are five variants that can be learned. These variant items will have new prefixes, and add two additional stats to the base item. These items will also have the suffix [Superior] unless crafted critically (i.e. with an Augment slot), at which point the suffix is changed to [Masterwork].

Overkill items can be turned into:

Critical items can be turned into:

Redoubt items are a bit of a special case. While 4 variants are known, to date, nobody seems to have been able to craft a +Defense, +Alacrity item. Whether this is a bug (people have invested a lot of time into researching this), or simply cosmic levels of bad luck is at this date unknown. That said;

Redoubt items can be turned into:

The image below provides an example of all the variants that can be crafted of one item: 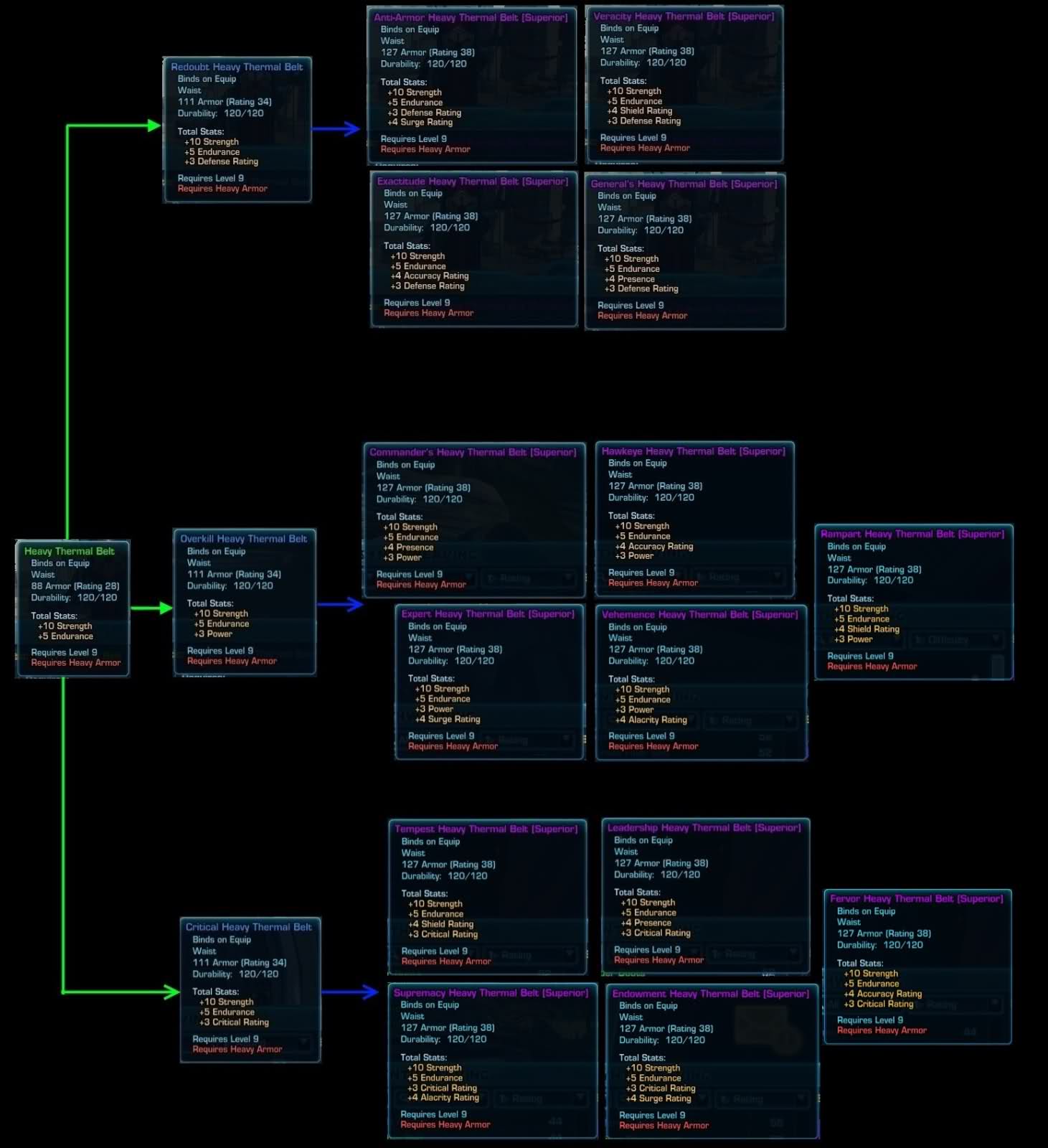 (H/T to the incredible research done by Slaign over on the official forums on this one.)

No there is no cap, it is random.

For example Skill Armoring 22 has 4 levels in order to get each level you have to reverse engineer the lower level to get the higher level.

In your situation you are lucky. My friend spend an entire day and didn't get a single upgrade on a particular gem, next morning, first one.

The second, more complicated system in LessPop_MoreFizz's answer has changed with the Shadow of Revan expansion (Patch 3.0). It still holds true for "old" schematics (skill levels 1-450), but there is a new and slightly simpler system for schematics over 450. It reduces the number of Purple/Artifact items from 14 to 9, eliminating 5 items that added both tank and DPS secondary/tertiary stats to the base item. (Note that it is still possible to add tank stats to a DPS base item and vice versa, but both types can never be added to any base item.)

Green/Premium items can be Reversed Engineered to learn Blue/Prototype items with increased Mainstat and Endurance:

Unlike the old system each of these prefixes is re-used for the highest tier, but it should not be confusing because it adds the same stats each time.

6
How does Artificing work?