How do I get a Magenta Lightsaber Crystal?

Pink Lightsabers are freaking awesome, and the +33 to [Stat] isn't bad either. However, these crystals seem to be incredibly rare - one just sold on my server for two million credits!

How do I get one?

Step One: Get the Pattern.

This step is primarily for people who have Artificing as one of their crew skills. Others will need to find someone who can do the craft on commission for them (this is exceptionally difficult and will cost you a tidy sum, for reasons that will be detailed), or get an artificing friend to help them out with this step.

In order to learn to craft a Magenta crystal, you'll first need to get an Ops group together to take down a world boss (possibly a few times since the drops are not guaranteed):

You may be best off buying the schematics from the GTN, especially the last two since they are extremely rare drops.

Most of the materials for the Magenta crystals are 'easy' to get — standard crafting components provided by the Archaeology and Treasure Hunting tradeskills, and easily availiable from the GTN if you have the credits but not the skills.

The Magenta Adegan Crystal, however, is not so simple. The first step to acquiring it is to head to Tatooine where you'll want to look for a Moisture Vaporator. These are big metal tower lookin' things. There are many in the Jundland region, marked on the map below: 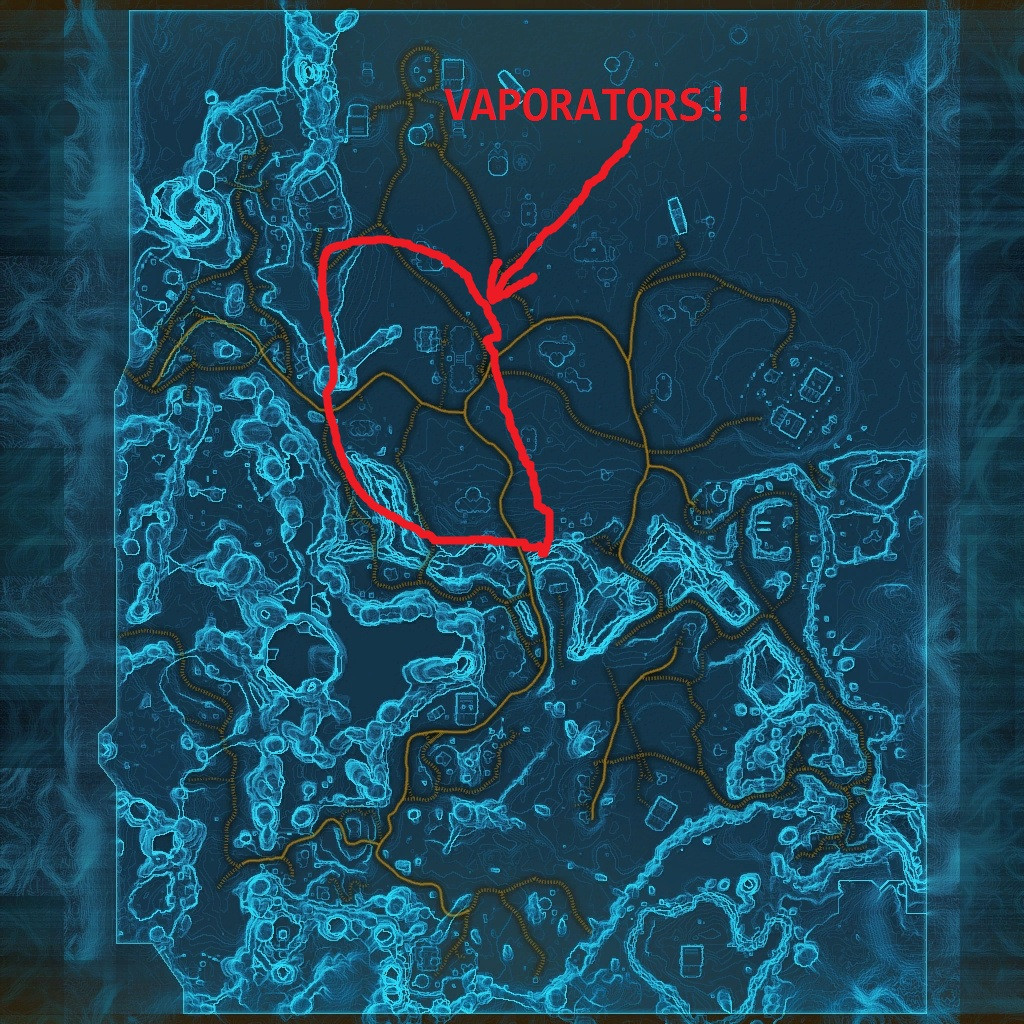 At the base of some of these towers, you'll find a clickable Water Access Panel. Clicking on this will give you the buff Refreshed and Sustained.

Note: Not all Vaporators have a clickable panel. If you can't find one, keep looking. There are clickable panels all over Tatooine, but in the experience of my guildmates, Jundland was the most dense.

Now that you've gotten water from Tattooine, it's time to go freeze it on Hoth.

Specifically, you'll want to head to the Highmount Ridge region, just north of the Imperial base at Leth Outpost. I've marked it below: 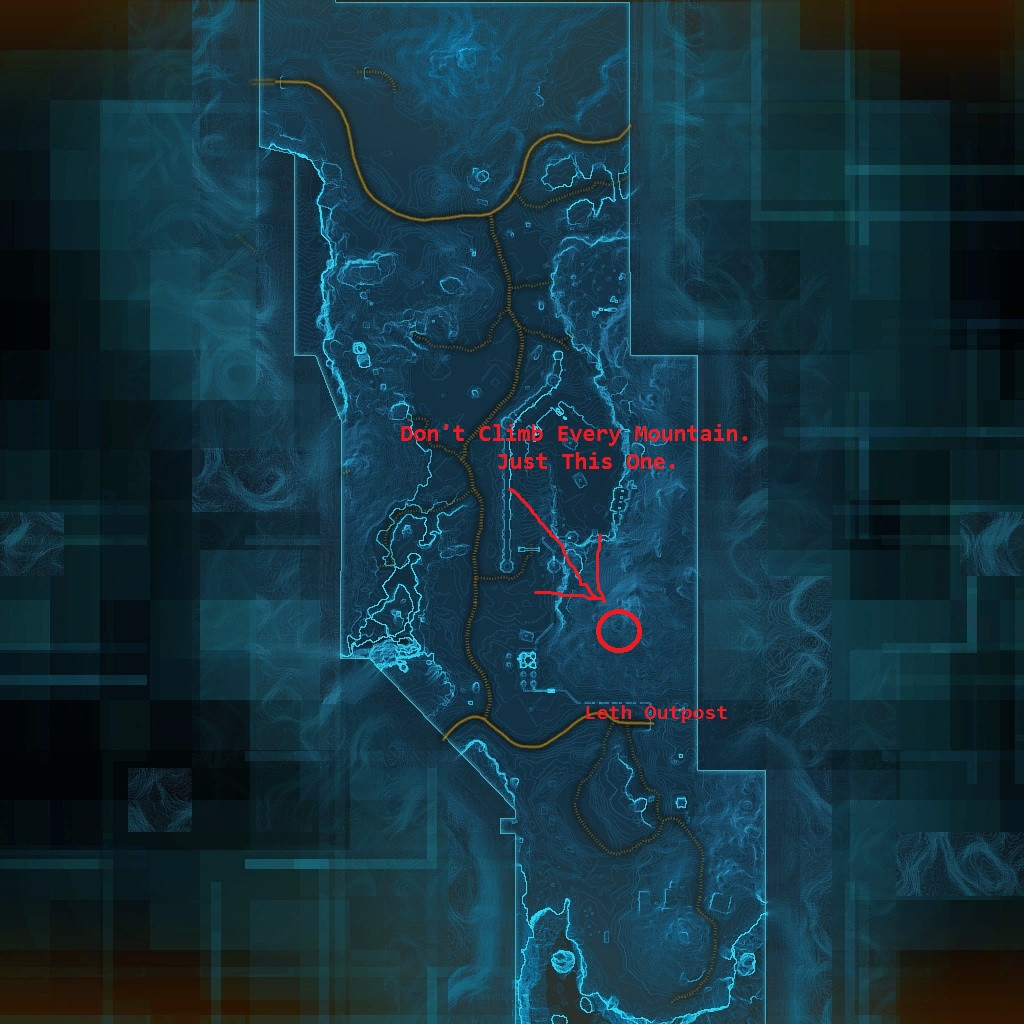 What you want to do here is climb the mountain. Once you've reached a certain height, your water buff from Tattooine will be removed, and replaced with a new one — Extreme Altitude.

Step Four: Who You Gonna Call?

Now that you've got your Ice, it's time to kill a ghost.

From Hoth, we head to Ilum, where you'll want to visit the Eastern Ice Shelf, located to the west of the Imperial and Republic Waystations. Again, you can see the map below, along with both waystations marked for convenience: 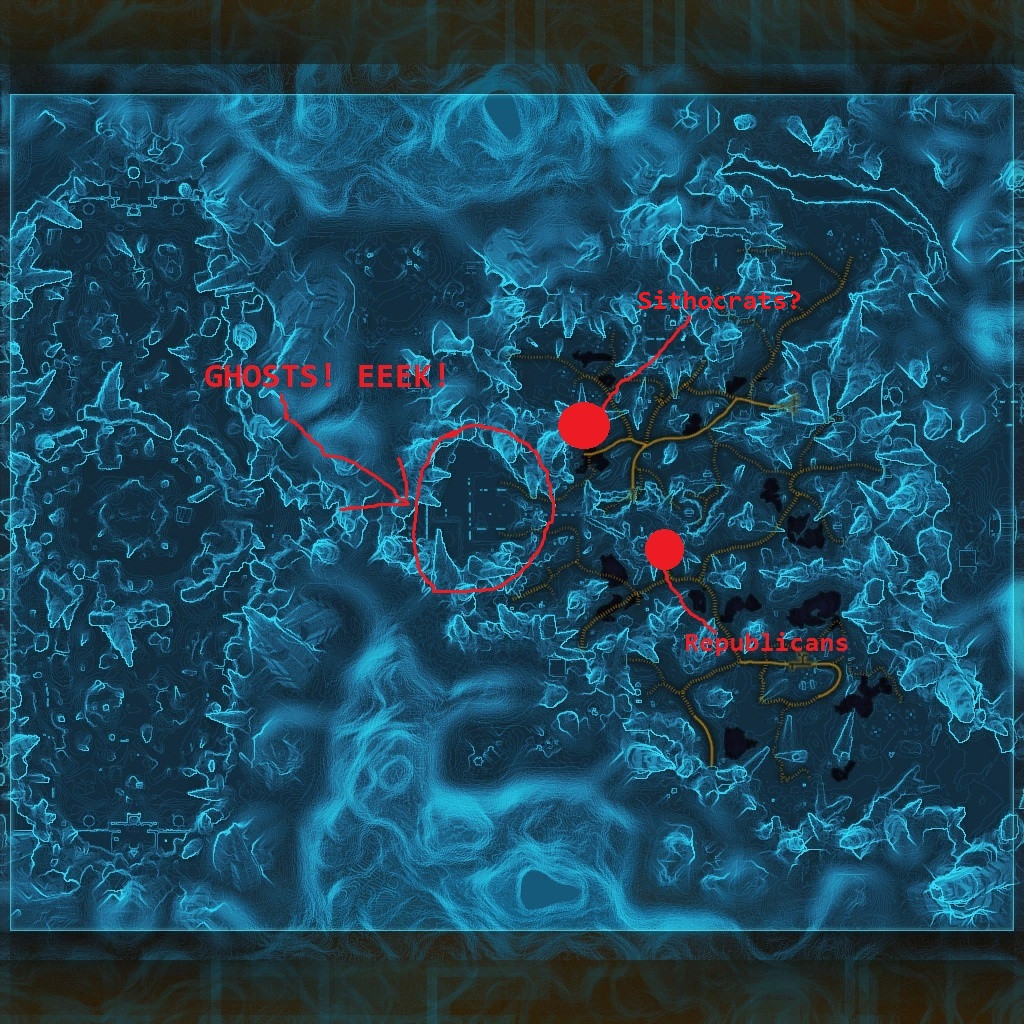 At the Ice Shelf, what you're looking for is a Depleted White Adegan Crystal. It looks like a typical crystal gathering node, and when you click on it will summon a Force Ghost. This is a level 50 boss mob, with about 200k HP — and it hits fairly hard. You'll probably need a full group including both a tank and healer. If you can handle level 50 Flashpoints, you should be able to handle this ghost. Once he's defeated, anyone in your group with the Pure Shockfrozen Water in their inventory should be able to click on the corpse to turn it into a Magenta Adegan Crystal.

That's enough for the +33 stat crystals. The +16 crystals added in Patch 1.2 use Pristine Adegan Crystals instead, and the +41 crystal require both. See Where and what are the "unusual crystal formations" on Alderaan? for how to get the Pristine crystals (it's less involved!).

Now it's just a matter of crafting the crystal! There's one notable catch here though — that Magenta Adegan Crystal you just went to all that trouble to produce? It's unique. So the person crafting your new Fabulous Pink Saber Crystal can only be working on one job at a time — he can't set a few and log off overnight. And being a high level epic craft skill, it takes a fairly long time to craft each one. So make sure that you either trust your crafter completely, or are able to craft it yourself. Thankfully, a crafter can have a dozen of the base crystals sitting in his mailbox waiting to craft, so setting up a queue is possible. But given the inconvenience involved for the crafter, I'd strongly advise that you compensate them well.

Or you could skip everything and buy one off the GTN....

This guide seems to provide a fairly straightforward walkthrough (if a total pain to actually do).

10
What colors of lightsaber crystals are there (and where can I get them)?
12
Where and what are the "unusual crystal formations" on Alderaan?
6
How does Artificing work?

10
How do you get a ship?
8
I've got Supplies. Now what?
2
Can the green/black color crystal from Razer be used with all my characters?
10
What colors of lightsaber crystals are there (and where can I get them)?
3
What is the best use of Warzone Commendations (for PVP purposes) after reaching Battlemaster (Valor Rank 60)?
3
What are the stats of the Razer green/black color crystal?
12
Where and what are the "unusual crystal formations" on Alderaan?
3
How do you get HK-51?
2
Invisible enemy NPCs in SWTOR?