What is the range for the intercept fighter mission?

In a recent game, I was trying to do amphibious invasions against a couple tiny-island cities the AI controlled. These two cities were spaced nicely between me and the long, skinny continent that the AI's main cities were located upon, although I could have bypassed them by going a long way around. The fact that they were located in such a defensive position made me attempt to take them rather than trying to form a beachhead and invade at a different location. In retrospect I should have attempted to buy out a nearby CS, land there, and then launch a navy-supported invasion across the land instead. That way I could have had multiple AA guns to defend the rest of the army. I should also note that I was using Thal's Vanilla Enhanced mod which makes the small islands more useful than automatic razes, but it also doesn't affect air missions as far as I know.

I did also forget that carriers could have escorted my fighters much closer to the invading infantry units.

I had one of the cities bombed down to 1 HP with battleships and destroyers, but I could never get an appropriate land unit close enough to capture it. Even when I had my fighters on the intercept mission and a few squares away from the embarked land unit, every turn that I had an embarked unit a turn from capturing, I'd get a message saying I was bombarded and destroyed by an enemy fighter. What radius does the intercept mission protect? Just the city itself?

Is there any other way to protect embarked land units for an invasion other than send like 6 units all at once and hoping a couple survive to take the city?

I believe that all ground units that are air-intercept capable can protect in a radius 2 hexes around them. According to research done by Oak, air units can intercept anywhere in their attack range. A single ground or air anti-air unit can only intercept once per turn. Interception does not guarantee destruction, and it's possible that your unit will still be injured or destroyed even if the intercept is successful.

My strategy when assaulting a naval stronghold such as this is to bring overwhelming force, and plan to lose a few units. (This strategy would certainly be historically accurate...)

If air units are an issue, are you bringing in adequate ground-to-air (and/or sea-to-air) defenses? Carriers can store fighters that can intercept enemy fighters attacking your land and naval units.

I would suggest setting up some carriers and other ships to protect your embarked land units from enemy air and sea units while they get into position. It's not 100% clear from your question, but you are aware that you can attack the city while embarked, yes? Otherwise you've got another turn delay where your unit is vulnerable when you disembark.

As I suggested in the comments, I'd also consider choosing a different tactic or priority target if you can. Small 1 or 2 hex island cities aren't generally high value targets, and their production pales in comparison to a city near forests and hills. Plus, they're hard to assault (as you've noticed) and if the map isn't all islands, fighting the brunt of their forces in a sea/air engagement by building a bunch of ships you don't have a use for once you capture the islands might not be the best use of your military resources.

If you can bypass these islands, you might be better off capturing some of their higher value cities inland, thereby crippling their war machine. Who knows, they may even offer you the islands when they beg for peace... :)

Air interception is based on the range of the fighter. If you promote the unit with range (+2). You are increasing the range at which the fighter will intercept other fighters. Interception range is at the hex the enemy is attacking, not the flight path taken.

As Oak says in the comments below... "interception doesn't stop the plane from attacking, it only damages it while it attacks. So your embarked units could have still died even if their attackers were intercepted."

I wish to add to that.,I have observed less damage on the target when my fighter is intercepted by another fighter or by other defences that is not the target, e.g. Destroyer. Untested, you could assume from that statement that a pack of destroyers (DS) is better than one because any one DS would have reduced damage as it is being defended by other the DS.

Scenario 1.A - Fighter on carrier is in range to defend the destroyer. 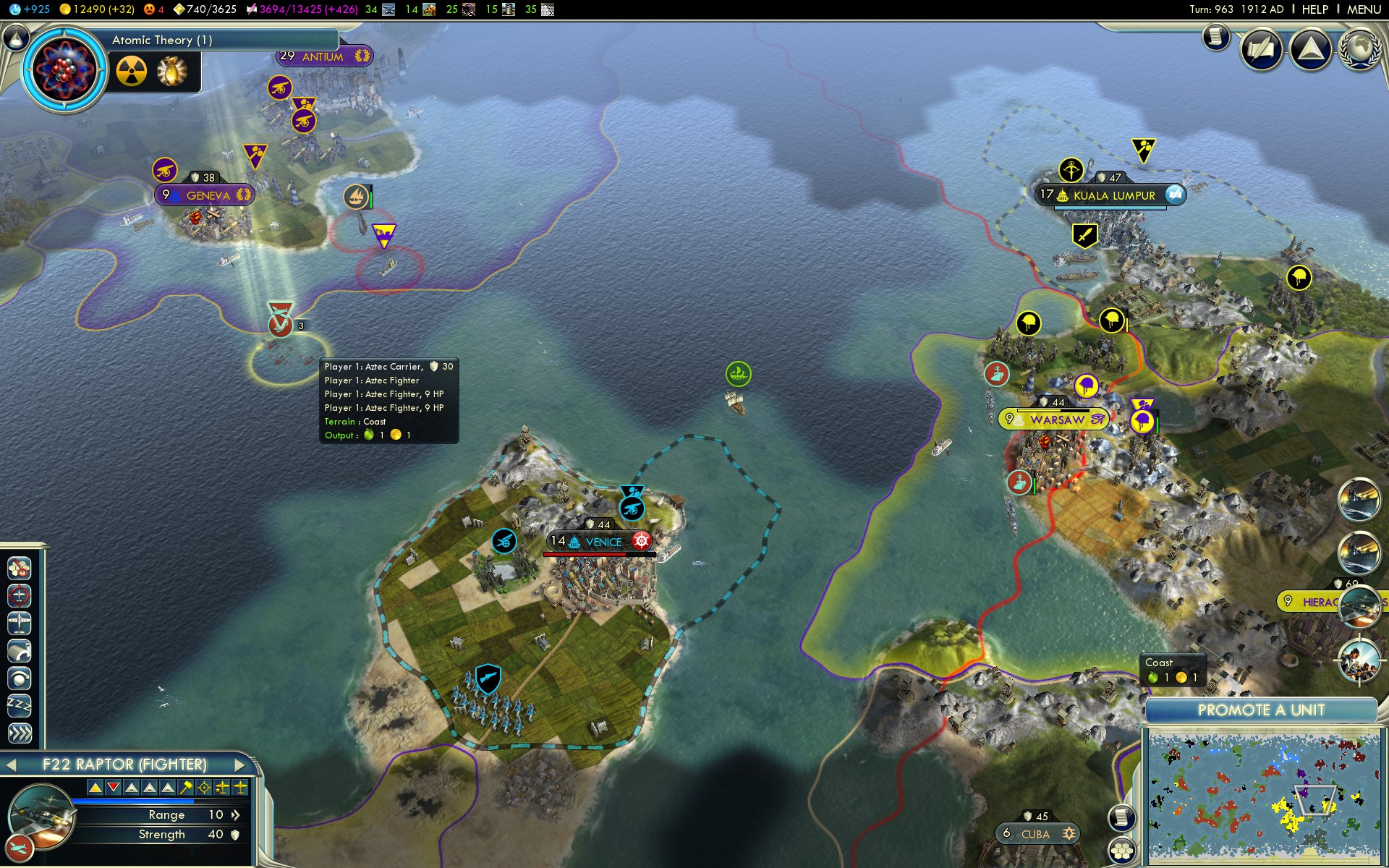 Scenario 1.B - My fighter (yellow circle) is defending my destroyer from enemy fighter (red circle). 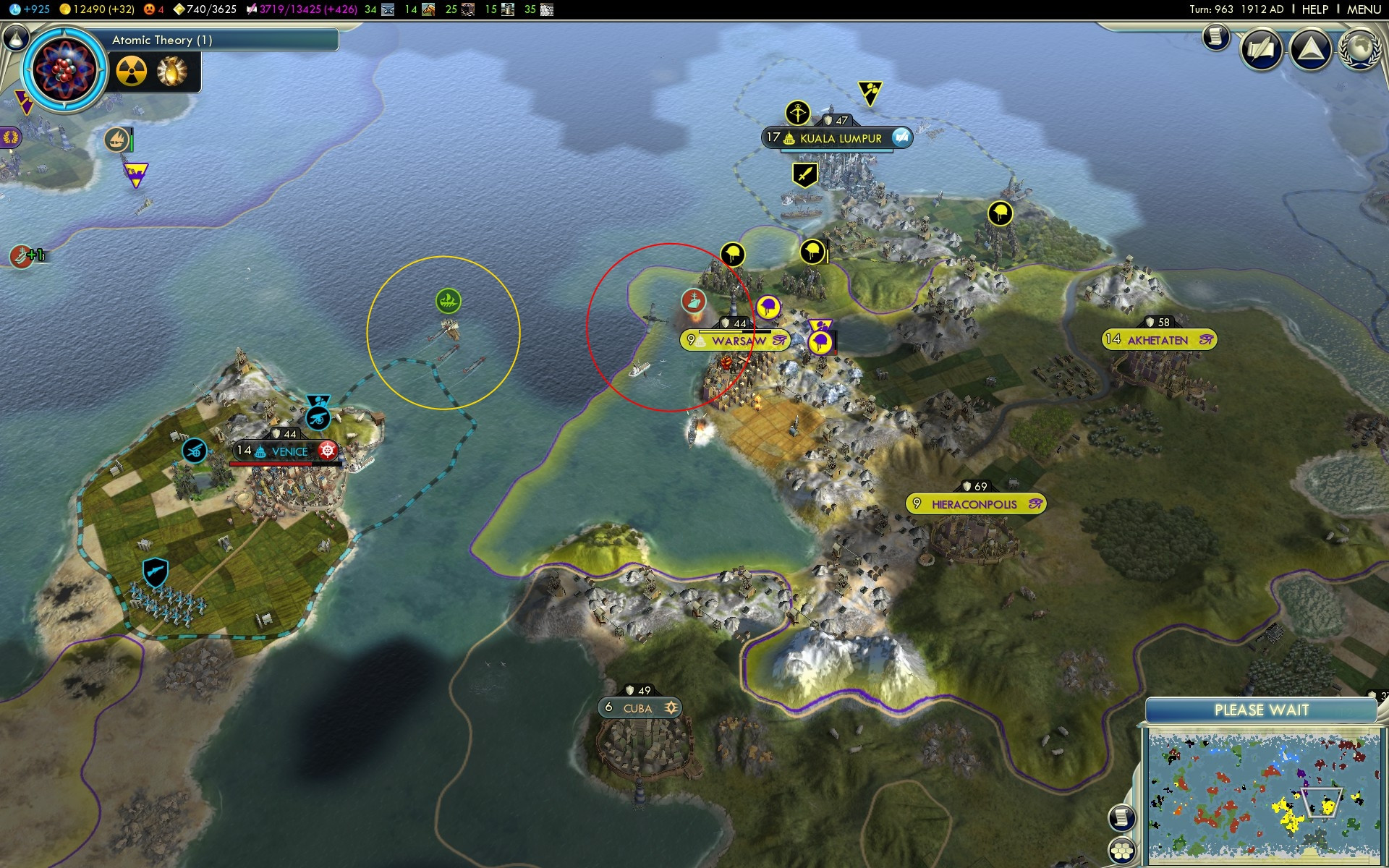 Scenario 2.A - I loaded the game and moved my carrier so the fighter was now out of range to defend my destroyer. 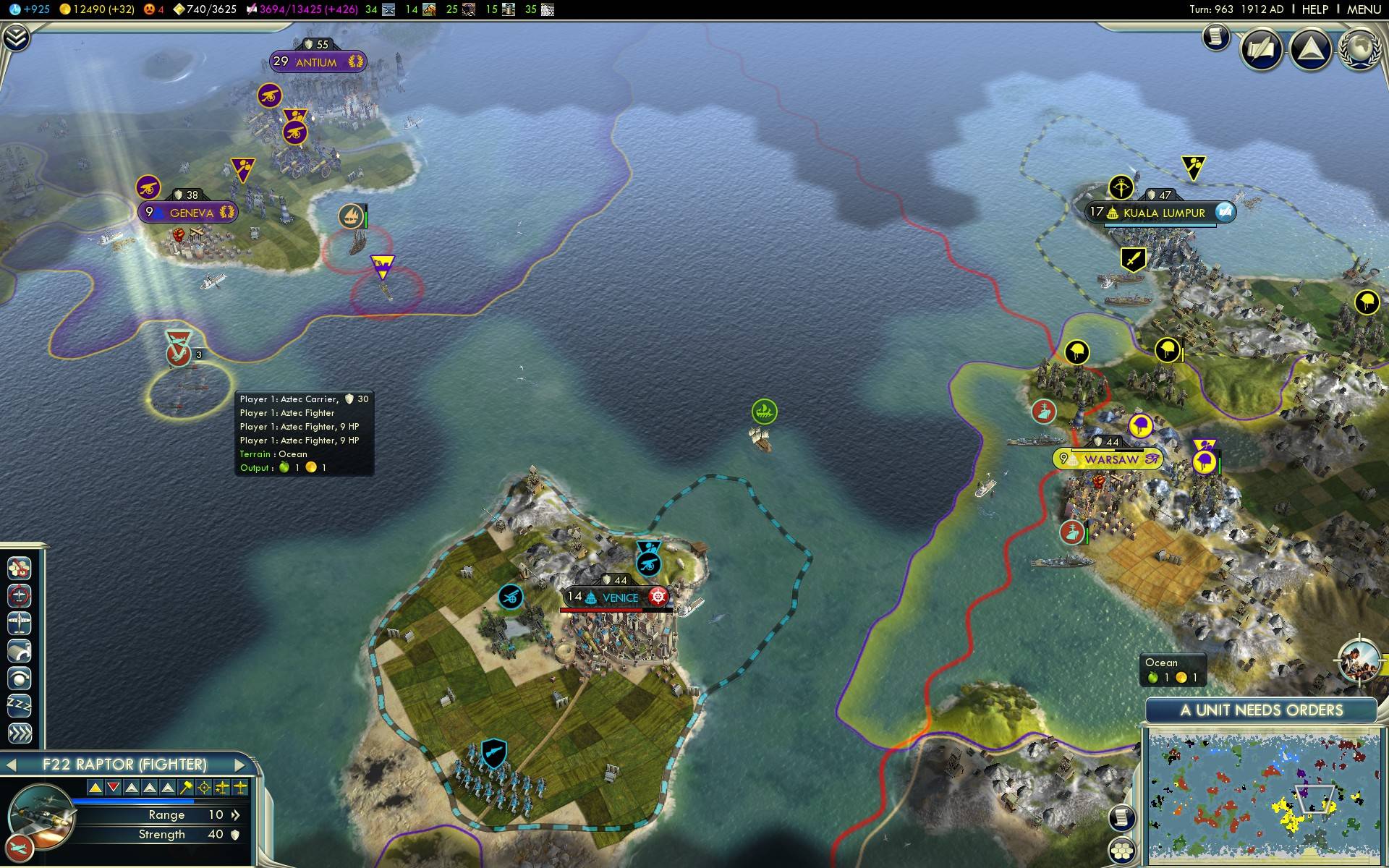 Scenario 2.B - The enemy fighter (red circle) attacks my destroyer. My defensive fighters remain on the carrier eating ice cream. 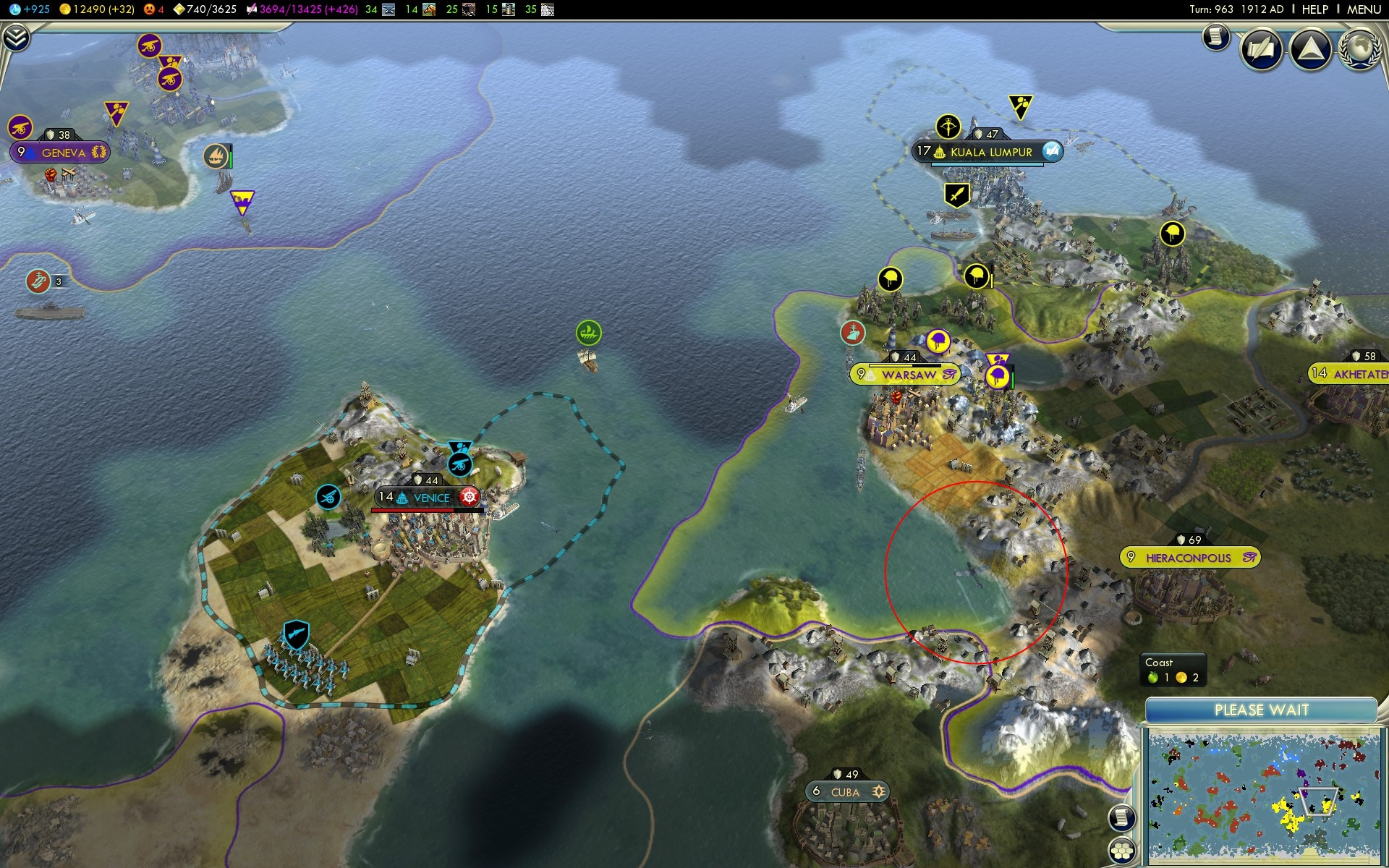 The air unit intercept order range is equal to their attack range.

The intercept range of naval and ground units is 2. The automatically attempt to intercept if and only if they have movement left.

Intercept is a single preemptive strike against an attacking air unit. The attacker must be targeting a friendly unit or city in range (including the interceptor itself for land and naval interceptors).

If you do not deal enough damage to destroy the attacker in the intercept, combat will continue to resolve normally the targeted friendly unit, damaging both defender and attacker, potentially killing either.

Each intercepting unit can only intercept once per turn (before promotions), and only one interceptor will strike each attacker (even if multiple interceptors are in range). This means you can get use out of one defending interceptor per air attack, but extra are wasted.

Because a kill on preemptive strike can prevent all damage to the defending unit (including very weak units like those embarked), or at least cause the attacker to die in normal combat, powerful and reliable interceptors are very useful. Building or upgrading to late tech interceptors and choosing the interception promotion on air interceptors can help secure more intercept kills.

When conquering island cities with many defending air units, carriers loaded with a mix of air interceptors and bombardment specialists with a naval interceptor escort can be very effective. The naval interceptor provides free intercept capability, enemy submarine spotting, and naval melee unit for coastal city capturing. The fighters can intercept early air attacks, transitioning into air sweep, and finally bombardment when defending air units have been eliminated. The "Sortie" promotion for air interceptors allows you to get an additional intercept out of the same unit, giving you the opportunity to dedicate more units to air sweeps and bombardment.

Comparing this composition to a ranged naval unit plus embarked melee land unit army composition, there are obvious advantages in raw defensive combat strength, intercept ability, and submarine defense. But also carriers allow you to create tighter formations, getting more utility out of the limited intercept and submarine spotting range of your naval interceptor. Where ranged units have to spread into a ring around targets to focus fire, carrier groups can stay clustered while attacking.

Additionally, air units heal while their carrier moves, giving you a pseudo "March" promotion to your air units. Each individual air unit on a carrier can also attack before, after, or even between movements of the carrier, giving a pseudo "Blitz" promotion. Whereas ranged naval units would be spread out after attacking multiple widely spaced targets, your carrier group can continue to stay clustered. This helps your naval units from being picked off one by one by roving groups of enemy naval units, as well as keeping you in formation for city bombardment immediately after engaging targets of opportunity while traveling.

4
What should be my objectives when going to war with another civ?
23
How to militarily delay a science victory?
8
What is the best way to detect covered/hidden units in an enemy city?
8
Defence against stealth bombers?
3
Is it possible to (globally) slow down the pace of research and culture gain, without slowing production (as much)?
3
Can a civilian unit pass through border
4
Can I “garrison” aircraft?
2
What are the mechanics behind tile acquisition?
2
How is the “Soldiers” demographic in Civ 5 calculated?