While playing solitaire in the Google Chrome browser, I do get only about 50% of the games finished. I never thought much of it, I just lost and took a new game. But I just finished a game except for two hidden cards. It could not be solved, but it appeared that some cards were missing! 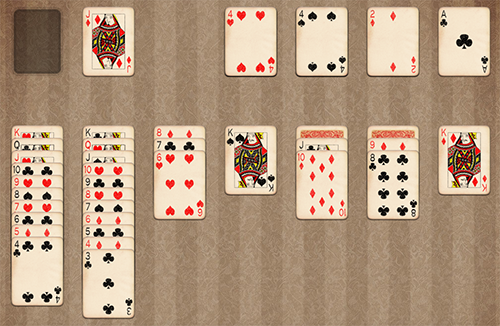 It is a Klondike single deal game. The card in the deck is just the jack of diamonds, that's the only card I got left. There are two hidden cards, but I can see 10 cards missing:

I've noticed mainly graphical glitches in the game when undoing previous moves, but I didn't use that feature here.

How come these are missing? It feels like I make a stupid thought mistake, but I can't spot it. Where are my missing cards?

To just put an answer here, assuming that the jack on the waste is indeed the last card in the stock, it's a bug.

Klondike Solitaire is played with one full deck of cards consisting of 52 cards, A to K of 4 suits. In that screenshot above, you have 11 cards on the Foundations, 1 card in the Waste, and 32 cards on the tableau, which totals to 44 cards.

Not the answer you're looking for? Browse other questions tagged google-chrome or ask your own question.