What's the least skill levels that will result in character level 81?

Both of my level 81 characters got to where they are with power-leveling via Oghma Infinium. As such, I really didn't stop much to notice the smaller steps in level progression along the way.

What I have noticed now however is that, with all skills leveled to 100, my character level appears to be exactly 81.5 - that is, the character is level 81 and half of the character xp bar is full.

So, I'm interested to know what is the lowest set of skill levels that will add up to a character level at or just barely above 81.0?

What's that, you want an explanation?

The formula to level up is:

Also, you can test it out with an online character creator, like this half-baked one I threw together.

Edit 2:
In case anyone's confused about why I'm ignoring major/minor skills or anything else that might have affected a character in Morrowind/Oblivion, there's a great answer on this topic. All skills are born equal. Leveling a major skill Sneak from 30 to 31 is the same as leveling a standard skill Sneak from 30 to 31, which is the same as leveling a minor skill Archery from 30 to 31. All of them give you 31 points of "skill level XP" or whatever we want to call it. The bottom line is that these mechanics are understood and the above answer should be true for all races and all skills.

I went ahead and crunched the numbers in Excel myself, to see if my own methods would yield the same answer as Bryan. Initially, I was surprised to find it didn't, but near the end of documenting my work here I seem to have stumbled across my error in process. Still I hate to waste a good write-up, so here's my alternative method:

TL;DR: This is how I used Excel to come to the same conclusions Bryan drew with just some basic high school algebra.

To reach Character Level 81 by these calculations, you need 17 level 100 skills and 1 level 89 skill. This requires traversing a total of 1,484 skill levels.

Instead of going with the more complicated maths I've forgotten since high school, I decided to go with very basic addition, subtraction, multiplication, and division, and let Excel do most of the leg work. Unfortunately, that means I had to generate a lot of cells I won't be showing here. I will post a sample though, so you can see this part at work. 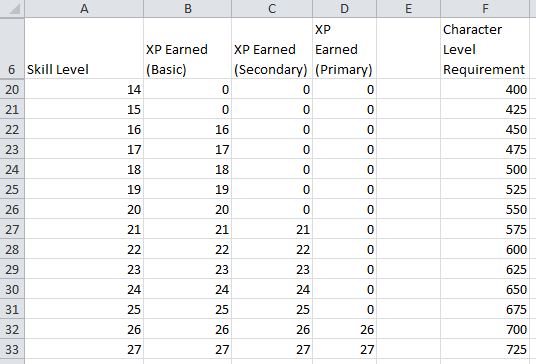 The column headers are on row 6 because I ended up putting other calculations in the rows above, so all of the important numbers would be easily reachable nearby. I'll be showing some of the cells in the hidden rows later.

In column A, under the header Skill Level, I created a series of cells to mark levels 1-100. As you can see, I ended up using these for both Skill and Character level markers.

Column B is the Character XP that is earned for leveling up a Basic skill to the given level. What I'm calling "Basic" here are the skills for which the character receives no racial bonus. Levels 1-15 are set at zero, because these skills are given to the player on character creation, resulting in no XP earned.

Column C is the same as B, but for Secondary skills. Secondary skills are those which the player receives a +5 racial bonus, so they don't start giving XP until level 21.

Column D is the same as B & C, but for the Primary skill. This is the skill for which a player receives a +10 bonus, and does not begin earning XP until level 26.

In Columns B-C, all of the zeroes are manually entered. The non-zero cells are set to be equal to the cell in the same row, on Column A.

The Character Level Requirement column lists the XP required to progress from the previous level to the level for that row. This is according to the formula given in UESP:

All that being done, I now wanted to figure out how much total Character XP was needed to progress through levels 2-81. This was simply done by SUM(F7:F87), and turned up the same result Bryan had: 87,000.

Next, to quickly determine how I could reach that goal, I wanted to know how much XP would be earned by leveling each type (Basic, Secondary, Primary) of skill to level 100, and how much would be earned in total for each skill group. For reference, I also wanted to know (you'll see I did this the hard way, as there is an easier solution with simple subtraction) how many levels the character would actually traverse when maxing those skills.

Row 1 is the total XP earned by leveling one of each class of skill to 100. The columns line up with the columns in the other part of the spreadsheet: B is Basic, C is Secondary, D is Primary. The formula for B1 is =SUM(B7:B106), and is copied over to the other cells in the row.

Row 2 is the total XP earned by leveling all skills of each class to 100. There are 12 Basic skills, 5 Secondary, and 1 Primary. The formulas are a simple multiplication of the cell above, by the number of skills in that class. B2=B1*12 C2=C1*5 D2=D1

Row 5 is really more for my amusement than anything, I guess. In the end, it makes little difference. It is just the amount of total XP from maxing one skill, divided by the number of levels traversed to accomplish the task. (B5=B1/B3 and so on)

All this is great and all, but how do we figure out how to get to Character Level 81? Since the Primary and Secondary skills seemed to have the highest relative value, I decided to start there. The following sheet portion might seem like a bit of organized chaos, but I hope I can explain it clearly. All formula references to cells not displayed below point to cells shown or described above.

H2 is the total of all the XP gained by leveling all of the player's Primary and Secondary skills. (H2=D2+C2) I2 is the amount of XP still required to hit Character Level 81 after all Primary and Secondary skills are at level 100. (I2=F2-H2) Now, I needed to get a quick idea of how many Basic levels would be needed to meet that remainder. (J2=I2/B1) So, that's all of 11 Basic levels plus most of the last one.

So, with all except one skill leveled up to 100, we still have 3,845 XP left to go. I couldn't think of a simple way to have Excel automagically give me the number of levels I needed, so I went to a slightly more manual approach. I clicked on B7 (the first cell in the column representing XP earned per Basic level), and dragged my selection down the column until the Sum in the status bar exceeded 3,845. This occurred at level 89, with a total of 3,885.

Thanks to Bryan for the great lesson learned here: Remembering your High School algebra can save you a lot of Excel headache.

I don't know if there are any "gotcha!"s or whatnot to this methodology, but from what you just described, would it not be that you have to max every skill with exception of bing able to have 5 missing skill points anywhere you like?

If I understand the glitch correctly, you essentially level up the standard way, just getting the skill points en masse from the book repeatedly.

24
How many skill points does it take to level up?

18
How do spells affect skill leveling?
10
Alvor keeps trying to kill me, can't advance the story
21
Do followers have skill levels and level similar to my characters?
10
Will wearing skill fortifying items to boost my skill above 100 stop that skill from levelling up?
19
What's the quickest & cheapest way to power-level up to 15?
25
How to make Skyrim more challenging at higher character levels?
2
How to level up armor skills in legendary difficulty?
7
Light armor for more independent adventuring?