I have a lot of songs in my Rock Band 3 library -- thousands of them.

Sometimes I'd just like to listen to the tracks in the library, particularly because these are original multi-track studio masters, free of CD mastering artifacts and artificial "loudness", e.g.

This almost gets me a jukebox mode for listening to the music (and watching the animated characters play in on the monitor if I like), but it gets stuck at the song completion / results screen, where I have to press a controller button to advance.

Is there any way to bypass this limitation or otherwise have a true jukebox mode that continuously plays random tracks from my Rock Band song library?

One solution I've seen -- and it is very, very ghetto -- is to get an auto-turbo controller and enable "turbo fire" on the A button (for example, on XBox, or whatever the equivalent is on PS3).

This effectively causes the game to advance past the song results screen to the next song.

Not pretty, and I don't really want to buy a whole controller for this, but it might be the only thing that works.

I finally got around to buying a turbo controller to see if this works. I chose the Horipad EX2 Turbo. $25.72 at the time of writing from Amazon, and wired only, but that doesn't matter too much -- and is arguably better for this use case, since who wants to replace batteries on a controller that's turbo-ing and constantly mashing buttons all the time? 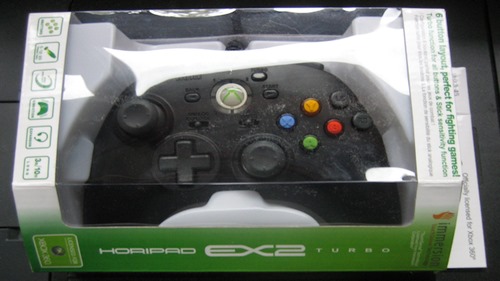 To get it to work:

The green turbo LED flashes constantly when you do this, I guess to indicate that it's mashing the A button every time that LED flashes. But.. it works! I can do "party shuffle" and it moves from song to song with no effort on my part. Awesome!

Not the answer you're looking for? Browse other questions tagged rock-band-3 or ask your own question.