All the contents of my shelter exploded, killing me and leaving my shelter virtually unscathed. How could this happen?

I finally gave in to my curiosity this weekend and bought Minecraft 1.1. I had largely avoided learning too much about it because I wanted to play through it myself and discover things without the help of guides and FAQs. However, I had a very disturbing situation happen last night. I am reluctant to look through any FAQs to hunt down an explanation because I may come across too many spoilers, so if someone could give me a direct explanation without much spoilerage I'd appreciate it.

To start, here was what the main part of my shelter looked like: 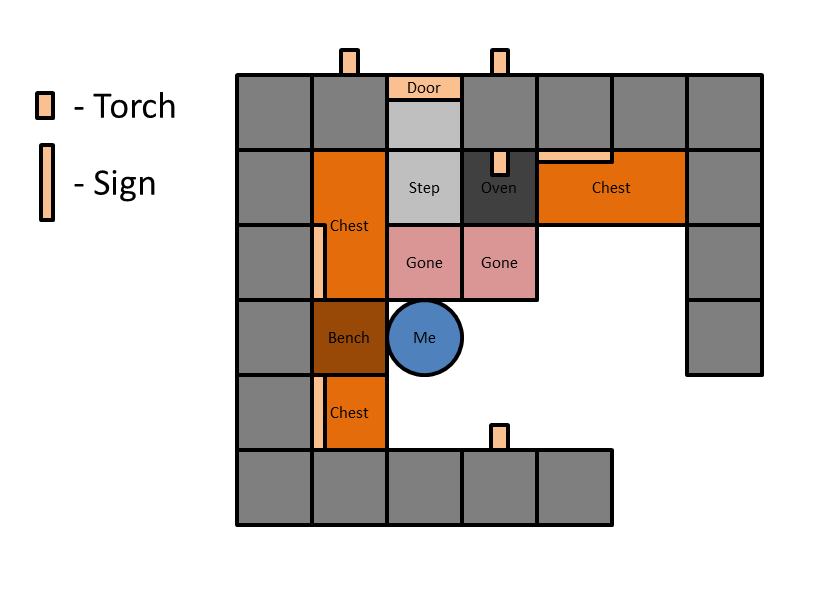 The shelter was constructed of native (i.e. un-mined) stone and cobblestone. I had one 1-block chest and two 2-block chests with signs above them, a furnace/oven, a crafting bench, a couple torches, and a step up to a doorway leading outside. The top right chest contained various stone and iron material, along with coal, flint, charcoal, and gunpowder. The top left chest contained wood and glass material. The smaller bottom left chest contained tools, armor, and assorted bits. Not sure if it matters, but the floor of my shelter was actually the ceiling of an overhanging cliff that was around 40 blocks high off the ground.

I had just finished remodeling my shelter, having just filled my new chests and placed the signs above them to help me remember what I put in them. I was in the process of crafting some new iron objects at my bench when BLAM!!! There was an explosion, my screen went red, and my precious treasures went flying. Unfortunately, I didn't have my sound on (since my wife was sleeping on the couch) and don't know if there was any noise going on beforehand to warn me of the impending disaster.

Luckily, my respawn point was close, and I managed to frantically make my way back. To my surprise, it appeared that nearly all my objects were still there. Most were sitting in the same spot that their chest was in. As best I can tell, I was able to recover nearly everything, with the exception of the signs and 2 of the 5 chest blocks. Oddly, the door and torches outside were gone, but the structure itself was untouched save for two holes in the floor (marked "Gone" in the above picture).

I'm baffled by what could have happened. I can't imagine a creeper snuck up on me, since at the time there was no way in (I took away the bricks leading up to the door). I've tangled with them before and their explosions have never outright killed me, just wounded me. They also tend to leave big craters, and there seemed to be too little structural damage in this case.

The only explanation I can come up with is that I organized my possessions badly. Should furnaces not be placed next to chests containing combustibles? Should certain materials not be stored together in the same chest, like flint and gunpowder?

As Ben Blank said, the only thing that will spontaneously cause an explosion, if you haven't made any TNT, is a creeper that got into your house. I see three possible directions for the creeper to enter from:

To my surprise, it appeared that nearly all my objects were still there. Most were sitting in the same spot that their chest was in. As best I can tell, I was able to recover nearly everything, with the exception of the signs and 2 of the 5 chest blocks.

Chests drop their contents when destroyed, as you saw. If there had been two explosions, then the second one would have destroyed all of your resources, as they have almost no “health”.

They also tend to leave big craters, and there seemed to be too little structural damage in this case.

The size of an explosion crater depends on the strength of the materials. If you meet a creeper outside, then it will leave a large hole in the dirt, but the same explosion will do much less damage to stone.

Oddly, the door and torches outside were gone, but the structure itself was untouched save for two holes in the floor (marked "Gone" in the above picture).

Wooden objects are generally weaker against explosions, and torches have no blast resistance at all.

Assuming no mods are involved, only a limited number of things in the game can cause explosions:

So unless you had both explosives and an ignition source in your base (furnaces and items in chests don't count) which aren't on your map, that only leaves a creeper (which is absolutely capable of killing an unarmored Steve at point-blank range).

I notice a hole in the lower-right corner of your map. Is it at all possible a creeper could have entered your base through it?

Furniture being placed and chest contents can not cause explosions. However, everyone is convinced it's a creeper. But I need just a little more info so I can also be sure it was a creeper. What I need answered is this: were you on singleplayer or multiplayer? If you were on multiplayer, another player could have placed TNT or made a trap with TNT and a cleverly hidden pressure plate. It also could have been both a creeper and another player. Maybe the ccreeper didn't spawn naturally in your tunnels and the player used a spawn egg. The player could then have opened the path to your house and let the creeper in and quickly closed the path. Or the creeper may have spawned naturally on your roof and the player made a hole and lured the creeper in. If you were on multiplayer, there are many possibilites, and if you weren't, it was the creeper. Unless somebody just hacked your account and placed a TNT trap or a creeper. There are many possibilites. Please get back to me as soon as you can, and tell me if you ever gave away any of your account information.

15
How can I keep ghosts out of my machine?
3
How did my objects disappear?

1
How to destroy a chest using redstone in minecraft?
29
Help! I got lost in Nether!
3
How did my objects disappear?
4
Why did all of my items disappear?
2
How to automatically pump oil over long distances using ender chests?
1
No Mobs Spawning in Mob Grinder
8
The case of the dead sheep
1
Minecraft 1.12.2: Add all items from that already exist in the chest
3
Why doesn't my mob grinder work?