What are the differences between the two game modes in Pandemic 2?

When you start a new game, you can either play it casually or realistic 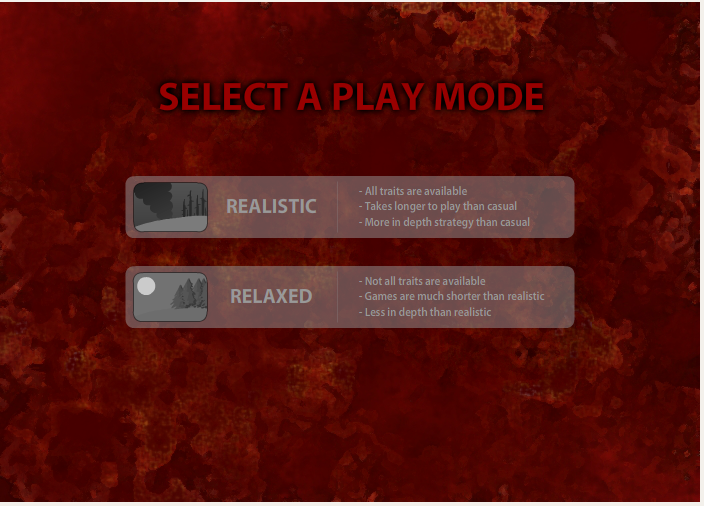 What are the differences between these two game modes? What does it mean that not all traits are available in relaxed mode? Why are games much shorter?

Traits are in the bottom right hand corner of the "Disease" menu, and they are either given when you start (either based on the first country you randomly infect, or the type of disease) or they're given as the game progresses, I believe for having certain combinations of other disease attributes or other random events. For instance, for starting in North Africa, you'll get the "Durable" trait, which gives you level 1 heat resistance to start with. You can also get "Durable" for starting in other environments, and it will give you an appropriate level 1 resistance depending on where you start.

I'm not sure how you obtain all of the traits, given that the game is so random. I tried forcing one in particular - "Bloody Vomit" - by taking a couple of attributes that seemed to combine to make that particular trait viable, (Hemorrhaging and Vomiting) but it wasn't given to me. "Durable" seems fairly common, "Cured" is the result of a successful vaccine, and "Immunity" for a failed vaccine, but the others I'm not sure about.

The easy answer for the difference between "Casual" and "Realistic" is that I think in casual more of the "random dice rolls" go your way - ie, countries get infected faster, and react slower. In testing the first 10 days of several attempts at both casual and realistic, I found that I had about 20% more evolution points on average when I played Casual, even if I managed to infect more people with my default randomized starting attributes on Realistic. This would seem to indicate that you'll have to be more strategic with your points in Realistic, since you'll probably end up with fewer overall.

There's also a guide for the game which goes into detail about the available traits and the differences between the modes. One thing they point out is that you can't save in Casual mode, but you can in Realistic. This is supposedly because Casual games are intended to be shorter. Personally, I found that both games took about the same time to play to competition, but I may just be gung-ho about being infectious.

2
What does it take to unlock the Deceiver trait?