I have this pseudo-functional (but mostly for aesthetics) balcony just outside my mountain-side shelter: 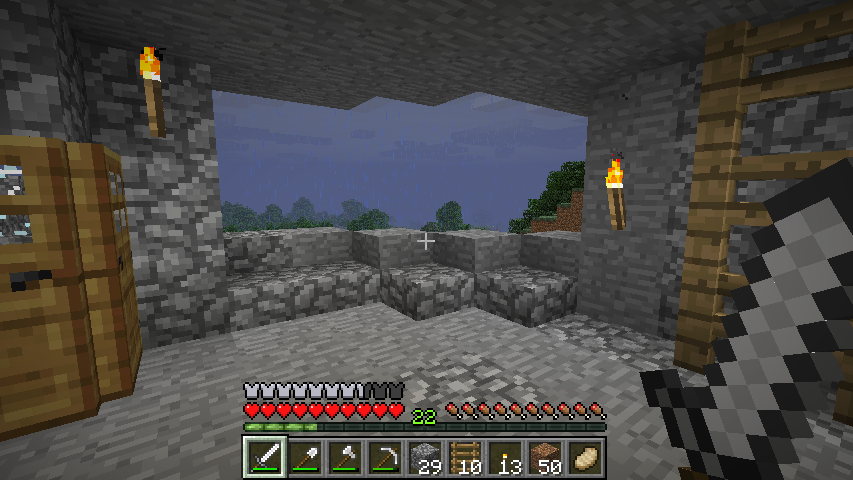 It gives me a nice view outside, and I can peer over the edge to the ground far below (30+ blocks) to see what baddies are down there before I venture out.

There is an above overhang that extends a couple of blocks past the balcony edge (not shown), so no monsters can fall down onto it from above. What I'm not sure about is whether it's Endermen-proof. I've noticed them appearing on occassion on the mountain to the right. I've also tussled with a few of them underground and know they have a penchant for teleporting behind you when they get cross. However, in my experience they seem to have trouble moving/teleporting through passages that narrow in height to less than 3 blocks. The narrowest height of my balcony opening is 2 1/2 blocks, where the slabs are in the picture.

If I were on my balcony, and an Enderman caught sight of me, would he be able to pop on over to my balcony uninvited? Or would he not be able to fit through? Since I don't really need the balcony, I could probably glass-block it in. But I kind of like it as-is. It amuses me.

Endermen teleport close to you when you look away. In other words, if the room you are standing in is tall enough, a narrow balcony won't stop them.

Based on the Minecraft wiki, the vertical teleport limit of the Endermen is 3 blocks. So a balcony that is 3 blocks up is Enderman safe.

Remember that spiders can climb, and skeletons have a long ranged line of sight. In my city's walls, they can shoot me.

30
How to lightning-proof a structure?
25
What are the Endermen?
11
How far can endermen reach?
22
How can I better hunt Endermen?
6
Why are there mobs on my balcony?
7
Can Endermen spawn underground?
6
What blocks are iron golem spawn proof?