What is the max level in Kingdoms of Amalur?

What is the level cap in Kingdoms of Amalur?

And, perhaps more importantly, how many ability points will you have when you reach it? Is it always 3 per level? Can you get ability points in ways other than leveling up?

The maximum level you can gain is 40. This gives you 120 maximum ability points as you get 3 pre-picked ones in the beginning (as pointed out by RavenDreamer) and 3 with each level up.

This can be confirmed by a hands-on preview that appeared on NZGamer Feb. 1st.

Also by this image from the in-game manual:

While Marcelo's answer does an excellent job of pointing out the maximum level, the lesser half of my question, about the maximum number of ability points, has hereunto remained unanswered.

However, there are two ways to acquire more than the 120 ability points you get from level up.

The first is from epic gems. The Gem of Enlightenment gives up to 15 ability points, and one of the tree specific gems can potentially give up to 25.

The second, is from Purple and Gold armor pieces. Though I don't know what all pieces give the bonus (that is beyond the scope of the question), there are some items, such as the Mercenary's Boots, below, that also give +1 to all abilities in at tree, which means another potential +25.

On the other hand, 120 ability points is already a lot, and you may not wind up interested in half the skills you might be able to unlock (some are even exclusive; chakram and sceptre mastery, for instance). But if you're dead set on maximizing your number of abilities, this'd be the way to do it. 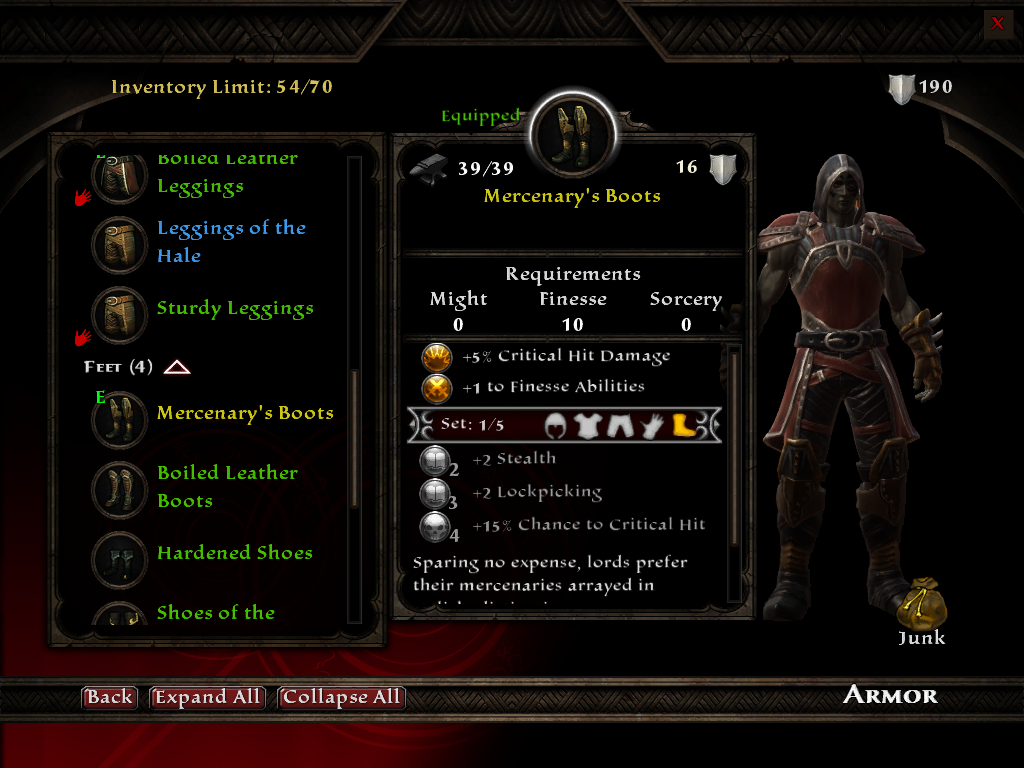 Level 40 is the max. With the assistance of trainers you can have practically all skills (i.e. lockpicking, etc,...) maxed out. I currently am only missing 5 more points to max out all of them and I have not finished the game. In addition, you can't contribute to tier 6 abilities if you do a hybrid UNLESS you only add a very small amount in one class while the majority of ability points are applied to another. When you visit a fateweaver you WILL NOT be able to reset the skills acquired through trainers or from character selection. This means if you create a character with +1 skill in lockpicking and a trainer gives you +1 in alchemy you will not get those points back when visiting a fateweaver. They will stay attached to those skills.

There is a utility gem or epic gem (it escapes me right now exactly which) that will add +1 to all abilities in the first 4 tiers for all classes. You can smithy a chest armor to include that gem. There are also accessories that help a great deal. You will also aquire perm changes to each class (might, finess, sorcery) throughout the game. You can be 3 or 4 or even 5 over the default max when it comes to an ability.

There have been few Warlords in the history of Amalur, and they were all respected and feared as the primal embodiments of conflict itself. This Destiny allows you to endure any and all attacks while laying waste to those who would dare to oppose you.

Tier 6 is the highest you're Destinies go ... so, I would say that level cap aint much higher!

I have pretty much finished everything one can in the Amalur. I made an archmage build and it was fun. Very very powerful with the area effect magic, weapons come secondary.

And now some corrections that were said above. Yes LV 40 is final and your experience does not go any higher after reaching this point (PC). No matter how many enemies you kill, no more experience points can be earned. You do get fate points but using it doesn't give you experience boost anymore.

I did 212 quests, 11 tasks open and the main questline finished. Maybe a few more quests can be done by finishing some tasks that actually can be finished? I tried to do über weapon with salvaging but it was never better in damage point of view than a staff I got in the end of the game. I sagecrafted a weapon gem with fire damage and got its damage to 207. My sceptre did 145 damage but I didn't use it so much.

My mana never run out with spells anymore except using sceptre in fights. The bad thing with sceptres is no rapid-fire by holding button down and the damage is not area effect. You can, of course, sagecraft mana regen gems and you are good to go but why not just use area effect spells? Much better and faster way to end fights.

Only bugs I noticed were pick-pocketing daggers from ambassador, later killing her and not being able to loot them anymore. The quest didn't check do I have the daggers already. The solution was to sell daggers to a fence and buy back and reach a good ending for the quest. Second bug was House of Ballads suit sticking to my inventory and not being able to sell, remove or add it to junk and destroy. You only need to wear it to enter Windemere the first time. Remove the suit to your personal chest asap or you'll have to carry it with you for the rest of the game. You'll also get much better suits later.

I ended up using spiritweave suit with a lot of slots for sagecrafting gems. Armor strength was 722 but I found a combination to go even over 750. If you make gems with health regen, you're invincible. I decided to make gems with day and night time damage to increase my over all spell damage. This way the game remained even something challenging in the boss fights.

My instructions for a mage build is to increase your spells' damage. Fear Gorta is very good after maxing its upgrades out. It heals you tremendously by hitting the enemies and acting as a tank. Your best damage spell is Meteor so get it as soon as possible. Mark of Flame will keep you alive before that. Also Tempest is very good area effect spell and charges much faster than Meteor. The best spell against Niskarus is Ice Barrage with its upgrade. Remember not to master only one element! By knowing two of them you can survive.

Forget mastering weapons except maybe one, it's just waste of points. Use repair kits and drink healing potions instead of getting the healing spell. Also Elemental Rage is the worst spell ever, they hit you before you can jump away. By increasing Sorcery you boost your spell power. Maximum is 7 of 5 which means in the end only +2 to Sorcery is necessary. Remember to look for lorestones, keep distance to your enemies and use area effect spells!

PhoebePhoebe
1
1
Add a comment  |
Highly active question. Earn 10 reputation (not counting the association bonus) in order to answer this question. The reputation requirement helps protect this question from spam and non-answer activity.

Not the answer you're looking for? Browse other questions tagged kingdoms-amalur-reckoning or ask your own question.

11
What determines the cost to respec?
9
What epic gems exist in Kingdoms of Amalur?