What am I doing wrong while battling a Sith NPC as a Trooper Vanguard?

Whenever I have to fight a Sith (Elites) even 2 levels lower than me (at 4 level lower, I can defeat them with few HP to spare), I tend to die. I play a 32 Trooper Vanguard and have level appropriate armor, weaponry (minus a couple of mods/enhancements that I need to level) and all class/vanguard abilities trained. I have Elara as my companion set to her aggressive healing setting.

Very occasionally, I'll have problems with elites having large damage rapid fire weapons, but slightly different tactics usually leads to my success. This does not happen with attacking Sith Elites

EDIT The one I was specifically referring to this time is the Sith Apprentices (Level 28) on Alderaan. These are one at a time. 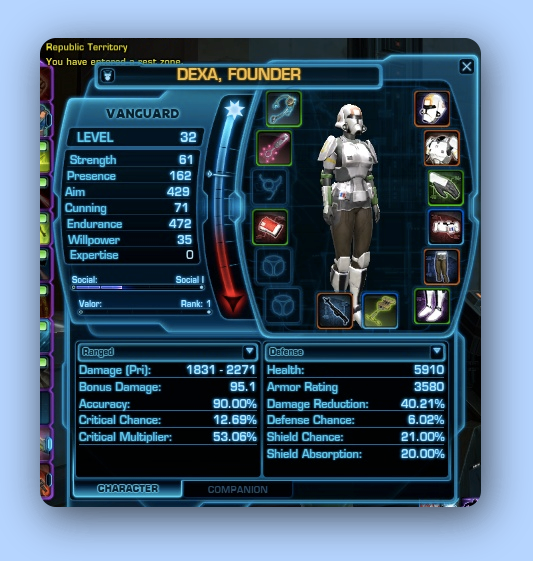 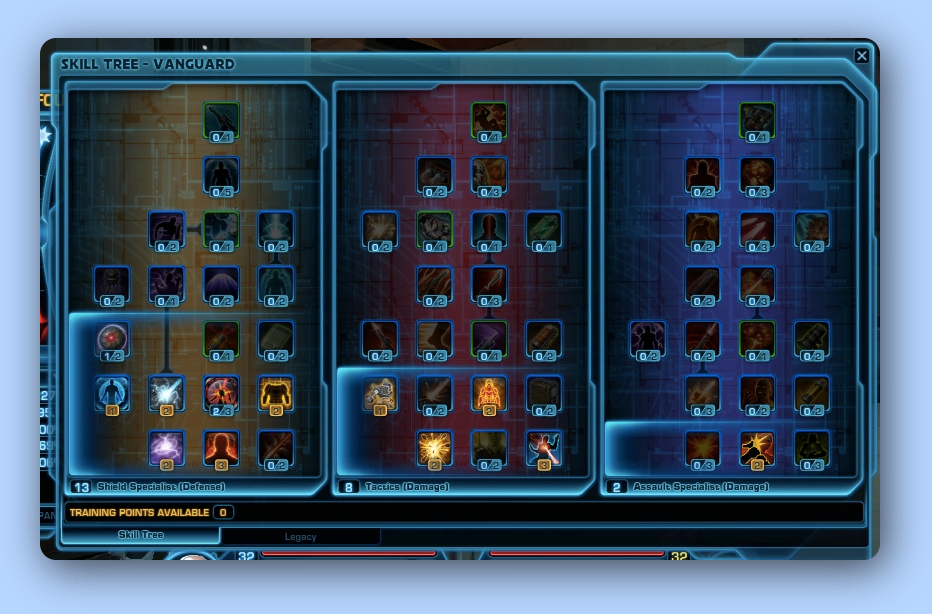 Is this a simple need for better armor/shield/enhancements with more Damage Reduction, Defense Chance, Shield Chance and Shield Absorption? I've been concentrating on Aim, but perhaps I should adjust my priorities.

Well there are few things wrong with your skill build that when you fix, and once you do, you should see the vast majority of your problems just melt away. I am assuming that you want to tank as you are climbing that tree and you are obviously using the ion cell, if this is incorrect please post a comment! The other thing you will want to change is your gear priority, as tanks should be grabbing endurance gear instead of aim. Your fights will last longer but it will be almost impossible for you to die fight anything less than elites of higher level.

So first thing you need to do is go to the fleet and respec to regain your skill points, the respec guy is located in the training hall and is called the skill adviser. Once you have all those skill points in your hands, it's time to concentrate on the tanking tree. You should lose the blaster augs, the power armor, demolition and the heavy stock. Those are all great choices for your skill points, but after you have run up the tank tree as high as you want to go.

You do have a couple of decisions to make about which exact route you should take, mainly do you want to concentrate on close range or long? Each have different trade offs and neither is really better than the other so you should pick off your play style. Basically, if you like to move you should go long range and if you like to hunker down and bring them to you, go short. 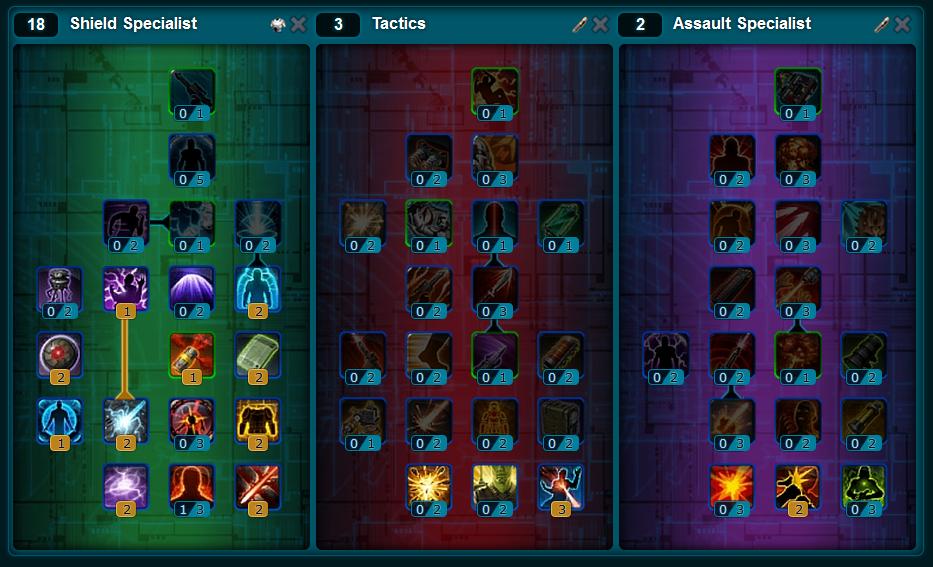 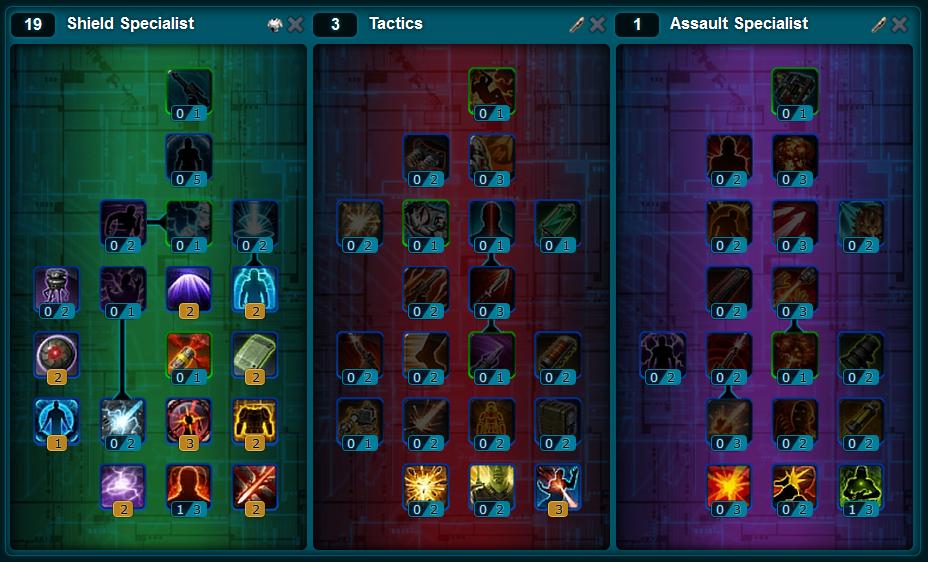 So some analysis to back up the choices that I've made and that will hopefully guid your future choices.

The short of it You are there to take a beating, but you want to hand one out as well. By increasing the skill points you spend on Stockstrike, you gain a lot of abilities and chances at blowing your most damaging attacks. You are basically going to close with the target and then unleash your taunts and grapples to keep the aggro on you and off the healer that is keeping you up. The 100% trigger rate on your ion cell means that you can hit the target with High Impact Bolt as soon as it cools down and that hit will ignore 60% of the armor... which is a big deal on some of those elites you're trying to kill. You also get pretty good endurance gains and damage reduction gains so you will actually stay up even taking a lot of dps. This build really does need endurance gear to make it sing as you have to be close and most elites and champions have some kind of knock back so you have to be able to survive the run back.

The long of it Stick and move, stick and move. If you like to move, this build counts on you moving in and out of range of your enemies and using your long range abilities to manage the aggro. You need to be good at strafing and making sure you don't leave the area of the fight, because if you stray to far, the guys regen and you have to start all over again. That said, since you are using range and movement to mitigate the damage, you can wear less endurance gear and do a little more damage. You also write off stock strike and concentrate on your instant attacks and normal attacks, and you should use your channeled abilities only to restore agrro.

your equipment is not all filled out, fix that ASAP. You're lacking an implant and 2 relics. Go to the fleet and check the GTN. Also, in the case of the relics, you can buy them for cheap at the alignment vendor in the fleet (dark or light). You're missing a lot of hit points from missing those 3 items.

As for strategy against sith apprentices, basically interrupts are your friend. See if it's using a long cast ability (you see a progress bar filling near the target info) and interrupt if it's using it, those hurt a lot.

As far as the companion goes, I have found better success with DPS companions when I'm a tank (some people may be gasping here). I send the companion first, then me. When the companion is low health (about 25%) I taunt the mob to me so it attacks me. That's almost like having 2 full health bars while doing 2x dps. But using a healing companion works too, it's what everybody does, but it's much slower.

Sith NPCs are generally somewhat harder than the rest (probably intentional, as it fits the setting). However they shouldn't give you too much trouble if you know how to handle them. Their main damage output seems to come from various special abilities, which you need to interrupt. Learn which abilities cause the most harm to you and use your stuns, interrupts and knockbacks when you see them use those (Cryo Grenade, for example).

I also assume you're using the right kind of companion - in your case (majority of points in the Defense tree), that should be the healer (Elara Dorne for troopers). Furthermore, the defense tree usually goes with a shield generator in the off-hand slot and the Ion Cell ammunition, which gives your armor a major boost.

Speaking of your skill point distribution - generally it's a better idea to focus on one tree and ignore the others until you've got all you wanted from that tree. This is because the top tier abilities usually offer a bigger benefit than the low ones. Also the green framed icons give you a useable skill which will often be of major benefit (for example, the Defense tree's Smoke Grenade debuffs enemies accuracy, making it much harder for them to hit you). The Skill Mentor at Carrick Station (combat trainer area) can reset your skill points for you (once a week for free).

You may also want to fill up those empty implant and relic slots for some extra stats.

If you're really still struggling, there's also several short (Reactive Shield, Adrenaline Rush) and long (No Retreat) cooldowns you can use.