Why am I seeing Diddy Kong's face everywhere?

On various tracks, I see pictures of Diddy Kong - they are framed, and everything. 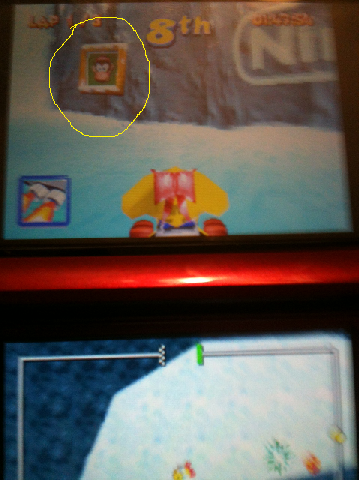 Do they serve any purpose? Or are they just everywhere because, well, the game is named after him? It seems a little strange, and it looks like I should be able to interact with them somehow, but I haven't been able to figure it out.

They're just decoration. Faces of other characters appear in-game as well.

The faces of some of the characters (Pipsy, Bumper, Krunch) appear Wizpig-style on an icy cliff-face in Snowball Valley. Just before you go through to the snowball run of the level's title, look to the side to see the faces. These are also featured briefly in the ending sequence.

See This FAQ on Gamefaqs (Quoted above). It doesn't mention the pictures of Diddy specifically, but it does point out little-known interactions and graphics.

Some of the decorative graphics do serve a purpose though, such as the billboard by the lighthouse.

Not the answer you're looking for? Browse other questions tagged diddy-kong-racing-ds or ask your own question.