Why does Skyrim keep wanting to install?

I've installed Skyrim and registered it with steam. I've tried to run it through steam, from the setup.exe in the disk and the TESV.exe in my steamapps folder but every time it tried to install the game again, then fails.

If Steam is closed, and I try via the disk, it loads the splash screen with an option to run the game but shortly after it just pops up with the install skyrim splash screen.

Why is this happening? How can I get around it?

So I've tried to follow the advice here and renamed my folder (called VCredist) which just causes Steam to tell me that skyrim may not have synced with the cloud correctly. I've tried renaming installscript.vdf which also does nothing. I've got Kaspersky running, and have had to (due to unrelated shennanigans) rename my steam folder steampowered, which is the only remaining thing that might have caused an issue. Would any of these caused the issue? Of do you think my DVD is broken?

Here is what the splash screen looks like. Does it give anyone a cluse as to what's wrong? The 'install' button seems wrong. 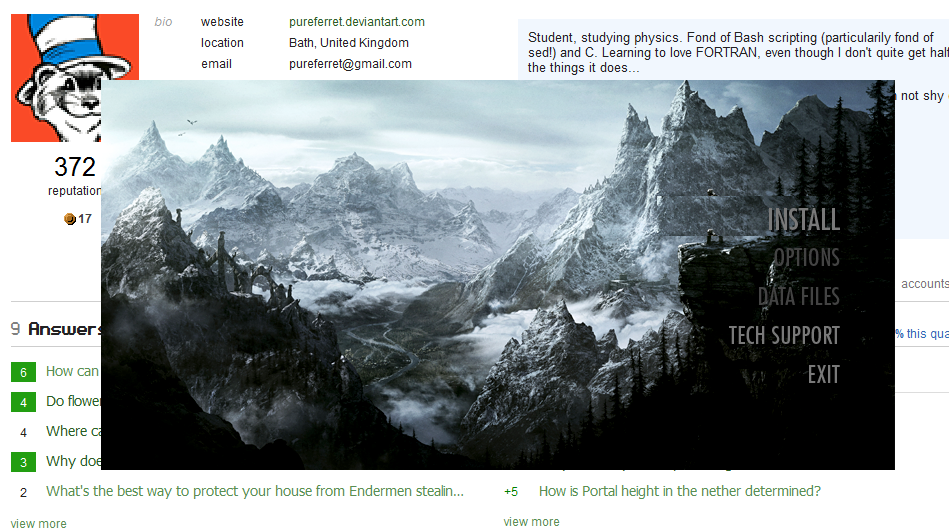 The only thing that worked was for me to reinstall Windows (!) and then reinstall Steam and Skyrim. The next step that the Bethseda Tech support suggested was to create a new user account, but like I said I skipped that and did a fresh install.

My initial suggestion was to run TESV.exe but you've already done that. I'm not sure what is happening here it's rather strange but I have heard of this issue before. The only thing you can try is to backup your save files, delete local content and re-install Skyrim. This should fix it for you.

I had this same problem.

Instead of running the setup from the disk, open Steam and click the 'Steam' button on the top tab. Choose 'Backup and Restore games' and select the backup location as the disk. This should install the game from the disk without any problem.

If this doesn't work, then your disk is probably corrupted.

Steam reads its install status from an installscript.vdf file in the game's steamapps directory. You can try deleting that (after a backup, of course).

Shot in the dark, though.

Check the skyrim folder for a folder named "redist." This is for directx etc. Try renaming that folder to something like redist_BAK.

Not the answer you're looking for? Browse other questions tagged the-elder-scrolls-v-skyrim pc .

3
Skyrim settings not saving. Forced into windows mode at 800x600
5
I can't get past the opening splash screen when I try to start playing Skyrim
3
How can I get Nexus Mod Manager to recognize my Skyrim installation?
0
Skyrim Xbox 360 disc not working
20
Skyrim instantly crashes to desktop
1
Installed Morrowind, suddenly the data files of Skyrim transform into "Morrowind Plugin"
2
Skyrim SE crashing when not connected to External Monitor
1
Transfering Skyrim save from Windows to Linux
1
Skyrim Controller Controls Keep Resetting