How do I keep skeletons from jumping in my xp farm?

I have a simple xp farm using a skeleton spawner. My main problem with it is that the skeletons won't stop moving.

Here's the basic setup as I have it right now:

The skeletons fall down into the tube, and I can stand and punch them through the gap without allowing them to hit me. The problem is, they like to jump up and down, as if trying to escape, so it's hard to hit them. How can I keep them from jumping while still letting them come down for me to hit?

Actually, their jumping up and down helps, I think — assuming you're using the “idle to collect a lot of mobs, then kill them all” strategy.

In my skeleton-punching endeavors, I have found that, as best I can tell, dead bodies absorb hits. If I have mobs trapped in one spot and I hit in the same direction repeatedly, then only one or two will die, then nothing happens until the bodies vanish.

Therefore, if they are jumping, some of them will pop up while dying, allowing you to get more hits in. In fact, to further improve matters, I've widened my skeleton holding pen to 2 blocks wide so that I can alternately hit one side and then the other. (This picture shows only two skeletons because I just walked over to take it; ordinarily there would be a lot more, and some of them will constantly hop between the two open blocks.) 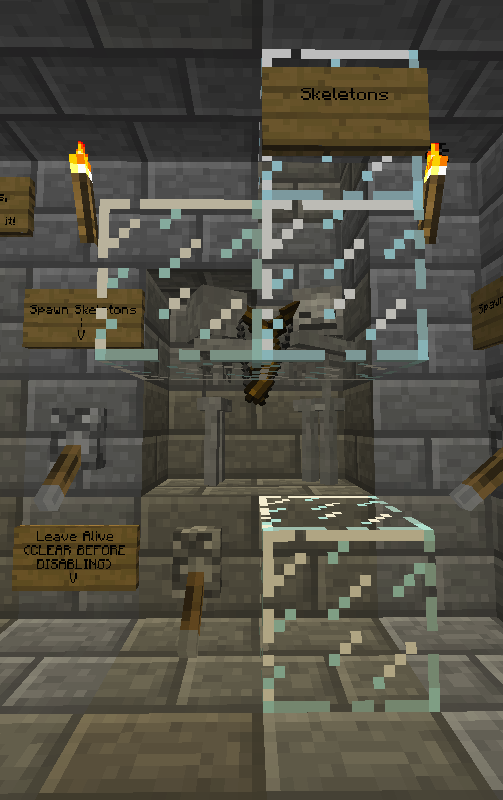 On the other hand, if you really want to stop them from jumping, such as if you only have one or two at a time, then here's some ideas:

I have never found skeletons jumping to be a problem. (no idea why in this screen shot they are not jumping. Usually a few of them are.) I let them accumulate in my trap, then toss an instant healing splash potion, kill them all, and just sit and let the experience ring in. The trick is to have a big enough fall (23 spaces) so that when they land the have 0.5 hearts. Then a single love tap with a watermelon slice kills them if you don't want to go the potion route. 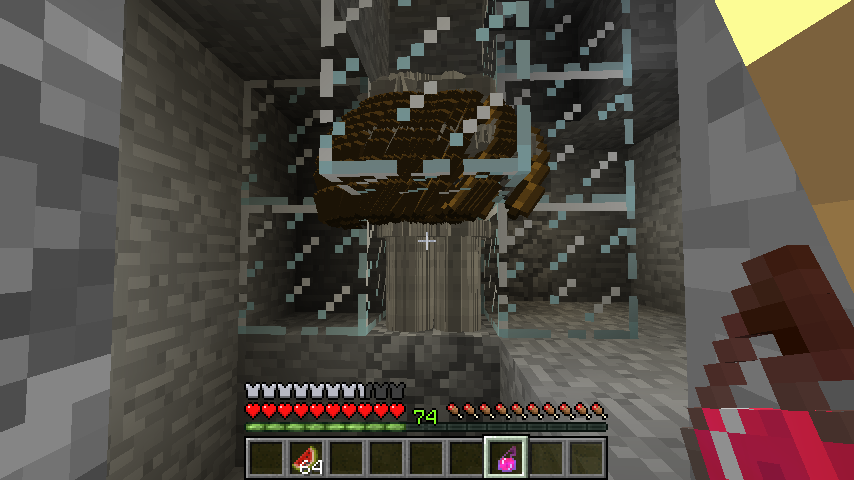 You need to finish with 1 dry block before they fall down, so that they won't jump, but push each other off the cliff. Don't put water at the end where they fall, because they won't take damage (or not enough) when landing on water.

re do as such:

this prevents them from jumping. or add a trapdoor controlled by redsotone leaving two blocks of air.

61
Is there a way to keep Zombie Pigmen off of minecart tracks in the Nether?
4
How to make a tree miller
17
How can I bring zombies down to one-punch kills in Minecraft?
4
XP Grinder Optimization
4
How does this spawner farm work?
5
Vertically stacked armor stands should have increasing scores, but don't
1
Cave spider trap issues
6
How to make endermen die in one hit, without the use of fall damage?
1
What's wrong with my mob farm?