How does Reputation work in Mass Effect 3?

The change to the Paragon/Renegade system between Mass Effect and Mass Effect 2 was pretty significant. In the first game, you could eventually unlock the entire Charm / Intimidate trees, and attaining either kind of points was a positive thing. In Mass Effect 2, you were no longer able to dabble in both kinds of actions - if paragons didn't continue to act as paragons, they could eventually lock themselves out of potential charm dialog.

In the reviews and pre-release info that's now circulating the web, I've been hearing that the Paragon/Renegade system has changed again, replaced by a more generic-sounding Reputation. What is Reputation? How is it different from the system in ME or ME2?

The Bioware blog recently posted about this information, which I'll summarize here.

Earning reputation in Mass Effect 3 is a bit different from the first two games. Rather than earning only Paragon and Renegade points, you can also earn Neutral reputation, so there are 3 types of rep in ME3.

This means you can now mix being Paragon/Renegade without worrying about getting locked out of the more difficult Charm/Intimidate options. When you earn Paragon/Renegade rep, it'll show up as Blue/Red, whereas if you earn Neutral rep, it'll increase your reputation bar's size as a whole while retaining the same blue/red ratio. 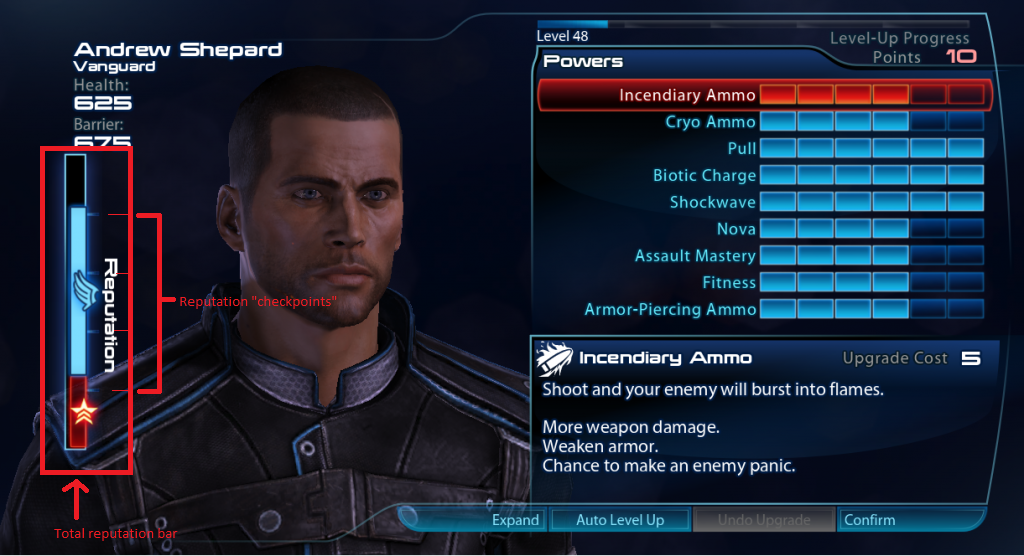 Your total reputation (blue/red/neutral) will determine whether or not you'll be able to pass a Charm/Intimidate block. The lines on the bar are "checkpoints" which serve as gates for more difficult dialogue options. I marked them with the thin lines of red, in case it was difficult to see (this is not my Shep, this is the photo from the blog post).

As per usual, you get rep from completing missions and making dialogue choices. For missions with no Paragon/Renegade choice but still have a large impact, you will get Neutral rep.

In contrast to older Bioware games, you can never actually be the villain in ME3, though this should be rather clear from how they handled the first 2 games. No matter what, you will be fighting to save the galaxy. The manner in which you do it will be what differentiates a Paragon from a Renegade. Also, bullying people into giving you more money or discounts won't be the crux of what makes a Renegade decision in this game. Who needs credits if there's nowhere to spend them because civilized life has been destroyed?

Reputation gain will be based on when you have to make a decision in the game. Here are a few examples of what kind of rep you would get, taken from the blog:

BioWare has finally made a single-player game that lets you make morally grey choices without nerfing yourself, gameplay-wise. Rejoice!

4
What advantages are there to high reputation?
0
Does morality have any effect?
19
How do you get the last paragon/renegade dialogue option towards the end of the game?
13
Is there a maximum to the amount of paragon/renegade points in Mass Effect 2?
6
Does paragon/renegade/neutral morality affect the storyline or available missions?
5
Brokering peace between quarian and geth options don't appear
4
Can you get the good endings if you play a purely renegade Shepard?
0
Do renegade points outweigh war assets if I let Samara die?