Why teammates appears differently in mini-maps?

I played infected for the first time today.

I wasn't sure how the game should be played, I gave a particular attention on minimap.

I saw at least one "doubled" green triangles (teammate). I thought it was because he got infected...

Later I played a Team death match KC and I saw the same doubled triangle.

What does it mean ?

Here's a screen shot of this video. 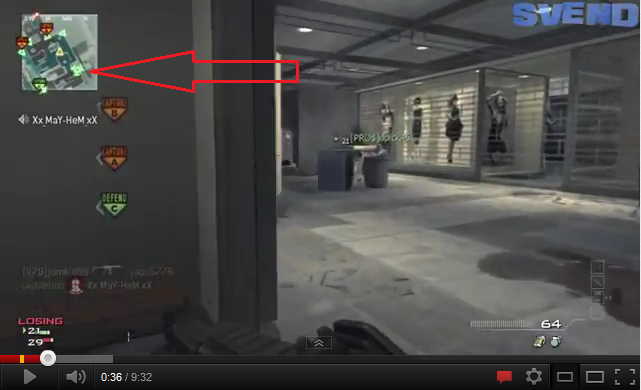 Why the teammate pointed by the red arrow appears differently ?

Upon closer examination, this seems to indicate that a teammate just spawned. In MW3, for a few seconds after spawning, teammates are immune to enemy UAV and similar killstreak rewards. If you've ever used the recon drone you may notice that when players first spawn there is no red box, but then a few seconds pass and the red box appears. If you watch that video starting at about 0:34 you'll see that player spawn, and then the addition hash marks around their arrow gradually fade. This would seem to indicate that once the marks are gone, your ally is visible to enemy killstreaks.

Not the answer you're looking for? Browse other questions tagged call-of-duty-modern-warfare-3 .

4
Why so many SMGs?
15
Why does money fly out when I die?
3
Maps used online VS places in campaign mode
7
Why is everything exploding?
0
Why do I have a 2 kill streak?
1
Why don't you always get points for destroying a headquarters?
14
Why am I 100.3% complete with the campaign?
4
Can "Goodbye" challenge be completed on maps besides Seatown?
0
How to learn Survival Mode maps in MW3?
3
Why do multiple people get muted? (MW3)