I'm playing a soldier and I've got both Incendiary Ammo and Disruptor Ammo at level 4. I see that at level 5 for each, there's an option for +30% ammo. 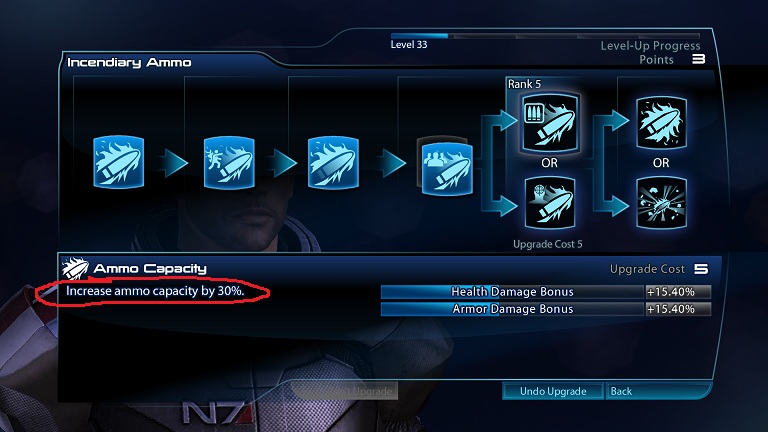 I'm trying to plan out my build but don't currently have the skill points to test this out for myself.

I tested this using a Vanguard with access to both Cryo Ammo and Incendiary Ammo at the Shooting Range on the Citadel, with an M-3 Predator with a base ammo capacity of 105 (90 + 15 in Clip).

After learning the Rank 5 Incendiary Ammo upgrade for increased capacity, my max ammunition remained the same until I activated Incendiary Ammo. After activating the power, the clip size remained at 15, but my reserve capacity jumped from 90 to 116, for a total of 131 rounds.

I then learned the upgrade for Cryo Ammo. When activated, the reserve ammunition jumped to 116 again, clip size remained unaffected.

No, they do not stack, and Yes, they only work when the Ammo Power is currently activated.

Additionally, it appears that ammo bonuses from squad members do not work at all. For instance, if Shepard has Disruptor ammo with the 30% ammo bonus, Garrus with AP ammo and the 30% ammo bonus, and Vega with Incendiary ammo with the 30% ammo bonus, then Shepard will not have 90% extra ammo because only his 30% bonus is applied to him. This includes if you got the squad-ammo-at-50% trait, as that bonus only applies to the last ammo power activated in the fireteam. The AI does not appear to use ammo, so you might as well have your friends take the headshot damage bonus, because at least that might function.

10
How can I plan how much weight capacity I'll need?
11
What specific Bonus/Loyalty powers are available?
6
Is there any reason to NOT use my ammo mods? How can I use them to greatest effect?
7
Can my squad mates run out of ammo?
7
Will I be banned if I use a tweaked Coalesced.bin file in multiplayer?
5
What happens if I switch Bonus Powers?
1
How much better are the higher levels of the ammo bonuses?
16
Does shattering a frozen Reaper prevent his friends from eating him?
1
Power build and play strategy in mass effect 3 - Radius/Range vs Damage?
2
Can ammo powers override other powers as combo primers (or block them)?