Who are the numerous that died?

When I started a new ME3 game, it asked me to choose if Ashley, Kaiden, or Numerous died. Who are the numerous? I chose numerous because I hoped that meant some no-names, but if numerous is the entire ME2 cast that would be quite fail.

In order to clear up some confusion, when you start a new game, the following individuals are dead, regardless of your selection at this point in creation:

All answers should provide concrete evidence of any claims made. Please do not speculate. Please keep in mind that the default profile includes several notable casualties. This question is about which casualties make the 'Numerous' selection distinct.

The following is the memorial plaque wall when you start with a new character and select the "numerous" option. As you'll note, most of the squad members from Mass Effect 2 are still alive: 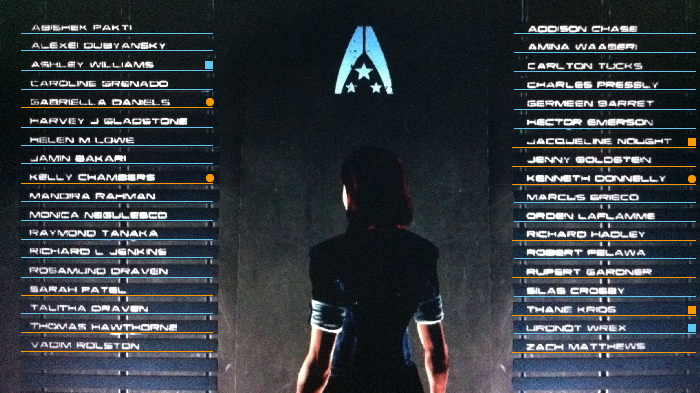 Those names underlined in blue are the original crew members of the Normandy SR-1 who died in the beginning of Mass Effect 2, along with the two squad members Ashley Williams and Urdnot Wrex (marked by blue squares). Kaidan was chosen to be alive because I was playing a female Shepard; when playing a male Shepard, Ashley will be the Vermire survivour.

Those names underlined in orange are all crew and squad members from the Normandy SR-2. Those marked with an orange circle, Gabriella Daniels, Kenneth Donnelly, and Kelly Chambers, would have all made notable appearances in Mass Effect 3 had they not died. More specifically, the former two can be brought back aboard the Normandy in their usual positions as engineers, and Kelly Chambers is a potential romance/fish keeper* depending on your interactions with her in the previous game.

Thane Krios and Jacqueline Nought (Jack) appear to be the only squad member from Mass Effect 2 that's listed as having died, and are highlighted on the wall by the orange square.

Everyone else not on this list is presumed to be alive, and not one of the "numerous who died." In particular, Garrus, Tali, Miranda, and Jacob are all listed as alive. However, the game will act as though you never met Samara/Mordinth, Grunt, Katsumi, and Zaeed, effectively killing them. It will also act as though the original Council died during the attack on the Citadel in Mass Effect 1.

*that is, she returns your fish from Mass Effect 2 to you; you need the aquarium VI or extreme patience to keep them alive

The problem of course is that this is the same list of people who would have died if you had simply chosen the Ashley/Kaidan option. In comparing the two save files, one from a "numerous" selection, and one from a "Kaidan" selection (using male Shepard to keep a consistent Vermire casualty), there's actually very few differences between the two scenarios.

The tables below illustrate the difference in game variables before you perform any action:

At the moment it's unfortunately unclear what these changes represent, because they don't directly map to any of the significant and/or labeled plot events that the game has. Presumably they have some noticeable impact, however, so I'm going to keep digging until I get to the bottom of this.

Per the Rarity Guide:

The deaths of numerous squadmates and friends have begun to play a significant role in Commander Shepard's psychological profile. The burden of inevitable combat loss after so many high-risk missions weighs heavily on Shepard.

Note: Numerous means that Either Kaidan or Ashely, as well as many other crew members, died. There will be a memorial later in the game aboard the Normandy mentioning those deaths, if you choose this option.