How exactly does Force translate to Damage?

So, for some reason, the Mass Effect series likes to express the potency of various abilities - particularly biotic powers, in Newtons of Force, rather than the amount of damage they deal.

Force is a comparative measurement just like damage is. You don't actually see the health of your opponents or their damage mitigation, however because ability "A" does more damage than ability "B", than ability "A" must logically take more squares off the enemies health meter.

The same holds true for force. If ability "A" has more newtons of force than ability "B", then it will push the enemy further, or higher or whatever you are trying to achieve. If your trying to translate damage into force, you are really just translating two non-numeric relative measurements.

Also note that impact force can affect shields as well, for example Shockwave. This is again an abstract measurement, if an ability has more force than another ability, the ability with more force will cause more damage to the target's shield.

Edit, here is a technical diagram I drew in paint: 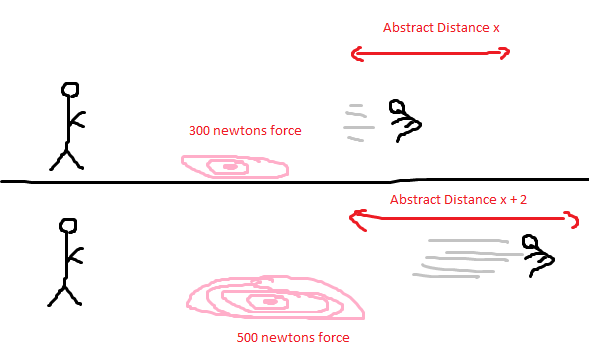 Here I used Throw to push away a Husk. The Husk was in melee range and I threw it back with 600N of force, and it ended 6 "strides" away from me. A stride being one full step from Shepard. Note that the effect was not the same (or even close) on much more armored opponents. This effect was reproducible on two more Husks. I currently do not have any other ability that exerts "force" to test. 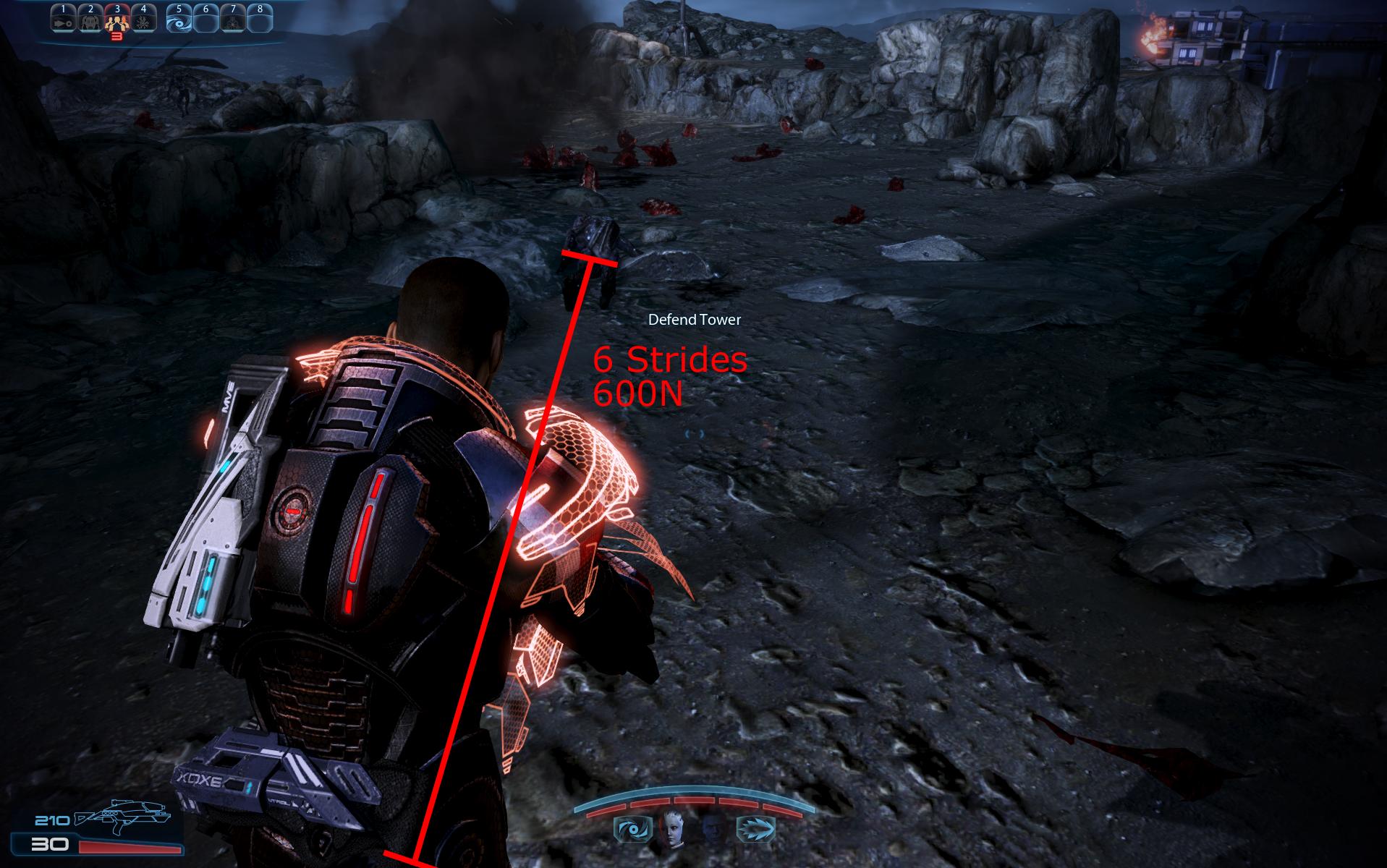 Here I used Throw rank 3 to push away another Husk, the same conditions applied. This was tested twice. 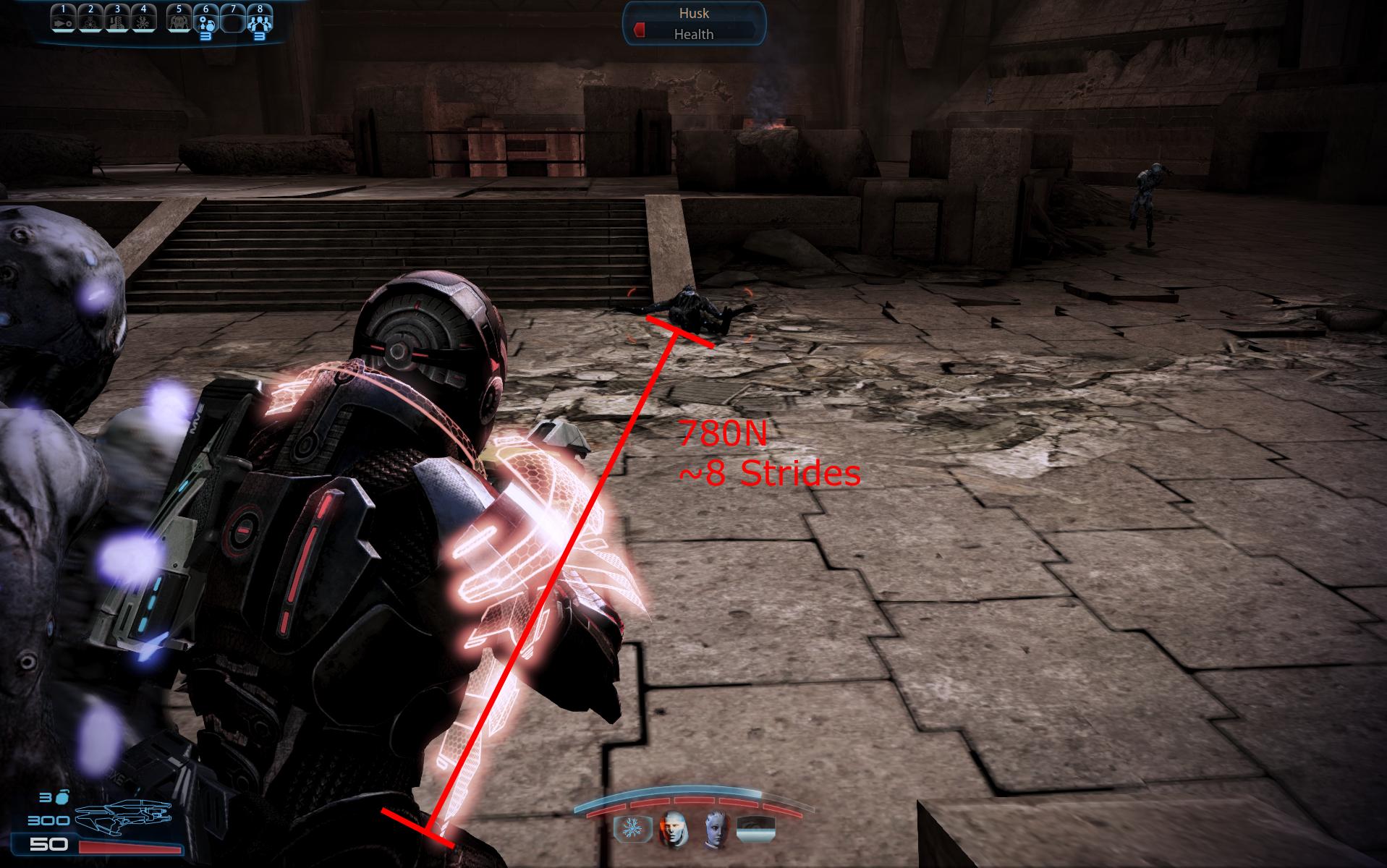 This means an extra 180N of force produced an extra 2 "strides" of pushing distance. However we can account for rounding problems in calculating strides to conclude that,

Here are just some of the factors that would play into the amount of damage a forceful effect would have:

All of these will also, of course, apply to other situations where an enemy collides with a surface (e.g. falling). There's a complete physics simulation involved, so trying to directly translate to damage is doomed to failure.

0
How much damage is dealt per Newton of force?

6
Do bonuses to power damage affect damage from grenades?
7
Does the Weapon Master damage bonus affect squad ammo effects?
1
How can you tell exactly how much an Upgrade augments your weapons in Mass Effect 3?
3
Does Explosive Hack deal damage only to enemies?
5
What exactly does “Explosive Burst” do?
5
Which assault rifle does the most damage per second?
9
Does “no scoping” do less damage then scoping
1
How does weapon damage work?
0
How does the Venom Gauntlet poison damage work?