Where are all the fuel depots located?

In my quest for acquiring everything in the galaxy and annoying the Reapers to death with my pinging, I'm noticing a big fuel deficit in the galaxies.

I'm looking for a good reference list as to where I can refuel my ship and continue with my ultimate journey of using electronic sensors to pester the Reapers to death!

Toward the end of the game at least, the functional fuel depots seem to mostly be concentrated in the lower left-hand corner of the Galaxy Map. In the following image, systems with fuel depots accessible directly from Mass Relays are circled in green (six total): 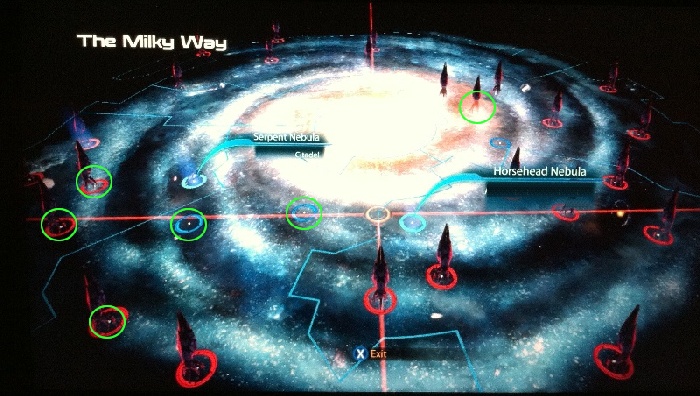 As you may already know, most systems will also contain fuel depot wreckage sites that you can scan for, for a one-time fuel bonus. However, if you're just looking to quickly top off your tank, visiting one of the above-circled systems is the way to go.

In particular, I believe Annos Basin (to the left of the selection cursor on the map) is available to the player for most of the game, and is never marked as being Reaper controlled.

2
Major benefits to scanning the galaxy?

27
What are all the ways to increase readiness?
3
Where can I find all the loading screen tips?
4
Where is all the Brute's base armor
5
Where are the Manual Overrides?
6
What the heck do I do at the N7: Fuel Reactor mission
2
Where are the Cerberus ciphers?
2
Are all weapon mods compatible?
9
Where are Mass Effect 3 saved games located on PC?