Should I buy the Spectre Requisition Terminal weapons?

There are a few weapons available from the Spectre Requisition Terminal in the Citadel, but they're all crazy expensive. As far as I can tell, there's really no way to determine how their stats stack up against what I've already got.

What weapons are available here throughout the game? What distinguishes them from other weapons I find or buy along the way? Are they worth their cost? Are there better weapons available elsewhere?

Pistol M-77 Paladin:
It can be purchased from Spectre Requisitions terminal in the Spectre Office at the Citadel for 200,000 credits.

The scorpion pistol, available on Salarian Homeworld Sur’Kesh, can fire sticky explosives making it a better choice (depending on your needs).

Shotgun M-11 Wraith:
It can be purchased from Spectre Requisitions terminal in the Spectre Office at the Citadel for 250,000 credits.

The plasma shotgun, available on the Rannoch mission, is probably superior to this weapon.

Sniper Rifle Black Widow:
It can be purchased from Spectre Requisitions terminal in the Spectre Office at the Citadel for 250,000 credits.

This is devastating in the right hands, like a Vanguard on a kill spree, and is worth every credit.

The only way to obtain the 3 Spectre class weapons is to purchase them to through the Requisitions.

When compared to other weapons you can find in the game, they are extremely powerful, but not necessarily in all categories.

For example, when comparing the Black Widow to the M-98 Widow, it does less damage but has a faster firing rate.

The Paladin has great damage for a hand gun, but has less fire rate than the Arc Pistol (given to you by Tali during the geth mission). But it weighs half as much.

However, the main attraction of these weapons is the possibility of buying them much earlier than obtaining the super powerful late game weapons (assuming you save up your money for the spectre weapons and nothing else!).

Here is a fairly good chart that compares all the weapons

Here are some screen shots of comparable weapons with same upgrades/mods: 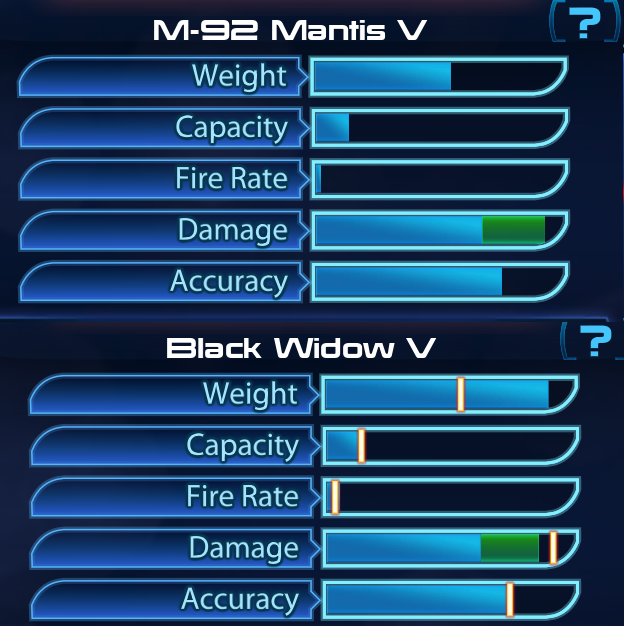 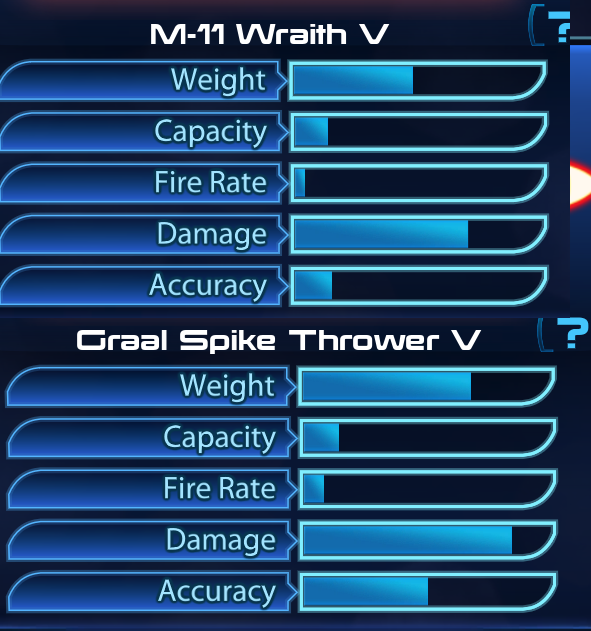 There's just the 3 you can get at the start. They're good, but not always uniquely amazing. They're basically black-market versions of other weapons in game, slightly modified.

M-11 Wraith (250,000)
This is basically a better version of the Eviserator but it has slightly less capacity. Modest weight requirement, very high damage shotgun with otherwise average stats. It's not amazingly superior to the Eviserator, which is in comparison extremely easy to get.

M-77 Paladin (200,000)
A super light, super accurate, high damage pistol, this appears to be identical to the M-6 Carnifex. You can pick up the Carnifex for free during the mission Arre: Ex Cerberus Scientists so I have no idea why you'd buy this honestly.

Black Widow (250,000) Slightly modified version of the M-98 Widow Sniper Rifle, this gun has higher capacity for more bullets between reloads, higher fire rate, slightly less damage per shot and it's slightly less accurate. The fire rate and capacity boosts seem to make this one worth it.

Specre Requisitions also gets a few other items if you miss armor/mods on missions, but there's nothing special about them. For example I just found the Rosenkov Materials Greaves there for 5000, they're only there because I missed them in a mission, they're not Spectre specials.

What you see is what you get. The three weapons listed there are all that's made available from that terminal for the duration of the game. I can't reliably speak to the assault rifle and pistol (the pistol is described as having more damage, at least), but in the case of the Black Widow sniper rifle, the primary benefit is the extended clip size coupled with the significant base damage of the Widow itself.

Now, as to whether or not they're worth the cost...that's a judgment call. However, I'll note that prior to entering into the final mission, despite having upgraded my primary weapons, bought two sets of armour (for the related achievement), and endulging myself with the world's most expensive fish feeder, I still have about 650,000 credits to burn. So, if you're in the market for only one of these weapons, you can definitely make your purchase later on in the game without much regret.

There aren't drastically more powerful or otherwise useful weapons anywhere else in the game, but these weapons might not suit your play style or be effective enough in certain areas for your needs. While they're intended to be quality military hardware, they don't completely outshine the other weapons like the Spectre gear did in Mass Effect 1.

If you're looking for a direct comparison of the stats, you may be interested in this spreadsheet. Based on the information there:

To be honest, the spectre weapons are not the "best" in their category, but they are usually the most versatile or fill an awkward role in that weapon category. I play a soldier, I've already beaten the game twice, and I've used every weapon on insanity against both reapers and cerberus.

The paladin is the single highest damage to weight ratio gun in the game and can very easily fill the role of a sniper rifle (when you attach a scope) with almost no weight. The carnifex has less damage and weighs more, so the paladin is just a better version in both respects. It also absolutely wrecks armored enemies. Even on insanity, 9 shots from a paladin X will kill a brute. Of the three, this is my favorite.

The wraith is the versatile shotgun. It isn't THAT heavy, but it does good damage and has moderate range; however, the grall spike launcher and geth plasma shotgun completely outclass it in both range and damage. Go with one of those if you rely on shotguns. This is the worst of the three.

The black widow is an excellent gun, but I find the weight and ammo capacity to be debilitating. While ammo is everywhere in ME3, the high damage snipers are still unable to stay useful in a prolonged fight. On lower difficulties, it's a great gun that one hit kills all the time; on insanity, the raptor is the unquestioned king of the sniper rifles with massively superior ammo capacity, higher DPS, and better versatility.

The main attraction to those weapons is that they pierce the targets even without mods, in case you all missed it!

19
How do I keep my fish from dying?
2
What is the most expensive item in Mass Effect 3?

1
Why are quest items not showing up in the Spectre terminal?
5
What weapon stats matter for squadmates?
1
What upgrades are available at the upgrade terminal near Glyph in Liara's Room?
2
Can you drop and reacquire the Hanar Diplomat quest?
2
Is a Melee spec character viable in Silver/Gold difficulty?
10
Spectre intel terminal authorizations from ambient conversations
16
Does shattering a frozen Reaper prevent his friends from eating him?
8
What is the nature of reaper destroyer weapons?