Why is Anderson not a councilor?

In both my ME1 and ME2 savefile I had anderson as a councilor. I just never liked Udina.

Yet this choice seems to have been ignored when importing my save.

Is this an error, or is the choice explained somewhere?

If you appointed Anderson to the Council, he steps down later to prepare for the Reaper invasion. You can read up on this in the codex: 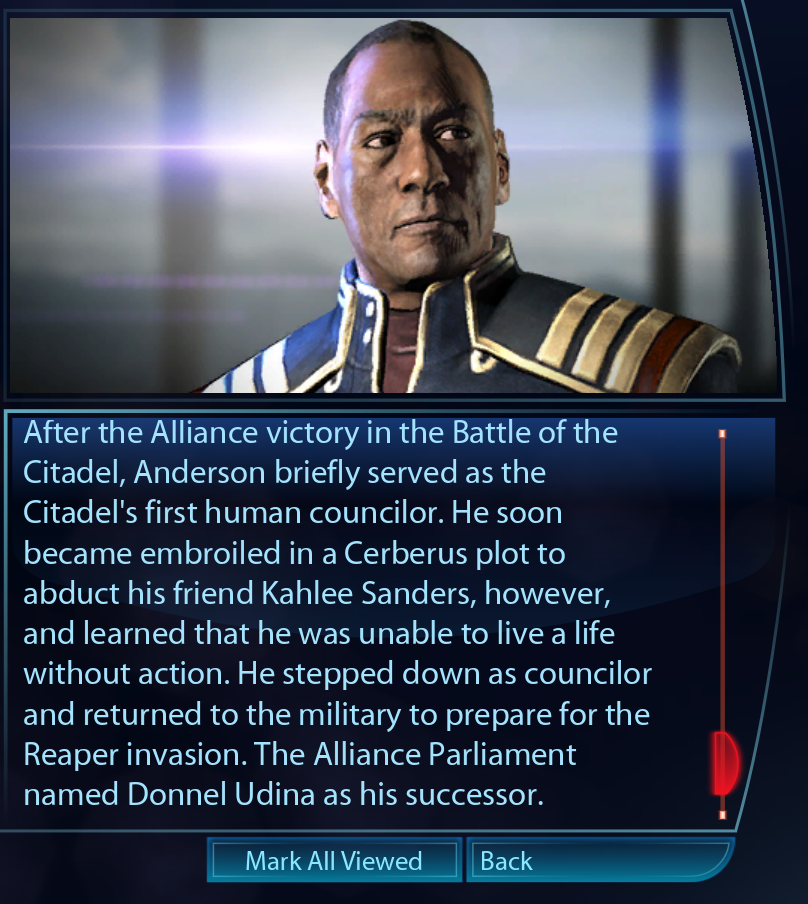 After the Alliance victory in the Battle of the Citadel, Anderson briefly served as the Citadel's first human councilor. He soon became embroiled in a Cerberus plot to abduct his friend Kahlee Sanders, however, and learned that he was unable to live a life without action. He stepped down as councilor and returned to the military to prepare for the Reaper invasion. The Alliance Parliament named Donnel Udina as his successor.

The events mentioned in the codex take place in the book Mass Effect:Retribution.

In the novel Mass Effect: Retribution, Anderson hands over the political negotiations he was in charge of to Udina in order to assist Kahlee Sanders from the Grissom Academy with locating Paul Grayson.

If you had chosen Anderson to be the Councilor, it's mentioned in his codex entry that he transfers his office over to Udina as part of these events. With the pending Reaper invasion, and since he prefers the military life anyway, there's no reason for him to have attempted to retake the councilorship. You therefore rightly find him in military uniform in Mass Effect 3.

He steps down. But also its interesting to note if he was counsilor then his uniform displays 3 gold bars and 1 red on his shoulders and if not he has 4 gold bars

I think ME3 continues from choosing Udina as councilor as Anderson is called "Admiral" and he is promoted to this status in ME2 if Udina is chosen as councilor.

Either that or you told Miranda that you recommended Udina at the start of ME2, this affects it as the councilor decision takes place after you destroy Sovereign, at which point the games doesnt save it as the final save is before Sovereign. This may be because of the fact that ME1 had no 'Aftermath'.

0
When did Udina become Councilor?
6
Who is Kai Leng?
-2
What decisions must be made to avoid conflicts with official, non-game publications?

14
In Mass Effect 3, I did not get a choice of game mode; is it because I imported a ME2 character?
9
What does Fortification do?
6
How do I save Anderson?
6
Is there any granular way to change decisions made in ME1/ME2 to see different outcomes in ME3?
10
What happened to the Female Krogan?
11
Why did Eve die with Maelon's data available?
3
Mass Effect question on New Game + romance
6
Mass Effect 2/3 Download issue on Origin at 100%