So I like playing on silver and occasionally gold in Mass Effect 3 multiplayer, usually with random enemies. Of course each wave as it progresses has more difficult troops to fight but what I'm asking is when comparing Reapers, Cerberus and Geth, how many of what troops are being sent depending on who your playing and what wave.

little update, I understand this question is incredibly difficult to get a decent answer for so i started a little research of my own. Havent tried gold yet but for silver i have done a Reaper and Cerberus match and on Wave 9 i see about 4 atlases and about 6 phantoms against cerberus and against the Reapers i tend to see 2 Banshees and 4 Brutes and 4 Ravangers. Trying to get how they decided what was equivalent to what.

I have a spreadsheet showing this here. Screenshots are below. 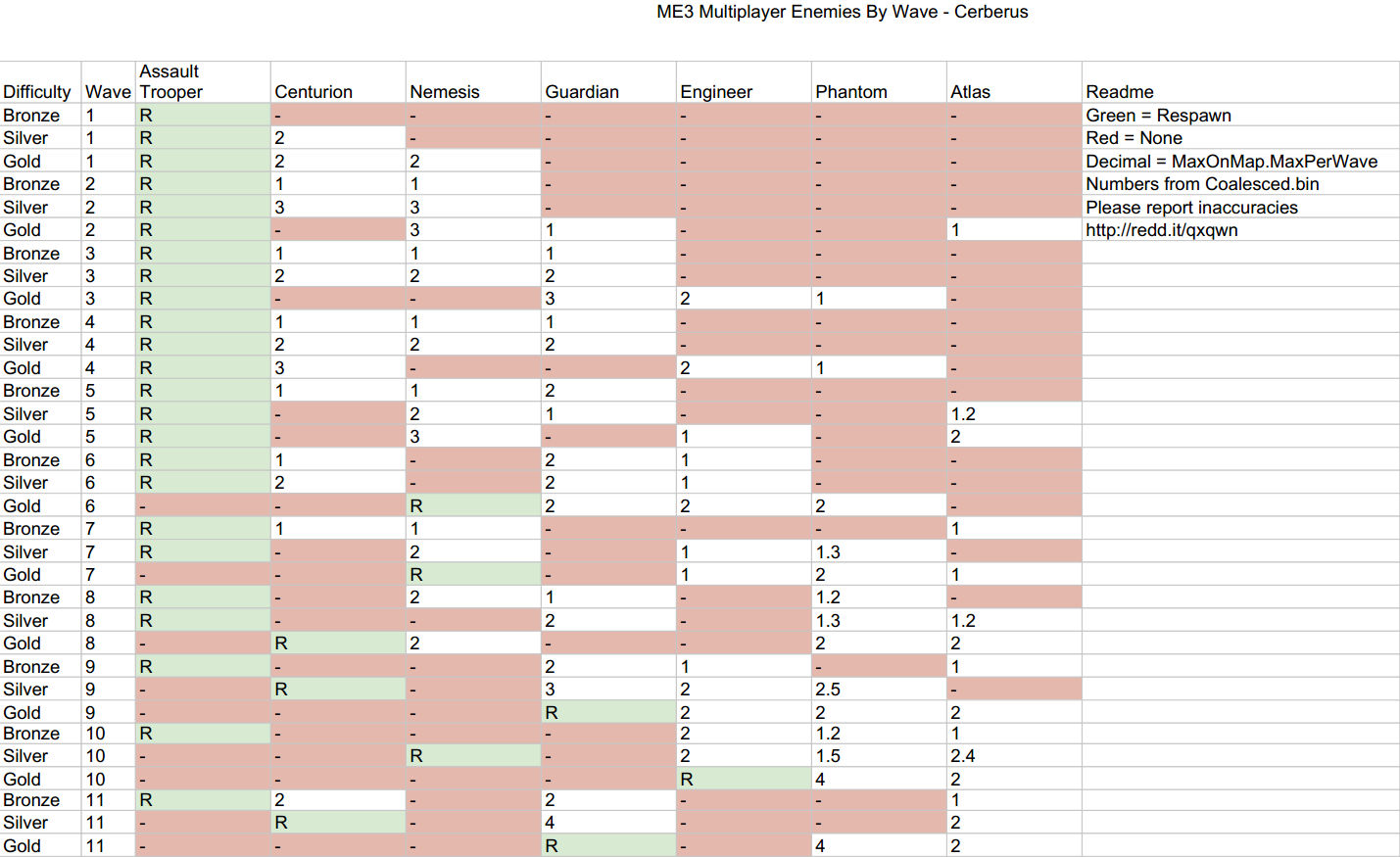 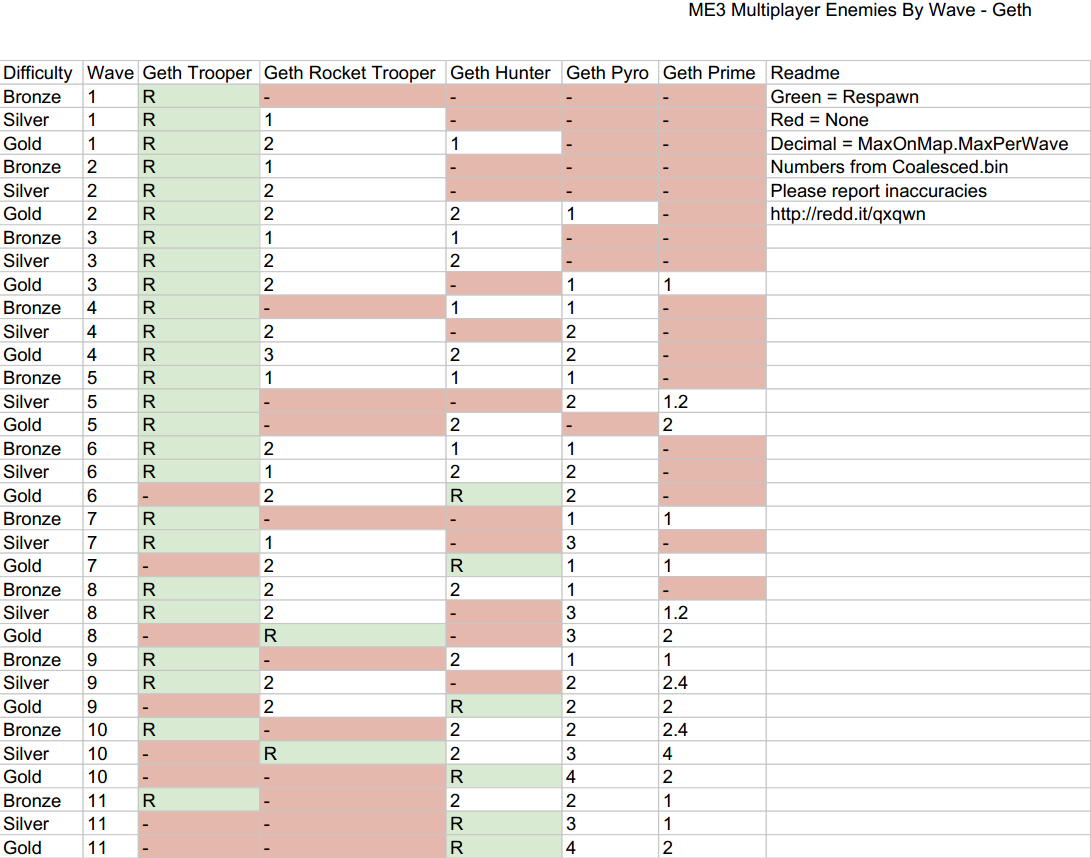 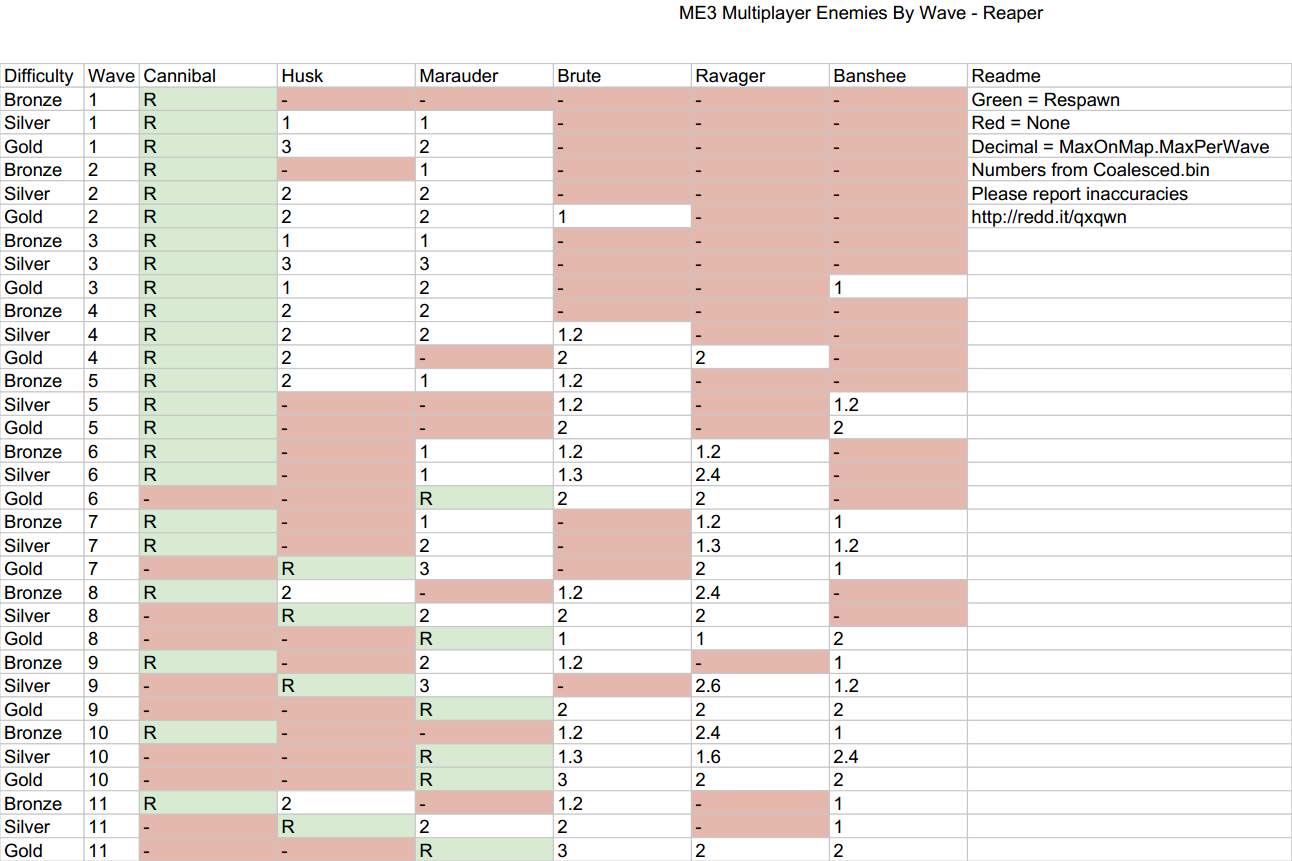 The geth troops have much less variety to throw at you, so in Silver I've seen that they simply throw more enemies at you as opposed to Bronze.

With the Reapers, they scale up the speed at which you start to get different troops. On bronze, I usually see Marauders at wave 2, Brutes at wave 4, few Ravagers at wave 6, and Banshee's start around wave 7 or 8. But on silver, I see those numbers jump back at least a wave or two, and then they double the number on screen. Bronze, I will see one brute before wave 6, then two after that. On silver, those numbers are basically doubled. I do see a reduction in Cannibal's, though, so maybe it offsets the numbers and increases the troop strength.

Cerberus was the same way with me on Silver. About the same number of guys, but double the amount of harder ones. I was seeing Phantoms at about wave 6 where on Bronze, I was seeing them around wave 8.

I'll try to pay attention next time I get into multiplayer and see if I can count the number of troops I kill to give you a better read-out.

9
Which weapons are useful against armored targets?
5
Do I need to clear out all the Reaper code in Rannoch: Geth Fighter Squadrons?
9
How can I effectively play a Sentinel in multiplayer?
2
Is a Melee spec character viable in Silver/Gold difficulty?
4
How can I use shotguns effectively in multiplayer?
2
What attacks can I block with the Paladin's Omni-Shield without taking damage?
5
How can you destroy an Atlas with a rifle within 1 second?