Who is the Illusive Man?

As a new player of Mass Effect 3, having not played the previous games, I'm rather confused by the appearance of 'The Illusive Man' in an early cutscene. He's been mentioned quite a bit in dialog since then, too. Clearly he is quite integral to the plot, but Mass Effect 3 doesn't give him any introduction, who is he?

The Illusive Man is the leader of Cerberus. He is a shadowy figure that few people meet in person. In Mass Effect 2, he "recruited" Shepard and gave him/her the tools needed to investigate the Collectors.

For instance, the version of the Normandy you control in ME3 is Cerberus-built at the Illusive Man's direction, and Shepard has certain implants that were manufactured by Cerberus as well. Some of the people you'll meet in ME3 are active/former employees of the Illusive Man. Miranda in particular was a key Cerberus operative/Illusive Man informant during the events of ME2.

However, he and Shepard parted ways at the end of ME2. Depending on your actions in that game, he can be more or less angry by the conclusion of ME2, but it seems that no matter what you do, the Illusive Man and Cerberus will be your adversary in ME3.

You could classify him as an "evil genius" - he's got good ideas and wants to ensure the survival of humanity, although his methods are ethically questionable. He doesn't trust other races, and is actively hostile towards them at times. As Shepard's goal is to unify the Council races against the Reapers, he/she is frequently at odds with the Illusive Man's methodology and tactics.

His tendencies to encourage brutal experimentation on living creatures, his desire to control, engineer and evolve humanity into the dominant race in the galaxy, and his rampant xenophobia draw strong parallels to other historical tyrants. It's arguable that he represents as real a threat to the galaxy as the Reapers do.

Typically he is seen sitting in a chair in a large room, surrounded by holographic displays. He frequently smokes, and has bright blue eyes. His appearance is modeled after Martin Sheen, who provides his voice. His backstory is left mysterious in the games, but has been expanded upon in other literature. The comic series Mass Effect: Evolution contains a good portion of his backstory.

Also, don't confuse "Illusive" with "Elusive" - it's arguable he's both, but I think many people think of the latter term when they think of his name.

The Illusive Man is the elusive, secretive, and well informed leader of Cerberus. The Illusive Man's real name and his life before Cerberus are not revealed during the games, but is covered in the comic books as described in this answer (thanks @FallenAngelEyes).

He is responsible for Cerberus' goals of promoting mankind and disdain for alien races, illustrated in ME3 by the discovery of the Alien Medi-gel "failure".

He is also working to bring the Reapers under mankind's (his) control, rather than destroying them, viewing their superior technology as a way to move humans ahead of the other alien races (presumably by force).

His goals set him naturally at odds with a paragon "we survive by working together" Shepard and even a renegade Shepard would have a hard time crossing the moral lines that the extremist Illusive Man is willing to tread. This makes him a major antagonist in this edition of the game.

As I noted in this answer it is rumoured that your decision at the end of ME2 will directly affect how hostile he is towards your character in this game. Other characters, notably Miranda, mention that Cerberus is not an organization you just walk away from. During the Cerberus Lab side quest you can also find evidence of a "suicide before capture" loyalty oaths within the organization.

He is described as having the best and worst traits of humanity rolled into one man.

He is voiced by and physically modelled after Martin Sheen and he strongly reminds me of the character "The Smoking Man" from the X-Files (not just because of the cigarettes). 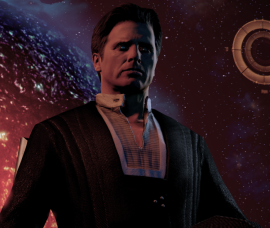 15
What effect does the ending of Mass Effect 2 have on Mass Effect 3?
7
Do the Illusive Man's eyes mean anything?

1
Who wants the banner of the first regimen?
19
Who are the numerous that died?
7
Do the Illusive Man's eyes mean anything?
1
Who is the man in the ending?
1
Who is the con man that Bailey wants help deporting?
0
Where do I find the Inferno (Iron Man) armor?
4
Is it possible to charm/intimidate The Illusive Man on Mars with only an imported ME2 character?
1
Does the Extended Ending DLC contain the Synthesis Choice?