What's with this hologram?

On some of my weapons there's a little blue hologram on the side of them that's shaped like a bullet (I think) does this serve any purpose or is it purely cosmetic?

It sounds like you're referring to ammo powers. Warp and Disruptor ammo show as purple and blue holograms, while armor piercing and incendiary ammo show as yellow and red, respectively. Also, as Mr. Smooth said, Cryo ammo is light blue.

Even if you don't have an ammo power equipped, squadmates can give the rest of the squad their ammo power at 50% effectiveness, assuming you put points into that skill.

It indicates the currently selected ammunition power that's applied to that weapon, which you can change by selecting a new ammunition power from your Power Wheel. The different colours and icons represent the different types of ammunition powers - incendiary, disruptor, cryo, armour-piercing, and warp. The icons for the first three are displayed below:

As an example of an equipped power, the pistol in the following screenshot has the Incindiary Ammunition power activated, as you can see in the hotkey bar and on the weapon itself: 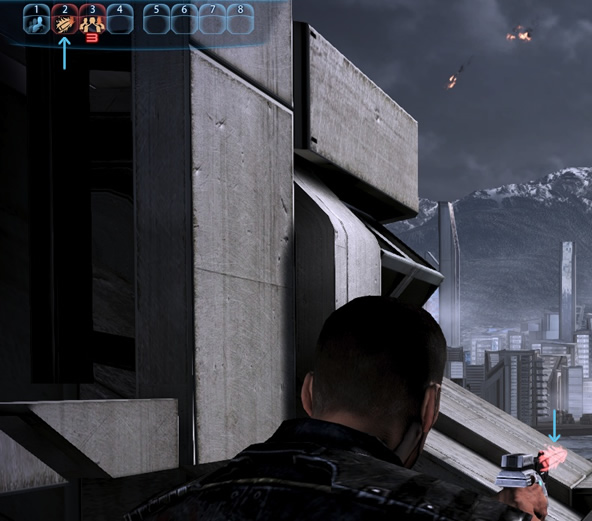 It's a good idea to do a quick check at the beginning of a mission to make sure the ammunition power you want active actually is, as they have a tendency to toggle off. Since the icon will always be displayed on the weapon when the power is active, it serves as a reminder for this purpose.

The powers are also applied for each weapon in your loadout separately, so don't forget to apply an ammunition power when switching weapons if desired.

3
What affects whether I get an elemental "hit" or proc?
4
Do any of the reaper troops count as synthetics against skills?
11
What does "weapons are easier to handle" mean?
10
Who's the little boy in Mass Effect 3?
0
Does Mass Effect 3 track single-player statistics?
2
How is Alliance Funding distributed?
2
What's the minimum number of current/former squadmates I can lose on a ME3 playthrough?
1
Can I see which weapon upgrades I own at any time?
5
Why do biotic combos seem to sometimes not explode?
0
How to remove that annoying ammo symbol on ammo powers?