What is the fastest firing rate for a submachine gun in Borderlands?

The double anarchy is by far the fastest firing SMG. Every 'shot' results in 4 bullets traveling to the target but expends only 2 rounds of ammo. I made this video to compare my double anarchy with a hellfire mentioned in Portali5t's answer. Note that even with a 82 round clip compared to 55, the double anarchy runs through the clip at a much faster rate.

The drawback to any gun with the anarchy mod is that its highly inaccurate, unless you find a good one with a high zooming scope.

And here are the comparative stats: 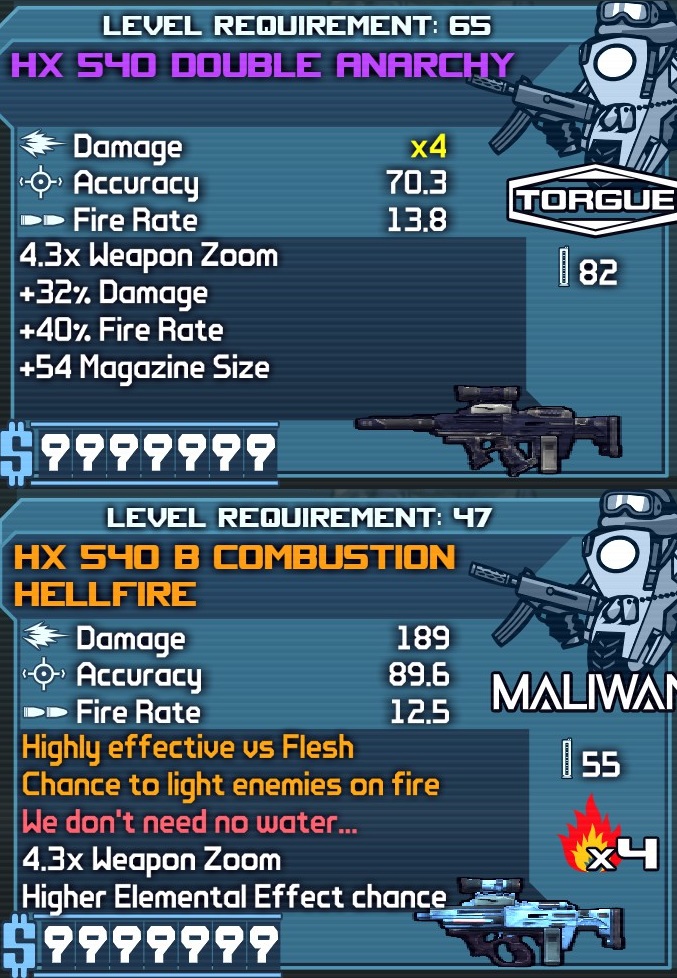 Well, there is a 2 part answer to this: The Gasher is the fastest firing SMG type, but it only fires in 3 round bursts, so it's not continuous. The fastest full auto SMG types are the Anarchy, Tsunami, Hellfire and Stinger. About the artifacts- that is a matter of personal opinion, personally I think that using explosive artifact with an SMG is effective due to the immediate damage-per-shot that results. Hope this helps!

To get it out of the way, artifacts are mutually exclusive from rate of fire (RoF). Artifacts only affect the element and damage of one's action skill.
spartacus's weapons are illegitimate (crafted outside of the confines of the in-game loot spawning system). There is no Anarchy above 35.0 accuracy. There is no Anarchy with a barrel5. spartacus's non-elemental Anarchy has the stats of a Steel Stinger (Torgue). Anarchies are NEVER elemental. Hellfires can never shoot more than one bullet simultaneously.

The fastest, sustainably firing sub-machine gun (SMG gun is redundant) is Anarchy. As Portali5t pointed out, while Gashers may have the highest listed RoF, Gashers are burst fire only. Anarchies are purple or blue only, and are one of the main reasons why I say, the best weapons are purple and up. The only other weapon type that can compare is The Chopper. In fact, a top tier The Chopper outdoes Anarchies in DPS, but it's not practical for general play.

Manufacturer: The manufacturers who make Anarchies are: Tediore, Torgue, and Dahl. Whassa difference? Tediore has fast reload speeds in exchange for damage. Torgue has high damage in exchange for slow reload speeds. Dahl is supposed to be a balance, but reloads still feel slow. I have yet to try a stockless one, if possible.

Choice: Know how they differ and decide which attributes that you'll value above others. For example, I prefer sightless, high accuracy, and fast reload speed. Other stats are a given, like damage, RoF, and magazine size. The Part Spotters Guide provides a handy table but only describes SMG accessories and barrels. Here's a description of the remaining parts.

And here are more from my personal collection which differ from those: 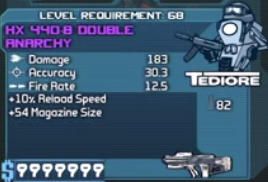 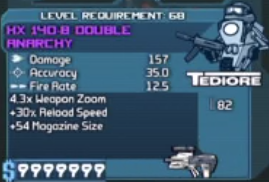 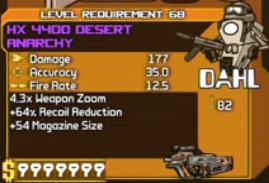 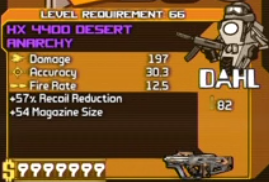 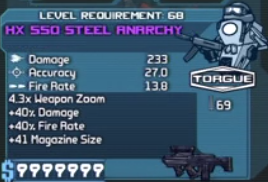 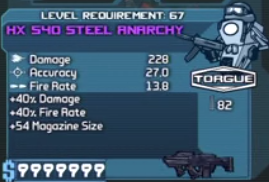 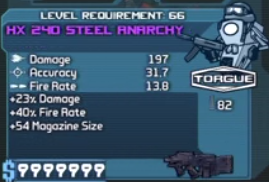