Do any on hit effects from any champion abilities or items get affected by Spell Vamp?

I always wonder how early I should get a Will of the Ancients over Hextech Revolver. How much it will it affect the rest of my team?

So I think that I'm seeing two real questions here:

The first question is a bit of an odd case, because it really depends on what you mean.

Some abilities, such as Gangplank's or Ezreal's Q are treated exactly like auto-attacks. These trigger on-hit items like Black Cleaver, as well as trigger Life Steal and other effects (depending on the champion).

The second kind of attacks are "on-next-hit", which modify the champion's next attack and reset the auto-attack timer. These are abilities like Nasus' Siphoning Strike, Blitzcrank's Power Fist, and Garen's Decisive Strike. These also trigger Life Steal and not Spell Vamp.

However, to confuse things, there are also "On-Next-Hit" Abilities that trigger spell vamp, such as Poppy's Devastating Blow, and Mordekaiser's Mace of Spades. 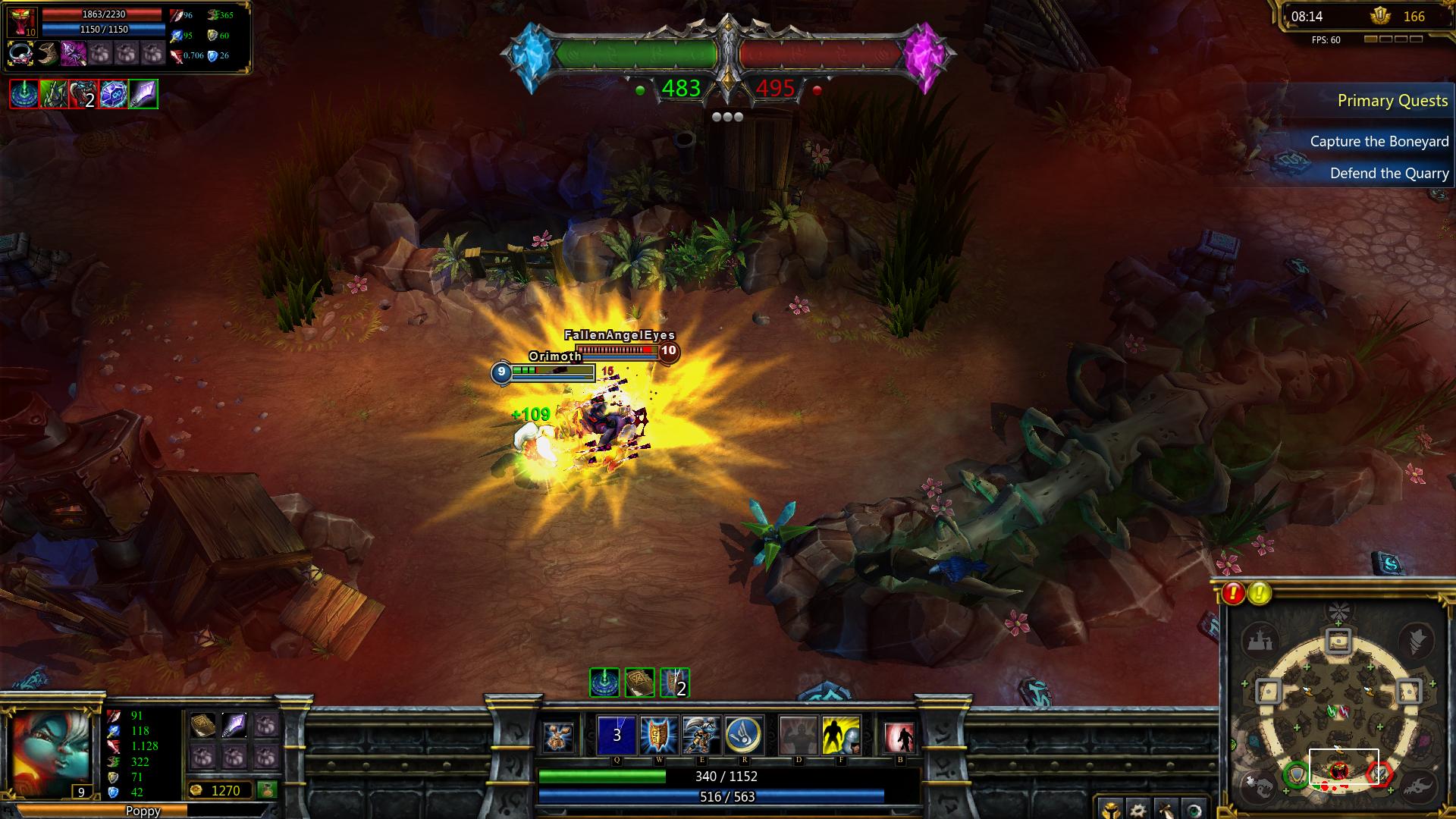 Note that Poppy only has spell vamp in this picture. The 15 damage that is visible is from Malady's proc, which was triggered by Devastating Blow.

The only difference between the two types of abilities is that one adds a bonus to your auto-attack, and the other one replaces your auto-attack. The easiest way to test this is to use the ability against a tower. Since towers are (essentially) immune to abilities, if you use it against a tower, and it does not consume the charge of the ability, it uses spell vamp. If you do manage to deal bonus damage to the tower, it uses life steal.

In general, any given ability onlys benefit from Life Steal or Spell Vamp, not both.

So, should you rush a Will of the Ancients? It depends entirely on what champions you have on your team.

As to your second question, the answer is much simpler: Item's with on-hit damage effects, such as Wit's End, Madred's Razor (and derivatives), or Malady, never proc Spell Vamp.

Deathfire Grasp or Hextech Gunblade, items with direct activations, however, will.

Activated items are effected by spell vamp. This includes things like Hextech Gunblade, Deathfire Grasp, and even Smite.

General rules were covered in other answers, though there are some exceptions. Kayle's Righterous Fury (E) is one of those on-hit abilities which do proc spellvamp, for example.

As per LOL Wiki. I have no full list of such exceptions as of yet.

3
If Spell Vamp affects almost every single ability, why do only AP mages buy it?

12
Spell vamp / Life steal and AD scaling abilities
5
Does Spell Vamp affect magic damage procs from items?
4
How to sustain with Fizz
2
Which component of the Hextech Gunblade do I build first on Akali?
5
What item is more preferable as Katarina: Hextech Gunblade or Will of the Ancients?
2
Are damage over time effects affected by spell vamp?
4
Is it good to have a mix of champs that are strong either early or late game?
6
Spell vamp - unique?
3
Does Hextech Gunblade heal passive stack with that of Will of the Ancients?