As a jungler, where should I be warding?

I like to play junglers, and I was wondering where should I be warding mainly? I know of places like Dragon, Baron, the river in general, but are there other places? Like warding enemy buff camps? Entrance's to my own jungle?

Also what kind of wards should I be using? Such as pink around baron and dragon or just normal wards and leave it to my teammates to handle?

With a team that will work with you, the best warding strategy ends up looking something like this:

If you search, you'll find some in-depth maps that tell you about additional spots you can ward that will be helpful. In general, though, you should get used to at least warding the buff jungle mobs and the dragon/baron as the jungler. Here's a simple map (which I stole from Mobafire) that illustrates a simple warding strategy: 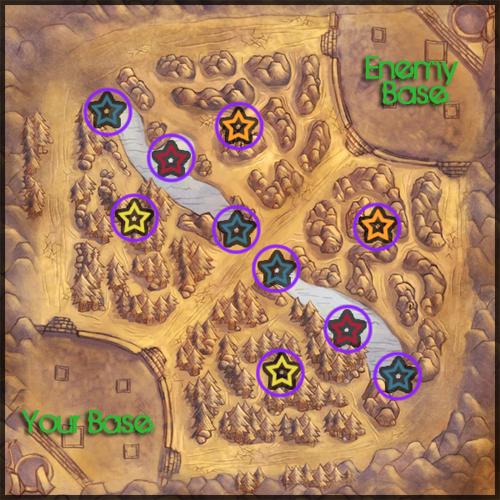 The areas the jungler would ward are the ones marked with red, orange, and yellow stars. An aggressive jungler will ward both yellow and orange so they can protect their buffs and either steal their opponents buffs or gank the opposing jungler when he goes for his own buffs.

As for types of wards, you'll default to the green (75 gold) wards. Purchasing the pink (125 gold) wards is typically reserved for warding baron and dragon since you'll likely be able to uncover a ward and kill it, thus removing map awareness from an enemy.

In addition, if you see an enemy place a ward in a place you'd usually place a ward and you're going to ward the area within 3 minutes (the duration of wards), do it with a pink ward instead of a green ward. You'll be able to kill theirs (which will get you 25 gold, thus making your end cost 100 gold) and you'll make things more difficult for your opponent.

9
Counter jungling, how to do it, is it worth it?
5
How do you finish a stalemating game?
1
When to buy an Oracle?
2
What are gank paths for toplane?
6
When should the jungler give mid blue buff?
2
When is the earliest Nunu can solo Dragon or duo Baron?
11
As a jungler when should I push the lane after a gank?
1
Amount of warding
12
What are support duties in LoL compared to DotA?