I don't get how the ladder system in StarCraft 2 works. I mean, I understand that I am placed in a ladder position according to my rank, but how do we start a 3v3 ladder game? There seems to be no option for that.

You cannot start a 3v3 or 4v4 while you are still in practice league (but you can still play in one!).

Either have someone else create (right-click their portrait and choose 'set as party leader'), or press the "skip" button to remove yourself from the practice league (once removed you cannot rejoin it).

You are ranked separately in your 3v3 from your ranking in 1v1. What's more if you have a full team (which in 3v3 is a party of 3) then that ranking is separate from all others.

However, if you have a less than full team, your ranking will be 3s Random (which means 3v3 with at least 1 member being random), and is separate from any full team ranking.

For example you can have:

All of these ranks are seperate, but if I play a 3s game with just McKay and I that contributes to my 3 Random ranking.

To start a match in 3v3 by yourself you would would select the 3v3 button on the multiplayer screen (here is an image I'll find a better one when I get home): 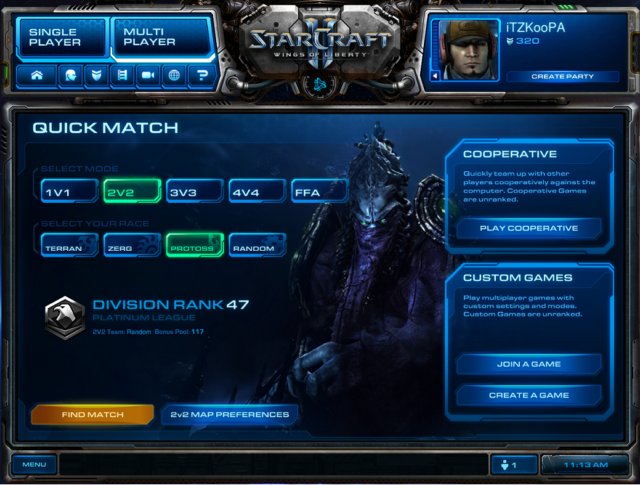 5
How do ladders work in StarCraft 2?

2
How do I start a Single Player/Multi Player game with a custom map in Starcraft II?
15
How do team tactics differ from 1v1 tactics in Starcraft II?
17
What's the proper way to deal with someone who Team Kills and harasses you constantly in Starcraft 2?
11
How to effectively transfer to midgame tech in Starcraft 2?
4
StarCraft2: ladder reset - does it reset amount of games played?
3
Getting started with StarCraft II
9
Are there build orders for 2v2 that benefit trading minerals/gas on a specific time in Starcraft 2?
13
How can I play vs A.I. on a set difficulty on a random map?
1
How do I install StarCraft 2: Legacy of the Void through the Blizzard client?