The Aspect of Peryite came out of nowhere and insisted on talking with my character.. forever - How do I stop him?

I experienced a gameplay-killing and savegame persistent bug, where the 'Aspect of Peryite' initiates a conversation and will initiate again after finishing or if you tabbed out of it. My last savegame was somewhere in Windhelm (not in an indoor location), when I noticed this bug.

The conversation that he insists on talking about is his daedric quest, The Only Cure. This is the last conversation he gives you before giving you the quest reward, and letting you go. Even if you 'finish' the conversation, he'll initiate another conversation a second or two later. Going to another indoor location, will not stop Peryite, as he will initiate the same conversation again.

I have already finished the quest, 'The Only Cure', months ago (both real-world time and game-time). This bug only happened in the savegame of my oldest character (Level 59) who has finished that quest. I have a Level 20+ and 30+ character - but with the same set of mods, the Aspect of Peryite doesn't haunt them.

A possible cause is due to a removed mod. I tried reinstalling all mods that might have caused this, but the bug persists (I might have forgotten what that mod was or have deleted that mod - either way, I can't 'restore' that mod). I tried removing all mods and then loading older savegames (which are in different locations other than Windhelm), but to my dismay, the Aspect of Peryite is still there, haunting me forever.

A possible fix I can think of is to use the 'disable' command on the Aspect of Peryite. However, I can't target the Aspect of Peryite (he's invisible - although in the related quest, he is not [might be because the character was on hallucinogens]) and I don't know his RefID (tried UESP and TES Wiki, but it isn't there). I tried blindly shooting the 'disable' command on whatever my cursor targets, but Peryite can't be hit (I mostly ended up disabling walls and stuff). I tried the 'help' console command, but I can't find the right RefID.

Anyone know any solutions or troubleshooting methods? Or can anyone tell me the Aspect of Peryite's RefID or BaseID, so I could disable him forever thru console commands? What about other console commands or mods that will fix this? (I already tried 'disable' and 'setstage' - to no avail.)

Screenshot of the Aspect of Peryite trying to initiate conversation in Windhelm: 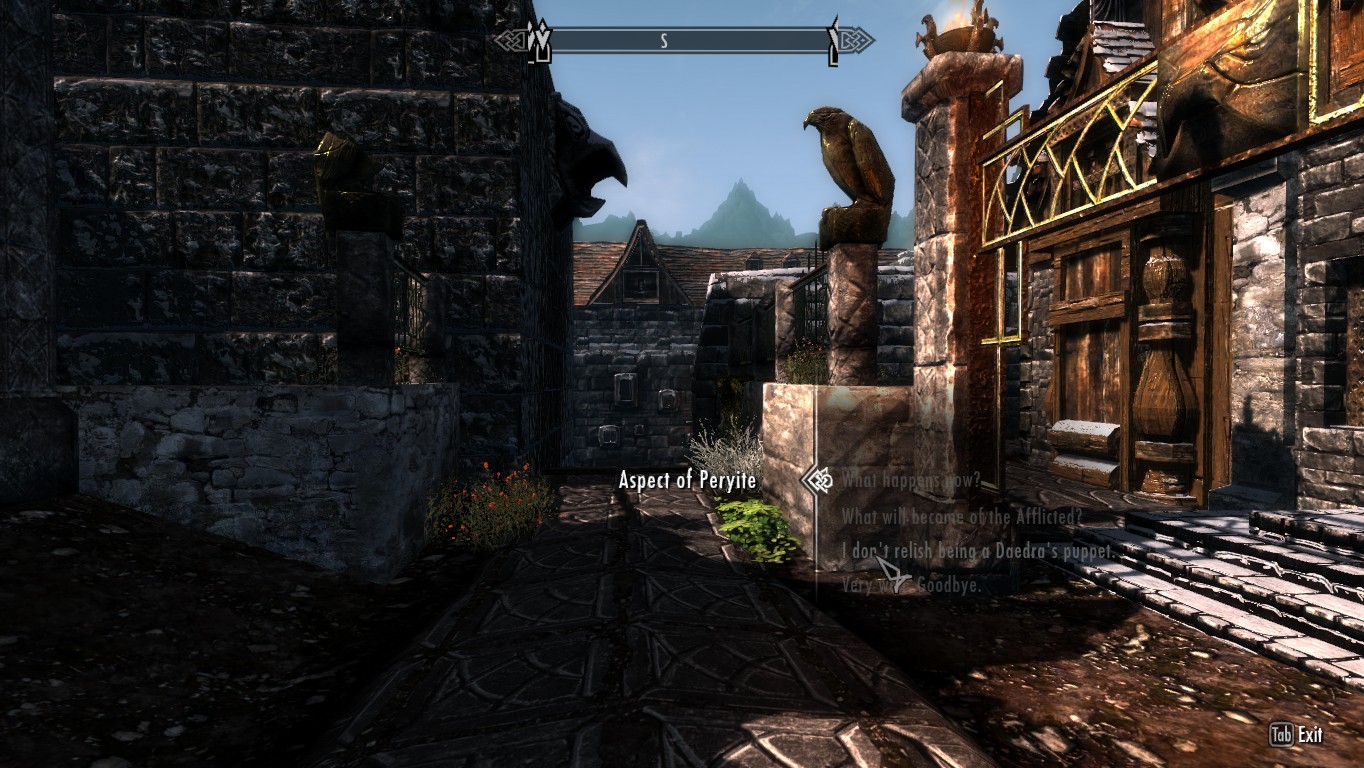 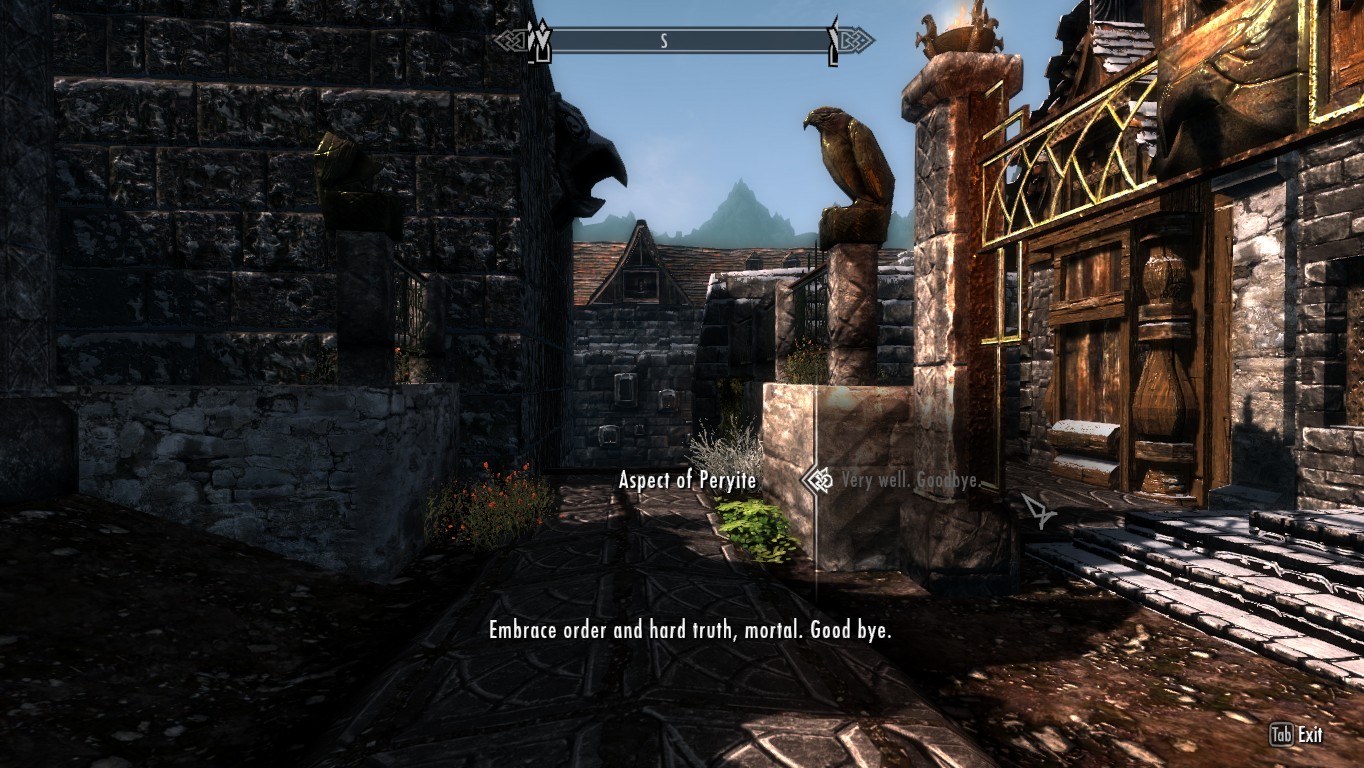 (It's basically these two screenshots repeating over and over again.)

My list of mods (.ESP filenames from BOSS' modlist.txt):
http://tinypaste.com/458eef93

I use BOSS and Wrye Bash (AKA Wrye Smash). I still use Skyrim v1.4.21.0.4 as I am still waiting for BOSS and Wrye Bash to be updated to support the new text-file based load ordering scheme, before updating.
Edit: I am now using Skyrim version 1.5.26.0.5 and the issue still persists.

There is no mention of this bug on the list of bug fixes in the official patch updates.

This bug has been previously reported here:
http://forums.bethsoft.com/topic/1355973-aspect-of-peryite-dialogue-spam-loop-poss-spoilers/

I've completed The Only Cure quest long time ago. Lately, in the wilderness, upon loading a saved game, the Aspect of Peryite dialogue appeared and started to spam me (with the dialogue that supposed to be in the end of the quest). The camera angle is limited, so I can turn from left to right, but cannot turn around. If I choose dialogue option or Tab out of conversation it opens again, usually immediately, sometimes after two or three seconds. If I try to talk to someone else, the Peryite dialogue takes over no matter how fast I am.

and here: http://www.loverslab.com/showthread.php?tid=6368 (some forum user avatars are NSFW)

A strange bug has struck me that randomly engages dialouge with peryite out of nowhere after deactivating a random mod. installing the mod again seems to freeze the problem but so does quest advancement and receiving items.

(about the Aspect of Peryite) Im in Windhelm. he talked to me and my game froze.
...
No it is not just sound, the subtitle Aspect of Peryite appears.
...
I was in Jorrvaskr when I saved my game. When I reload, it says 'aspect of peryite' on the screen. I can see Companions walking around , my mouse moves but nothing else works. I saved right in front of the door to skyrim, But can't open it, I can't use 'Tab", Esc doesn't work either . I have to Ctrl, Alt, Del and then quickly press the Windows key to end the game...

Got the same and horrible problem, since steam's patch 1.5. My main lvl45 character finished the quest a long time ago (around the lvl25) but the AoP still talk to me.

Can't find the RefID of him, neither a way to un-complete the quest, nor something to delete the voice. If i launch a "resetquest DA13" the AoP won't talk to me anymore, but no NPC either.

The only way i find to be able to speak with NPC et shut the mouth of AoP, is to do in console : "setstage DA13 0". Unfortunately, the screen sparkle like the beginning of the quest (under drugs effects). Can't find a way to disable (in console mode) this effect....

I tried the commands posted by this user too and also got more bugs. Bugs I notice: NPCs won't respond properly to conversation (not reply to you when you choose a certain conversation path - leaving you stuck), merchants won't open the buy/sell window, horses can't be ridden, and other interaction issues.

I've tried the bugged saved game file I initially posted in my question with the current latest versions of the official patch, Unofficial Skyrim Patch (USKP) and Skyrim Script Extender (SKSE), and the saved game is now Aspect of Peryite-free.

I've configured SKSE to use its ClearInvalidRegistrations console command on every saved game load, which removes invalid scripts left running by uninstalled mods. This feature was introduced in v1.6.7 of SKSE:

This prevents orphaned OnUpdate() events and the resulting bloated/broken saves when removing certain mods. When applied to an already bloated save, it will stop growing further and instead shrink over time as the game processes all queued events. This may take hours depending on the amount of bloat.

To execute automatically after each reload, add this to \Data\SKSE\skse.ini:

According* to a developer of the Unofficial Skyrim Patch (USKP), the underlying cause is because DA13 ('The Only Cure' quest) is never stopped.

A possible fix* for this:

In the meantime, load an affected save, then type stopquest DA13 into the console. That ought to put an end to that. Plus it’ll free up some unnecessarily leftover alias memory.

BTW, don’t use the console command on a save not bothered by it. Even though it may appear benign, console commands can have negative consequences you don’t know about.

If this doesn't work or if you experience issues like: NPCs not responding properly to conversation (not reply to you when you choose a certain conversation path - leaving you stuck), merchants not opening the buy/sell window, horses that can't be ridden, and other interaction issues, then the save game is most likely corrupted. Try the SKSE ClearInvalidRegistrations console command fix I've posted above, instead.

To prevent this from happening in the PC, get the latest version of the Unofficial Skyrim Patch. This has been fixed since version 1.1 of the USKP:

"The Only Cure" (DA13) was never stopped which would lead to the Aspect of Peryite randomly initiating conversation and being unable to exit.

You could try killing him.

You can type "setessential (base ID) 0" in the console to make a NPC that is immortal killable. You can look up the base ID of your specific NPC on the skyrim wiki. Then you just click on the npc and type kill.

I have been looking for a bug fix for a couple of days now. I found out that if you teleport to COC QASMOKE, that command will bring you to the developer's testing cells. It will bring up a list of statements, chose the last one, it will then allow you to move again, but will quickly stop you and make you talk to him again. So after it lets you free, pull up the command prompt again and use SetStage DA13 100 to complete the quest. Then teleport back to wherever, I used COC RIVERWOOD.

I got the same problem, but I was able to fix it by reinstalling the mod "arrows stick", available on the skyrim workshop. You should try it, too! Hope this will help!

9
How to reopen the Join the Stormcloaks quest?
2
How to reset base attributes Skyrim
4
Can't get in to dark brotherhood
23
How do I unadopt my children? (preferably without killing them)
1
Skyrim Corrupt save
1
Is there a way to verify which Unusual Gems that I already have?
7
Problems with Sofia for Skyrim
6
Stuck in the Night Mother's coffing during "Death Incarnate"
4
Skyrim Battle for Windhelm - Not Starting
2
Error Containing Character Appearences And Dialogue