Why does Gandhi want to nuke me?

Different civilizations obviously have different priorities. For example, Gandhi always seems to rush nuke technology and the Mongols will most likely start invading and spread like mad. Are these variables public knowledge? Can you tell by who you are playing what strategy they will adopt during the game?

While searching for why Ghandi likes nukes I came upon the chart I had in mind when I was asking the question. (Click to embiggen) 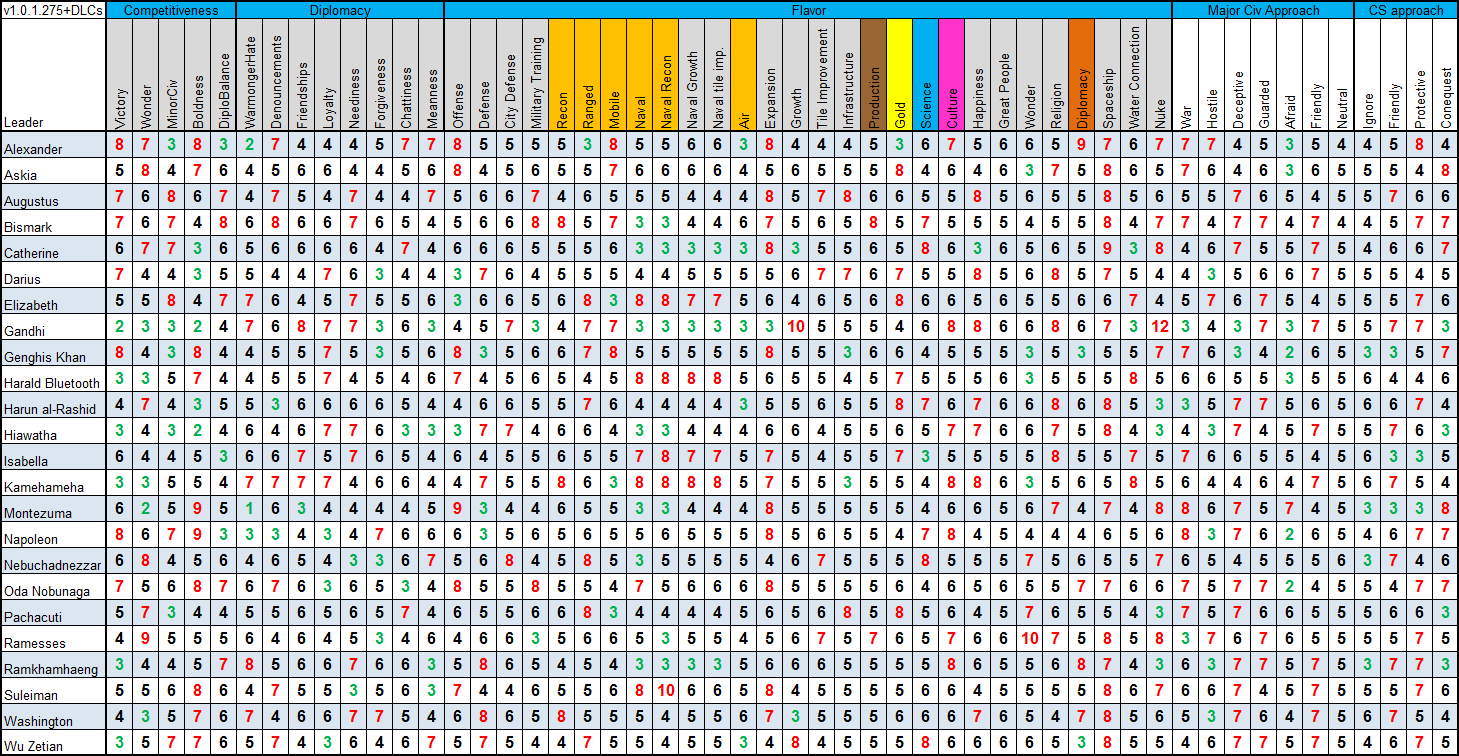 How to read the table

The listed AI values represent how likely an AI leader is to: - decide upon a way to win - react to what you and the other AIs do - react to wars, wonders being built, city-states etc. - build units, buildings, wonders and what type

The higher the value, the more likely the AI will act according to that strategy. For example, Alexander has a very high score in pursuing a diplomatic victory. He might not take that route, but its very likely. Oda Nobunaga has a very low "Warmonger hate" score. He is very unlikely to hate you if you're a warmonger.

There's still a die roll involved (and other factors like distance from your civ etc.) but these tables should give you a very solid base on which you can plan your game so it affects diplomacy in the way you want it to.

Victory: chance of getting the "they think we try to win in a similar fashion" diplomatic penalty

Wonder: chance of getting the "they covet wonders we built" diplomatic penalty

Minor civ: chance of getting the "we compete for same city-states'" diplomatic penalty Boldness: unknown

Diplobalance: unknown, possibly chance for getting diplomatic penalties for attacking or denouncing a nation you have declarations of friendship with.

Warmongerhate: chance of diplomatic penalties for wiping out AIs, city-states and starting wars

Denouncewillingness: chance of denouncement, based also on number of active penalties

DoFwillingness: chance of wanting declarations of friendship, based also on active bonuses

Loyalty: chance of them backstabbing someone (war or denouncement)

Neediness: how likely they are go ask for resources/gold with DoF active

Chattiness: how likely they open up the screen and comment.

Offense / defense / city-defense: how likely they are to invest into offensive/defensive units or city defenses (walls, castles, military bases).

Diplomacy, Spaceship: how likely they are to go for UN or Science victory

Nuke: how likely they are to build Manhattan project and to build & use nukes.

Neutral / friendly / guarded / hostile / afraid / war: How likely they are to decide upon having one of the stated attitudes, considering all other modifiers already in place

Deceptive: how likely their stated attitude does not reflect their real attitude. This is exactly the same model as was used in CIV4 (can declare at friendly, pleased, cautious) but otherwise does not affect current diplomacy (an AI that can declare war at Friendly and is thus deceptive, will still give you 300 gold for a luxury resource).

ignore / friendly / protective / conquest: how likely the AIs not to care / invest into (and do quests) / defend (civ X declares protection over CS Y) / conquer a city state.

This originated as a bug. In the early civ games, Ghandi was entirely peaceful, but once he adopted a peaceful government style like Democracy, something in the code looped and made his aggression go from 0 to 10, right about the time when nukes become available. The result is that Ghandi would suddenly become hyper-aggressive and build the most powerful army (read: Nukes) available. This rating in the newer games is deliberate as an in-joke to reference the original bug.

7
Why is Gandhi so aggresive?
4
What are the biases of the new civilizations?

7
Can my ranged unit melee attack if I want it to?
14
Nuke Tactics Civ 5
9
Civilization “doesn't want anything to do with me right now”?
4
Where can I drop a nuke?
1
Why does building something on a tile modifies the profit of it?
6
Why does the game tell me I am using too much iron?
3
Why does Civilization V does not give me the option to play multiplayer with internet?
5
Why does +xp shows when upgrading unit?