How do you dodge Sivir's boomerang ability?

Whenever I lane bot against a Sivir, she hits me every single time with her boomerang, making me have to go back to the base a lot. The people on my team always tell me to just dodge her ability, but how do you do this? Does it just come with practice, or is there an easy way to predict where and when that boomerang is gonna fly at you?

Sivir's Boomerang Blade can be an annoying harass, both at early level and late game. Unfortunately, it mostly takes practice to be able to avoid it. But there are a couple of tips that I think (hope) will be helpful in the long run.

Sivir's Boomerang Blade has a fairly large attack radius. Where you are in relation to where Sivir is when she launches the attack can make a fairly significant difference. The important thing to remember, though, is the further you are from her, the longer you have to react. Try to remain at a distance as much as possible when facing Sivir; especially in early game. One more important point on placement, the more minions between you and Sivir, the less damage you will receive if Boomerang Blade hits you. Each enemy it hits makes the damage to the next enemy lessen.

Unfortunately for you, sometimes dodging her initial attack ins't always enough. Her blade will track with her, if she moves up or down on the battlefield. You should always move in the opposite direction from Sivir. In the following image, consider your Champion to be X, while the colored arrows show the path of the blade upon return, in relation to Sivir's movement. 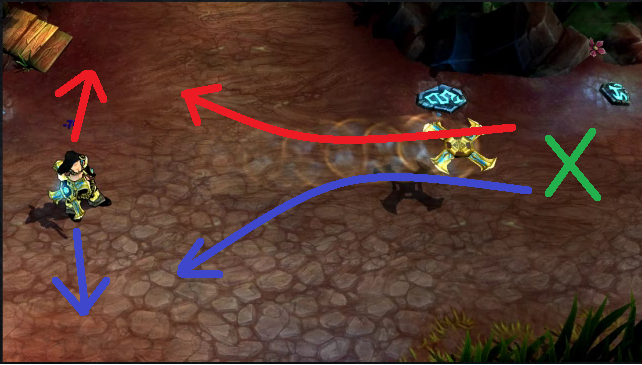 One last point worth mentioning is this: While the camera is zoomed in in that image, it's important to remember the high range of Boomerang Blade. It will extend to the far edge of the screenshot.

While it may sound like a simple answer, remember that Boomerang Blade is aptly named and will hit you on its return. Often, when enemy champs fire a projectile, your instinct is to head straight backwards to try to get out of range.

Unfortunately, with Boomerang Blade, it means you're just lining yourself up to get hit a second time. Try to learn how close you can safely get without getting hit, though this can be difficult given its long range.

If you can't dodge that first hit, after you've been hit by it once, try moving perpendicular to the path that Boomerang Blade was thrown in. This will at least give you a better chance of getting out of the way of its return, though skilled Sivir players will take advantage of the fact that they can alter Boomerang Blade's return path by moving, potentially leading the Blade back to you regardless. Keep that fact in mind and watch where Sivir moves to try to get a handle on which path the Blade will take heading back to her.

In addition, increasing your movespeed via early boots can also help get you out of the path quicker. If you know you're laning against a Sivir (or other champ with a long poke), try to prioritize your item purchases in order to get boots as soon as possible, especially if you're playing a champ with very low base movement speed. Earlier boots mean you can dodge more effectively, which means you can lane longer without having to go back for healing and buying health potions.

Try to stay back as far as possible while still keeping up your last hits and the occassional harrassment.

One tip that always works well with opponents who use skillshots is to start with a pair of boots or, if you cant start with them, get them as soon as possible. The extra movement speed is definitely noticeable against these sort of champions.

Start with boots if you can and either stay back to avoid it all together, or move side to side instead of back and worth to dodge it. it all comes down to his predictive skills and your reflexes.

Strafing is the best way to dodge the boomerang ability. The lesson of strafing is important to dodge any skillshots and will come in handy in all situations either going 1v1 against another champion or in a team fight.

Try to keep some minions between you and Sivir. Since every target after the first takes 20% less damage from Boomerang Blade, a good Sivir player will only use it when the only thing in its flight path is you.

By using your own minions as shields, you will either reduce the amount of damage you take or discourage your opponent from using Boomerang Blade at all.

:) Boots+3 pots to start, always great vs. skillshot champs. It keys off of AD as well, so go Ninja Tabi (Or something else with armor, like Wriggle's) if she's hitting that hard.

Try to expect the unexpected as we say. You can always stay a bit far and dodge when you see her shooting the boomerang. Also you can keep moving a lot in the lane.

In a more general sense, knowing the abilities of the champions you are facing against helps you in a matchup. For example, similar to Sivir, if you are against a Caitlyn, choosing to strafe up and down will make it harder for you to get hit by her Piltover Peacemaker. On the other hand, if you are against an Ashe, strafing up and down won't help as her Volley is a spread attack, so running away from Ashe is better to dodge that ability.

8
Does Sivir's ricochet trigger her passive?
9
Does Sivir's Boomerang Blade do damage on its return if you die after activation?
5
Choosing the right team composition, making decisions
3
Hybrid Damage Lux
5
Why do ADCs always go for damage over armor?
0
Positive/Neutral score, but keep losing
12
What are support duties in LoL compared to DotA?