What are Reaper Destroyers made out of?

Major spoilers about the nature of Reapers in Mass Effect below.

It's said that Reapers are made of and in the image of a specific species that's been harvested. They're supposed to be "nations", collections of specific species to preserve them, hence the Human Reaper at the end of Mass Effect 2. Harbinger was presumably made of some Insectoid species.

For reference, this is a Reaper Destroyer as presented in Mass Effect 3: 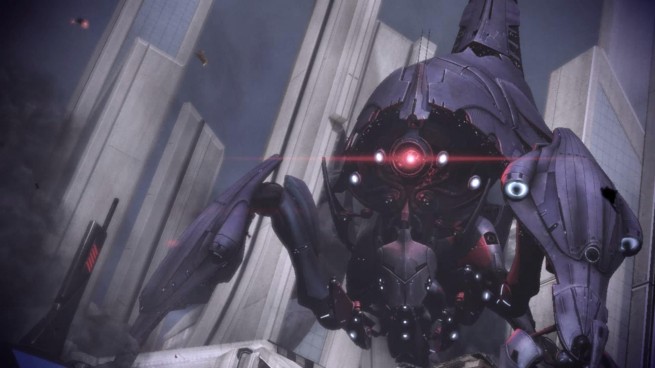 Is there any evidence throughout the series that suggests how Destroyers are built? They seem contrary to the normal construction of Reapers like the Human Reaper and the failed attempt at a Prothean Reaper.

Why are they similar?

Externally, reapers follow a set design (though the armada seen at the end of ME2 shows that there is room for some variation), but internally capital ships contain a core which is roughly in the image of the one species which is harvested to create capital ships.[1][2]

What are destroyers made of?

Whilst it is not definitely specified (as far as I can find) whether destroyers contain such a core (it could be inferred from [2] but that may just refer to the capital ships), the codex says that they are created from all the other species which are sufficiently advanced to be harvested (Remember that not all species are culled in the cycle - Javik references this many times in ME3) but not the chosen 'capital' race.[3]

CAPITAL SHIPS are Sovereign-class Reapers two kilometers in length. They typically target the dreadnoughts, defense installations, and industrial cities of organic civilizations. Experts believe the Reapers harvest a single species of organics during each cycle of extinction to create these massive ships. Some capital ships are capable of launching small drones equivalent to fighters.

The exterior of the Reapers does follow a similar pattern, an efficient design for the purpose they were created for. However each Reaper is created from a unique species, and as we saw at the end of Mass Effect 2, the core of each Reaper is designed in the likeness of that species.

DESTROYERS are 160 meters long and, in astounding numbers, make up the bulk of the Reaper fleet. They engage cruisers and other, smaller ships, as well as communications posts and enemy command centers. Research suggests destroyers are created from those species that are not harvested to make capital ships.

All Reapers look the same, regardless of the species they're built from.

Here's the thing: That Human Reaper you saw in ME2?

That's the core, the brains, the nervous system. It would've had the same exterior, betentacled shell of every other reaper we've seen upon completion however.

Straight from the lips of Mac Walters, lead writer for ME3:

The exterior of the Reapers does follow a similar pattern, an efficient design for the purpose they were created for. However each Reaper is created from a unique species, and as we saw at the end of Mass Effect 2, the core of each Reaper is designed in the likeness of that species.

7
Are Turians and Quarians related?
7
What happened with Ashley between ME2 and ME3?
6
What rank is “Primarch”?
17
What squad members romance together without Shepard?
9
What do I need to complete my Mass Effect Trilogy collection?
10
Are any important NPCs doomed to die, or immune from death?
2
If I date Liara in ME1, what will affect me if I want to date Tali in ME2 and 3?
5
What happens if I romance Kaidan as a male Shepard in ME1 by editing save file and import the save file to ME2 and ME3?
2
How long are the natural lifespans of the other aliens?