What kinds of things can be in poop and are the chances always the same?

So far, I have only found hearts and coins in poop. What else can be in there? Does it depend on where I find the poop?

Example: Larry Jr. leaves a lot of poop in his fetid wake. Do these poop piles have the same drop chance as poop piles found elsewhere? If not, are there any other instances of increased/decreased poop productivity? 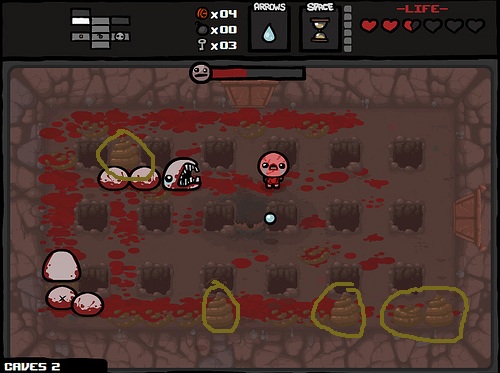 According to the Binding of Isaac Wikia:

Poop is a randomly generated item. The unlockable character ??? starts with an item that can generate poop. It randomly drops coins or hearts.

That said, I've made my way through the depths of Isaac's world more times than I care to count, and speaking from experience, have only ever seen Hearts (Regular and Soul), and Coins (pennies and nickels) drop from these piles of poo.

As for poop productivity, while I don't know the percentages, it doesn't seem like Larry Jr.'s poop has a higher chance of dropping anything. However it is a seemingly endless supply of poop. As long as you can stay alive, you can play in the poop all you want in hopes of farming some money or hearts.

One important thing to note, however, is the Lucky Foot. Unlocked by collecting 55 coins in one game, it will begin to appear randomly within the dungeon (treasure rooms, boss rooms, and Devil rooms). This little gem increases the likelihood of items dropping from those putrid little piles of poo.

15
Can I farm soul hearts from Larry Jr?

8
What are the choices presented by this evil statue?
5
What are the tradeoffs in using We Need to Go Deeper?
9
What is different between the pre-Mom levels and post-Mom levels?
8
What can you get from the Skull Game after Skatole?
6
Can I prevent unwanted items from appearing more than once in the same playthrough?
11
What are the white hearts?
2
Are the chances between the Portable Slots and the Slot Machine different?
3
What is the deal with this weird poop and white fly?
10
What are each of the challenges?
0
What are the lyrics to the Cathedral's theme song in TBoI?