How much damage do mecha knights do?

I've noticed that whenever I activate a mecha knight, it doesn't seem to do much besides distraction, though it makes a big show of performing a spinning sword attack. Enemies they attack never seem to die, just the mecha knights themselves.

How much damage do these guys really do?

Not much, at least in relation to the player.

To do this, I selected the Silkwing of Stratum 6. Stratum 6 is a good benchmark because it is the hardest tier in normal gameplay (not counting shadow lairs), and ideally the Mecha Knight will reach its maximum potential in this Stratum. Silkwings are a good benchmark because they don't really respond to Mecha Knights at all, so they're passive targets. To approximate the Silkwing's HP, I isolated it by killing the enemies it spawned with, and then hit it with several different weapon combinations to lower its HP as much as possible without killing it. Spiral Knights doesn't subtract "overkill" damage from your weapon's output, so killing blows aren't reliable for measuring HP. After several combinations, I found the Hit 1 values of the Combuster twice and Hail Driver once to get the Silkwing very near its killing blow. The Combuster was reliably putting out damage between 185-187 HP, and the Hail Driver consistently at 95 HP. The maximum damage without death I found was 374 -- my expectation is that the Silkwing's HP is between 375-385 HP.

Next up, we let a Mecha Knight loose on the Silkwing. Mecha Knights appear to use a blade from the Calibur family, and perform melee attacks similar to players -- they can perform single attacks, 3 attacks in succession, "spinning" double attacks, and a charge attack. 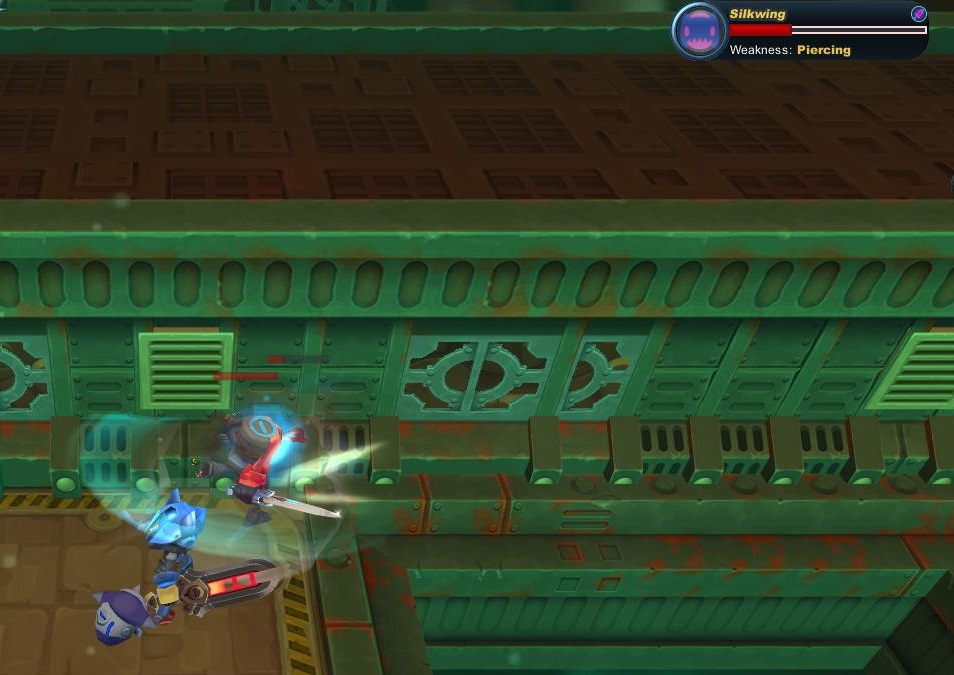 It took a long time for the Mecha Knight to kill the Silkwing. The Mecha Knight attacked it approximately 62 times before it died, and I'm not sure that each of those attacks were successful. However, if we assumed that they were, we could establish a range to reasonably answer this question. Something like this:

So the Mecha Knight, in Stratum 6, has a damage output between 6.05-6.29 HP. I do not know if Spiral Knights rounds these to integers. They could very well take it to nearest floor or ceiling, which would change the range to 6-7 HP in this case.

After analyzing these numbers, I think it is safe to stop attempting to calculate them with any more precision. This is because the conclusion I've drawn is that Mecha Knights have utterly abysmal damage output. Deployment of Mecha Knights seems much more successful when their purpose is to relieve the player of threat, or otherwise picking up aggro. They're not invulnerable, but the momentary distraction they provide is useful to retreat for a few moments to charge up an attack, use an item, or to attack from range. I've never had much success desperately releasing Mecha Knights to damage opponents, and this analysis shows why -- it does not seem to be their purpose.

Not the answer you're looking for? Browse other questions tagged spiral-knights or ask your own question.