What creatures and generic NPCs can be reanimated with each of the 'Conjuration - Reanimate' spells?

The 'Conjuration - Reanimate' spells you can get improve as you level up your Conjuration Skill:

Skyrim classifies creatures and NPCs into generic classes as enumerated on the pages below:

Within each of these classes, there is also a breakdown of more powerful types of those classes that are added as the player levels. So within the Bandit class, there is the initial Bandit, then the Bandit Outlaw, then the Bandit Thug, etc. From this information, it seems apparent that the weak, more powerful, and powerful descriptions may be related to the type within each creature or NPC class as the types themselves do not scale to the player's level with the exception of boss-types. The Reanimate spells' qualifications of power may relate to class as well.

...all leveled enemies are generated more like leveled creatures in Fallout. For example, Bandit NPCs are always a fixed level for their name (Bandits are level 1, Bandit Thugs are level 9, Bandit Highwaymen are level 14, etc). The player's level affects the range of possible bandit types generated within a bandit dungeon, and probably the frequency, but does not seem to affect the resulting stats except in a few rare cases. Lower variant bandits remain reasonably common even when more dangerous bandits are available.

So while I don't have a full answer to your question just yet, I do have some preliminary results.

I've been peeking around in the Skyrim Creation kit, looking at the spell effects for the five spells you list above. For instance: 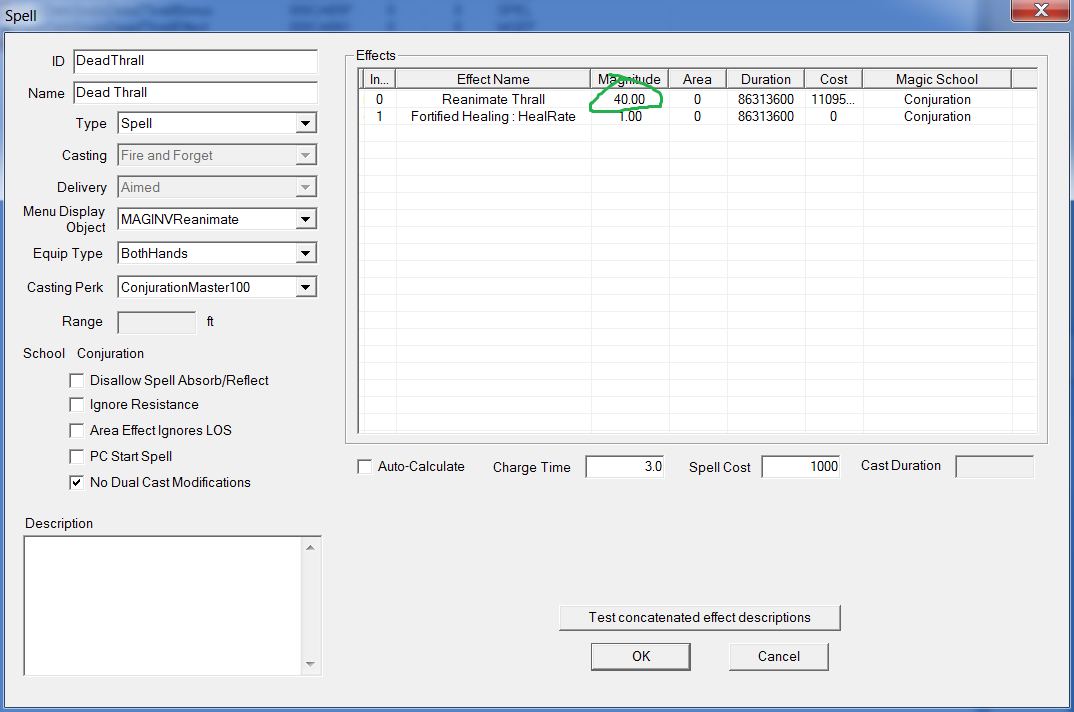 The highest level reanimate spell has a magnitude of 40.

This is similar to how the master level frenzy spell, Mayhem, is set up, though it's magnitude is 25. This becomes relevant as soon as we read the effect's description:

We've documented the frenzy effect over here already, so I think we can safely assume that if Reanimate works similarly (and there's no real reason it shouldn't), the magnitude of the spell effect correlates precisely with the maximum level corpse that can be raised.

Which gives us an obvious series for our curve.

Double-casting conjuration spells increases the duration, not the effect, so that won't help against higher level enemies, but the Necromage perk will.

As to what level are which creatures, the first thing to realize is that certain creatures (i.e., Dragons, Giants, and Dwemer Automatons) simply cannot be reanimated.

That said here's as good a list as I can manage. If you don't see an NPC on here, it's most likely because they can be found at multiple levels. Creatures are listed under the minimum required spell to reanimate them:

Too Powerful to Raise

Volkihar Vampire can be raised if you have the Necromage perk in the restoration tree raising the max level by 25% which only works on undead making you be able to raise vampires up to lvl 50 so you can raise a lvl 48 Volkihar Vampire but not a lvl 60 Nightlord Vampire.

11
What is the highest level affected by the frenzy effect?

4
What are the differences between Flames, Frost and Shock spells?
8
Why does dual-casting reanimate corpse turn zombie directly into ash
12
What is the difference between a Dremora summoned with the Conjuration spell and one summoned from the Sanguine Rose?
29
Drop Dead Dragon
6
Can NPCs kill dragons? How to avoid it?
2
What are the new spells and where can I find them?
10
How Does Making a Skill Legendary Affect Spells?
7
Light armor for more independent adventuring?
7
Can diseases affect NPCs and creatures in Skyrim?