What is the most efficient way to use TNT?

After months of curiosity I have finally caved (no pun intended) to trying out minecraft. I am currently trying to clear out a very large 25x25 area. I have built my first block of TNT and I'm ready to get down to buisness. I have read that enclosed in stone the explosion will create a 3x3x3 hole. However, what about not enclosed in stone? What is the proper hole size deep, and wide in order to maximize the blocks destroyed in a TNT blast? Assuming that all the sourrounding material is all basic stone.

Also possibly important to note: I don't care about any ore's destroyed in the process. I just want to make a very large dent in my project by blowing things up. Plus TNT is the manlier way to do it.

Let's do some experiments!

I am also going to ignore the possibility of encountering a vein of dirt or gravel, which is much easier to blast and results in much less predictability of the results due to irregular obscured shape.

That 3×3×3 cube fact is true, but only if the TNT is actually fully encased — which would be a waste of time since you would have to light the TNT and then plug the hole. The way I have used TNT to dig is to make a 3-deep hole and place TNT at the bottom of it (or drop lit TNT down from the top, which requires less careful cursor work). In addition to blowing out the cube, it will also take out nearly all of the fourth layer above (say, with one block remaining). I have found this to be a very convenient strategy.

Suppose we place a single TNT on a flat stone surface and ignite it. I did this and got a 7×1×7 hole where the outside was only partly exploded, leaving 12-15 blocks [3 trials].

How about the same as above but with the TNT inset into the ground by 1 block? That turns out to be the same as the first case without the blocks above, so it removes only 9+8 = 17 blocks.

Let's go higher. Placing a TNT on top of some leaves (blast resistance = 1) results in another 7×7 pattern, but with only 9 blocks left unexploded.

Another block higher and there are many more blocks remaining; I'll stop here for now and assume this direction isn't useful.

So, the on-the-surface configuration blasts more area, but surely it wastes all that blast going sideways and upward. Let's try setting off a TNT in the center of a 3×3×4 hole produced by the first method (supporting the TNT with a block of leaves).

A fourth centered blast, after clearing the irregularities, only scarred the walls a bit; I'm not going to bother working out the numbers.

In conclusion, based on the patterns I've tried, the most efficient pattern (in terms of blocks exploded per block of TNT) is three blasts at the same center point, starting with a 3-deep hole in the ground, manually smoothing off the walls between each step.

(However, these tests were conducted in creative mode, so I did not concern myself with safety (i.e. getting out of the hole). The temporary stairs required to exit after the second and third setups may affect the patterns; or you could use a water stream or drop lit TNT from a frame above.)

On the other hand, if you want to minimize manual effort while making a square hole, then I recommend using two blasts, as that has the lowest manual work percentage while still being quite efficient in TNT.

My experimental setup was a flat stone surface with a surrounding 11×11 obsidian ring to aid counting and provide a height reference in case I blew up all the surface. Shown here is the situation immediately after the fourth blast discussed above. 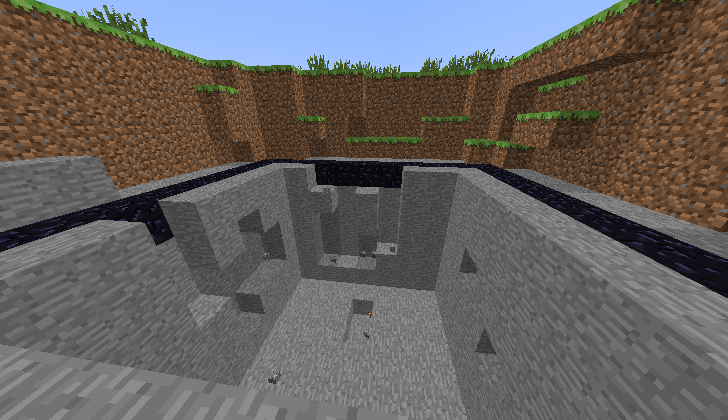 Also, thanks for asking this question! I have learned an improvement to my own blasting technique.

On this page, it says:

Thus, the explosion propagates farthest (7 blocks) through air, which has a blast resistance of zero.

Also: This wiki has a page for every kind of block, and on them, each block's blast resistance is listed below the picture of the block. Hope that helped!

27
Is a Creeper's blast radius affected by the surrounding material?