What's the back-story in Fez?

I've been trying to piece together the backstory of FEZ - this is where I'm up to...

There are 4 races in FEZ:

Firstly, according to a blackboard in a classroom in Gomez's village: 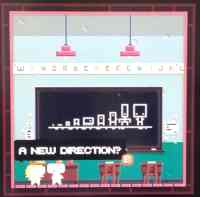 It looks like the long-heads and big-heads are ancestors of Gomez's people.

I think that the long-heads were primitive ancestors that lived purely in 2D: 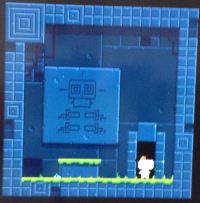 The big-heads are harder to figure out, and I think visiting them might involve some time travel. There are two big-head villages:

I think that these are the same village before and after a catastrophe: 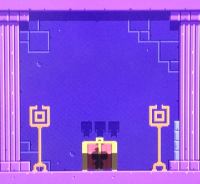 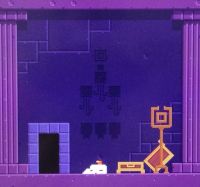 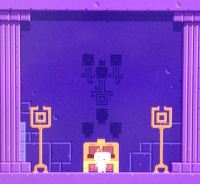 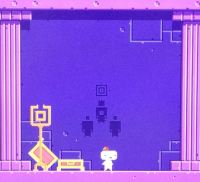 I think the visitors and the owls are related somehow, but I'm not sure how?

Were the visitors destroyed by the same catastrophe?

If I'm right about the time travel then Gomez is going back in time to complete the game, and it's possible that in doing so he causes the disaster that destroys the big-head village.

If I'm wrong then what is going on?

One of the coolest parts of playing Fez has been piecing together a story based purely on engravings and a smattering of owl and Dot sayings.

The only bit in the history you've outlined that I would take issue with is the bit where you say the big heads are ancestors to Gomez's people. And by big heads, I mean the ones running the successful stargate. I think the bigheads are the latest line in this string of creatures having heads large enough to contain information about the third dimension without shattering the hexahedron. They also all wear squares, or 2D cubes, on headbands almost as a religious or tribal identification.

I can't tell if the ruined city is in the past, or if it's more like ruins that the big heads discovered, or if it was a failed project that they relocated. There is some amount of time and space not acting as expected, beyond the established 3D gimmick, as when you enter the hut in the forest that exits in the mausoleum, or the underground place that is being rendered out of glitches.

Two tiny details that I thought were incredible: the tribal Gomezes live in 2 dimensional huts which they see with 1 dimensional eyes. They see in 2 dimensions because that's how many there are, while Gomez and the big heads have 2 eyes and can see in three dimensions, and the space squid have 3 eyes which presumably means they can see in four dimensions. This implies that the world was evolving as the creatures were.

Owls: first of all, this is a clear reference to the Twin Peaks series, the red drapes lodge around the graveyard levels is a place with which you travel into that world. This is also true in TP, where the lodge is a place inhabited by spirits, who can travel between planes. Owls play a prominent role, as a spiritual embodiment of evil and darkness. The killer BOB is seen transforming into it several times. Also, it is implied that they are extraterrestrial.

As for the Big heads story, at the starting sequence, the megahedron thinks you are actually of the ???, I think he returns every once in a while, and performs some sort of checkup with the big heads. In the translated sequence ( see youtube ) he says "whats with your head?" meaning he has mistaken Gomez for a big head ancestor. He then shatters, maybe gomez was not supposed to perform the checkup?

Totally in agreement; If you think about the "world tree" as a tesseract, then Gomez is really moving around in time as well as space, and you can piece together a rough history. After the fall of the classical, stargate-using age, it seems like they had to migrate to other 'worlds' and reinvent things (mechanical age, broken rainy world, death world?) and somehow Gomez' village is the end, a sort of sheltered pocket universe where the remainder of the population live (and evolved into their current form), but it's been so long, they forgot they lived in three dimensions. Maybe the big head = slightly larger brain, and by Gomez' time their brains have shrunk... :)

I have a related theory (spoiler)

that the time travel setup is also linked to the "tree rings" you can see on the ground in a New Game+; blocky pyramids appear in a few places. These possibly indicate there's a pyramid in time, as well. The center square is the same place in space, but you're in a different time level in each location.

I think the backstory of Fez goes like this:

The tall, 2-dimensional seeing men hunted and lived in caves (shown as big carved stones with windows). They knew how to draw, and they worshipped the owls. As time passed, they evolved into the big heads, who have their own alphabet and numeral system. The visitors came, and the first Fez greeted them. The visitors gave them the technology to make stargates and warp gates.

Because of this, the Fez became ruler of the big heads. However, when they tried to use their newly made stargate, something went wrong and it broke. Here, there are no more etchings, and it jumps to the modern city. I think that some of the big heads rebelled and went to a small island, and some went to another island. The original civilization went to the waterfall hub they made and went to the last door of the hub. They entered it and begun to rebuild their civilization, and now their hypercube symbol just became part of their "fashion sense." They discovered an artifact that sensed movement.

A stray big head became lost between worlds. He made Hypercube pillars in some places, and made a stone etching for people to see and rescue him. The big heads on the small island renounced their religion, alphabet and numeral system, and slowly became Gomez's ancestors. The other island's Long heads were mostly engineers of the king. Their knowledge on technology made them an advanced civilization, but a black hole engulfed them. Then Gomez was born, Gezzer got his Fez, and here they are now.

Here's what I personally think about the backstory of Fez:

2
What is the secret on the skull stage of Fez?
1
Fez crashing back to game library after a minute of play
0
Where is the "XYZ door" in Fez?
1
What are the FEZ tetris codes for the PC?
7
Why is the 32 cubes door broken in FEZ?
6
How do I lower the water even more?