How can I get the worst reputation possible?

As we all know our choices have some affect in Skyrim. Are there any quests in Skyrim that have choices that can impair or cripple the game? I'm looking for all possible ways to make Skyrim a bad land and make all quest related NPC characters look down upon me.

Are there any quests that give a choice that affect other things in Skyrim, and what are the major choices?

The following conditions will greatly impact on NPCs stance towards you.

Vampires are hated and feared by the general population and will be attacked on sight if their true nature is discovered.

Almost all NPCs will become hostile (exceptions include other werewolves, Maiq The Liar, Melka, members of the Dark Brotherhood, Paarthurnax, followers, housecarls, and members of the Thieves Guild [verification needed], but not your spouse, unless your spouse is one of these)

Note: You have to choose to be either a vampire or a werewolf.

Comitting any crime causes the Hold guards to attack you.

If your bounty is above 1000 gold, you may be met by a Bounty Collector.

There are consequences for killing a chicken. Even though the bounty is as low as 45, the townsfolk will kill the violator if they get the chance.

Sheathing the weapon has no effect on Hold Guards. You better run. 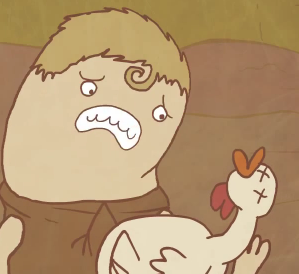 For some reason chickens are for Skyrim what cows are for indians. Not delicious but sacred.

2
Can I get Skyrim to remember my custom keybindings?
15
Is it possible to prevent the mouse cursor from highlighting menu items?
31
Playing Skyrim regret-free
4
Do Delvin and Vex's Jobs Hinder Any Further Quests in Windhelm?
6
What sets of major collectable items are there in Skyrim?
2
How can I start the Thieves Guild quests if Brynolf is hiding from me?
4
New Allegiances: Valindor not anywhere to be found?