I can't find this option in the interface; but am wondering if maybe behind the scenes the data is available somewhere, or in some hidden corner of the UI.

I was curious how much time I've spent in the Mass Effect universe. So I fired up Steam and checked the hours played in 1 and 2. Then I jumped to Origin to see how long I spent in 3 - but it doesn't seem to show this information.

Is it hidden there somewhere?

It appears that Electronic Arts has added to Origin a play time tracker. As can been seen in the screen shots below this can be found in the library when mousing over a game, or when in the game details screen. 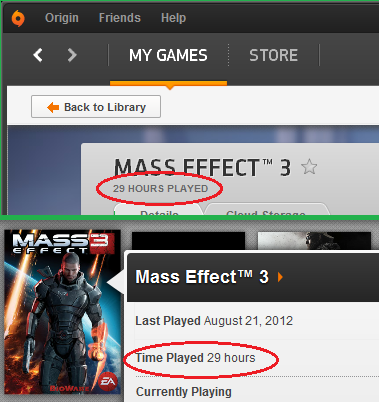 Unfortunately it does not seem that the Origin client has been tracking the time all along, as those play time numbers are a little light in my case.

No. Origin does not track play time in any game at all. The reason you don't see a recording of this metric is because it apparently has not been implemented. Battlefield 3's BattleLog tracks play time for that game and it's conceivable that other games may track this metric internally as well like they do achievements (which Origin also lacks at this point in time), but that would be a game by game consideration.

According to the EA support person whom I just asked whether this feature exists or is planned to be added to origin, their response was, "As such as of now, there is no such system and we do not any updates for future now." Obviously English language support is a feature that could use some revision, but I believe they were trying to say, "we do no get any updates about future plans at this time." I might tend to question the reliability of their customer support given the awkward nature of the interaction, but their customer support responses are expected to be taken as official word so do with that what you will.

The following is a transcript of the conversation substituting ##### for my name and Customer Support Person for the CSR on the other end (be warned: Their English is poor and the responses I got were bizarre at times):

you: Hello. I have a quick question regarding Origin: When I play a game, any game, through Origin, is my playtime being tracked anywhere? Can I view that informatio now or will I be able to in the future?

Customer Support Person: I do understand your concern, #####.

Customer Support Person: But as such there is no such thing which track your time on Origin.

you: Not my time on Origin. My time in-game.

you: I don't think anyone would care about my time on Origin.

Customer Support Person: May I know which game are you trying to play?

Customer Support Person: I am not sure about it.

Customer Support Person: As for Battlefield 3, you can see your play time on Battlelog.

you: Even if you can't see it now, is playtime being recorded for other games? Will it be at some point in the future of Origin?

Customer Support Person: I would definitely make sure that this valuable suggestions of yours will be forwarded to our developers and they will definitely focussing this parameters as well.

Customer Support Person: Thank you for contacting EA. Is there anything else I can help you with today?

you: So the answer is No? Is it being recorded now? Is it in the plan for upcoming features? I'm not so much making a suggestion as asking if it is happening or is planned.

you: So, in summary: You have no idea?

Customer Support Person: As such as of now, there is no such system and we do not any updates for future now.

you: Ok that's all you needed to say. Thanks. That's everything.

To my knowledge there is no visual data available for the enduser that would indicate any sort of gaming time per title.

4
Does Origin have groups and events à la Steam Community?
7
How do I make a shortcut to an origin game?
2
Does Origin support Spore?
1
does origin re-download games for each account?
1
EA origin Game download problem