Is it possible to change the linkage of Nether portals?

I have 3 portals that link together, but I want to remove at least the middle one. 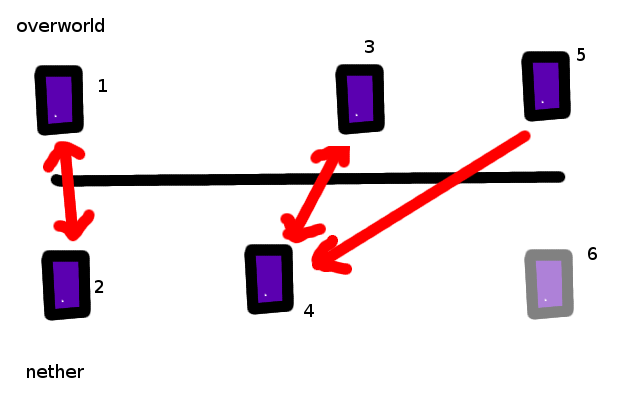 Nether portal have a special algorithm to link.

When you cross a portal in the overworld, it computes the nether exit by dividing the coordinates by 8 (X and Z only). Then the game look for the closest already existing portal within 128 block radius around that position. If there is one, you have your exit. If not, a portal is created.

Reversely, when comming from a nether portal, the game multiplies the coordinates by 8 and look for the closest portal within 1024 block radius around the computed coordinates.

So for the long travel idea you would need to do as this:

In this configuration, the first portal A links to B and B to A by the means of the "closest active portal" rule.

If you need a longer route:

The key here is to exploit the "closest" search algorithm. Do not use original spawned portals cause they are centred in the radius range. Warning, do not build new nether portal after this in the influence zone of your fast travel road. You could easily messed things up.

So if portals are slightly misaligned, you can either build new portals or destroy existing portals in the "correct" locations (as determined by the coordinate system) to change the linkage. However, two portals that correspond correctly will never change destinations to a newly constructed portal unless one of the portals is destroyed.

So here is how I solved it:

I used MCEdit because I think this is a defect in the game, but if you are not lazy like me or want to play without cheating, you can travel in the Nether from 2 and destroy 4, go back via 2, then travel to 3 in the overworld and destroy it there, then travel to 5 and enter (the numbers here correspond to the picture I added in the post).

4
Two sets of nether portals, only one set works both ways