In The Elder Scrolls III:Morrowind, several of the player joinable factions are mutually exclusive, most notably, the three Great Houses of Telvaani, Redoran, and Hlaalu. While I'm familiar with the general bent of each (Telvaani are mages, Redoran warriors, Hlaalu thieves), and I know the general recommendation is "When in Doubt, Choose Telvaani," because the rewards are generally considered superior, and Telvaani is the basis for some excellent mod content as well.

What I'm curious about though is if there's a single listing somewhere comparing the rewards of the three paths against each other, to allow for a choice based on the rewards, rather than the skills involved. The Wiki sadly doesn't consolidate this info, though it has a listing of all the quests for each faction, the rewards are not broken out, so finding them requires a lot of digging. Is there a better resource?

Again, to be clear, I'm specifically interested in only a listing of rewards which are unique or rare items (not gold or soul gems or rep or other things available in abundance elsewhere), which are exclusive to one faction which restricts your ability to join others. The current answers to this question provide a listing of which exclusive factions exist, and of the non-unique rewards for one of these factions. Neither of these is what I am asking for.

No. There is no single list that compiles it all, but I'll do my best to make you one.

Thankfully you are only concerned with "the three Great Houses of Telvaani, Redoran, and Hlaalu" and Vampire Clans as typing up the full list for every faction in the game exceeds the character limit for answers. There are thankfully only 95 Great House quests and 6 Vampire quests.

I typed up all quests and rewards as "rare" could apply to many of the magical items, scrolls and skill books. As quest items are technically unique as there is usually only one of each them, I noted(#) these where applicable. Unique Items are also noted(*). Artifacts are noted(!) a well. Only items exclusively available to the quest or that are needed for the quest have been noted. For reference, he wiki's Unique Armor, Unique Weapons, Unique Clothing, Quest Items, Weapon Artifacts, Armor Artifacts, and Clothing Artifacts pages were referred to and are as close as you are likely to get to a single list of awesome stuff.

Noteworthy items from the Vampire Clans:

What you ask for is difficult to pin down because there is a lot of variation based on player choice. For example here's a quick and dirty chart I came up with just for House Hlaalu. Note: the values listed are the maximum values (assuming the wiki is accurate) you can earn for completing that quest. Many quests award multiple items. The values listed are the sum of all the monetary value of the items you'd receive.

So I did a little digging and I found this table: 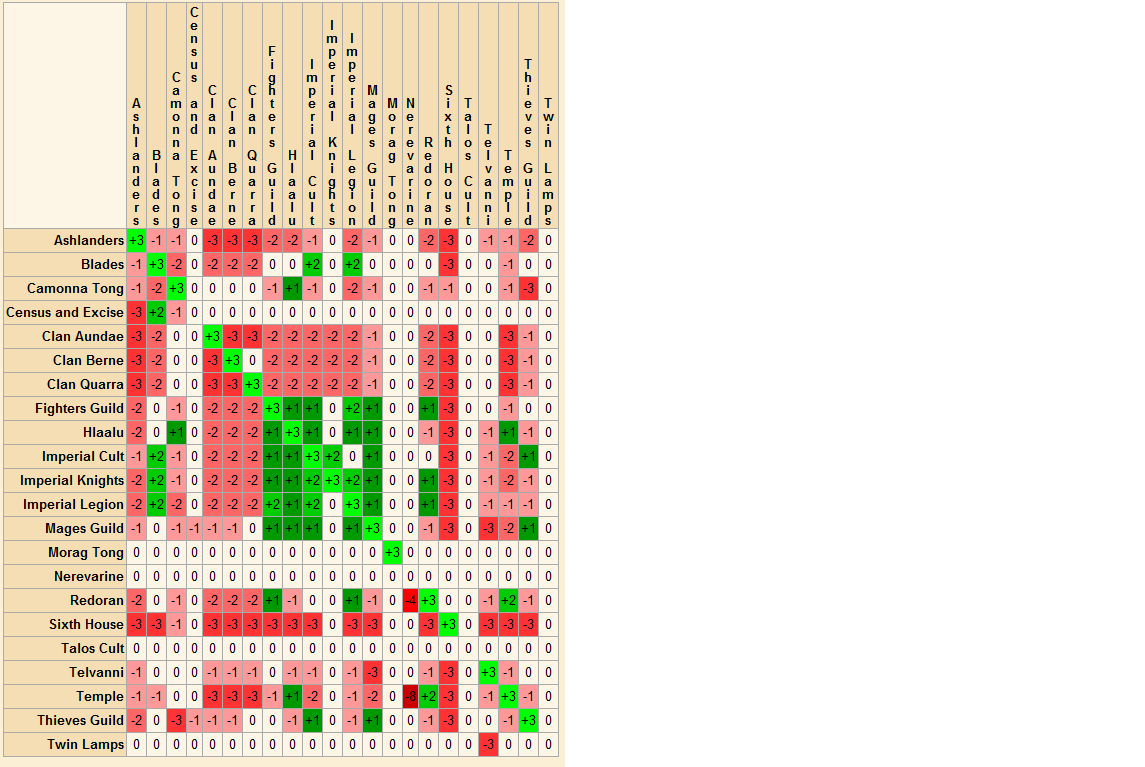 made more helpful by this key:

and finally, this formula:

Now, I'm told you can only join one of the three great houses (at least without the uses of bugs), and you can join both Thieves and Fighters Guilds (though it takes some work) and neither have problems with the mage guild. You can't join the temple once you become Nerevarine, but that's not really related. I think you only join one vampire clan, but I don't have a source for that one.

Let me know if this helps.

As far as item rewards go, Telvanni is by far superior. The only reason not to go telvanni would be if you didn't want your home to be a mushroom tower.

You get glass weapons, dwarven crossbows, enchanted jewelry, as well as an enchanted helmet that lets you conjure a dremora lord and daedric chest and leg armor enchanted with 50 points of feather each. Telvanni is not interested in the affairs of other organizations and are also the most powerful house. Their lords are not concerned with money or even other members of the house.

Redoran and Hlaalu are both relatively bland organizations worried about territorial claims and political infighting. Although some Hlaalu house members are funny, that is about the extent of the character in those houses.

Not the answer you're looking for? Browse other questions tagged the-elder-scrolls-iii-morrowind or ask your own question.